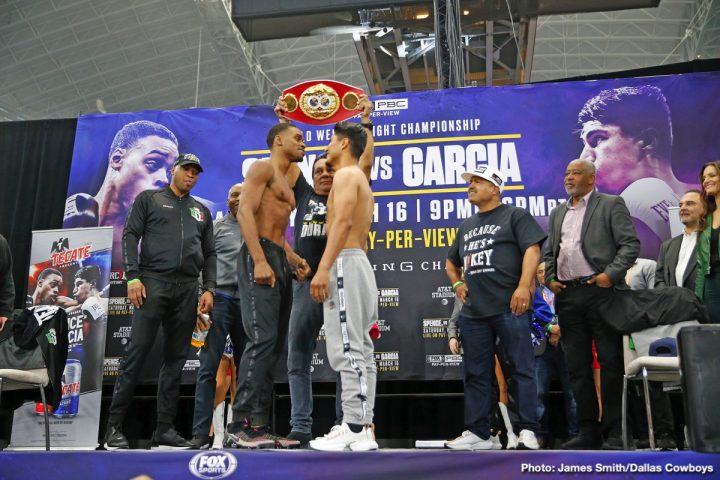 By Allan Fox: Shawn Porter says Saturday night’s fight between Errol Spence Jr. and Mikey Garcia is too evenly matched for him to predict a winner, but he does he’s hoping that the underdog Garcia (39-0, 30 KOs) ends up as the winner. Porter’s rationale for wanting Mikey to win is because he always pulls for the underdog.

Porter is still unsure who wins this fight. He thinks that Mikey’s experience and boxing skills will outweigh Spence’s size, punching power and youth.

IBF welterweight champion Spence (24-0, 21 KOs) will be fighting it out against Garcia in their blockbuster fight on Fox Sports PPV at the AT&T Stadium in Arlington, Texas. Over 50,000 are expected to be at the fight tonight, according to promoter Richard Schaefer.

“I think they’re going to go tit for tat for a while. Both guys are just that good,” Porter said to Fighthub about the Spence vs. Garcia. “If Errol is able to touch Mikey and he sees he can’t handle it, they’re probably going to tell him to turn it up in his corner. I don’t expect a knockout. I expect it to be really competitive.”

Spence isn’t going to wait until he gets back to his corner to have them tell him to go after Mikey to shoot for a knockout. That’s something that Spence already does. He doesn’t need to check in with his trainer to ask him for permission to try ad knock Mikey out. Spence will be on cruise control in that department on Saturday night.

Porter doesn’t say what fighters that he fought that were 6’0″ to 6’5″ in the pro ranks. In looking at Porter’ resume, his best wins were against 5’9″ Yordenis Ugas, who beat by a controversial 12 round decision recently last Saturday night, Danny Garcia [5’7″], Andre Berto [5’6 1/2″], Adrien Broner [5’7″], Adrian Granados [5’9″], Paulie Malignaggi [5’8″], Devon Alexander [5’8″], Phil Lo Greco [5’8″], and Julio Diaz [5’8″]. That’s it. The rest of the fighters Porter has beaten have been obscure journeyman level fighters. Porter never beat a big guy as a pro. So when he says he knows how to beat giants, he’s talking without having a history actually doing that at the pro level in actual fights. Perhaps Porter is talking sparring. The fact, it’s not going to be easy for Mikey Garcia to beat the 5’9 1/2″ Spence on Saturday night, not matter what Porter says about his own personal experience supposedly 6’5″ giants. Spence can actually fight. So, Mikey won’t be able to defend on fighting a guy that has no ability, and it just a big body inside the ring.

“The weight and the power, there’s always ways around it,” Porter said. “Mikey being so technically talented, and having so much experience as he does, that’s going to carry him passed the weight advantage and the power advantage. I’m rooting for the little guy. My head is always for the underdog. That’s just how I am. I’m not calling the winner. This is a 50-50 fight,” Porter said.

Does Porter want Mikey to win because he views him as an easier fight than if he has to face Spence? Porter would likely match-up a lot better against the smaller 5’6″ Mikey than he would against a big fighter like Spence. It’s a better career move for Porter to fight Mikey than if he were to fight a big guy like Spence, who has the size, punching power and the aggression to not only beat Porter but knock him out in the process.

Some boxing fans might think that the only reason why Porter is pulling for Mikey to win is because he’s afraid to fight Spence. At a recent news conference, Spence dropped a bomb on the media by saying that he wanted to fight Porter, but he had to face Mikey after Porter ‘took the easy way out’ by fighting Yordenis Ugas instead of him. Porter says that he had no choice but to fight Ugas because he was the mandatory challenger. However, the World Boxing Council likely would have given Porter the green light to fight IBF champion Spence in a unification fight, because those fights take precedence over mandatory defenses. Porter should know that after this time. Champions are often allowed to swerve their mandatory challengers for a time when they have the opportunity to fight another champion in a unification.

“That was unprofessional on his part to talk about a fight that’s not being made right now,” Porter said about Spence telling the media that Porter took the easy way out by facing Yordenis Ugas instead of facing him in a unification match. “I think he should have stayed in the now and what is and was in Mikey Garcia. Outside of that, he was taking the easy way out, because I took a mandatory challenge, but let’s do word play. The word mandatory means it’s mandatory. It can’t be dodged. It can’t be ducked. So he’s saying I’m ducking him, and dodging him. No, I can’t duck or dodge my mandatory obligation. That was a 30 second brush off,” Porter said about Spence’s first round knockout win over his IBF mandatory Carlos Ocampo.

It’s hard for a lot of boxing fans not to see what Porter did in choosing to fight Yordenis Ugas instead of Spence as anything other than a ducking move on part. Porter can say that he chose to fight Ugas because he has no choice because he was his mandatory challenger, but a lot of the fans already believe Porter intentionally swerved the unification fight against Spence. It looks bad that Porter fought Ugas instead of Spence, and now he’s pulling for Mikey to beat him.

“There’s not more incentive for me to go up there [inside the ring after Saturday’s Spence vs. Garcia fight],” Porter said. “It’s more likely not going to happen tomorrow night, but whatever happens, it’ll be smooth, and I think everybody will enjoy that. It’ll be genuine, and you’ll know what I want after tomorrow night. There’s not going to be a line going up in that ring. No, it’s not Manny’s thing,” Porter said about his belief that Manny Pacquiao won’t enter the ring to challenge the winner of the Spence vs. Garcia fight after the fight is over on Saturday night.

Porter is probably right about Manny Pacquiao not entering the ring after the Spence vs Garcia fight to call out the winner. But that doesn’t mean that Pacquiao won’t make a hone call to try and get the fight negotiated against the winner of the Spence-Garcia fight. Pacquiao doesn’t need to enter the ring in order to negotiate a fight against the Spence vs. Garcia winner. All Manny needs to do to get the winner of that fight is to make a phone call or wave to Spence after the fight to come out of the ring and meet with him. Pacquiao could even get access to Spence’s locker room so that he can call him out there after after the fight. The same applies to Manny going after Mikey if he wins the fight on Saturday.