Gennady Golovkin vs. Kamil Szeremeta in play for June 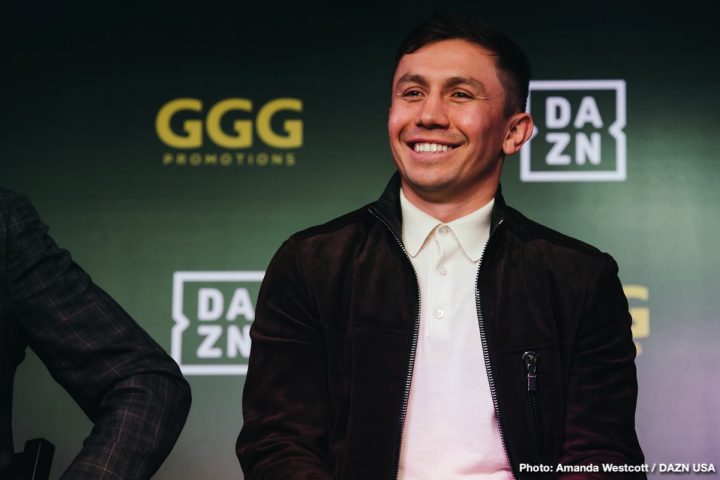 By Mike Smith: Tough as nails Polish fighter Kamil Szeremeta (19-0, 4 KOs) is the name that is being talked about as the first fight for former IBF, WBA and WBC middleweight champion Gennady Golovkin (38-1-1 34 KOs) when he returns to the ring from a 9-month layoff on June 8 or June 16 on DAZN.

Golovkin said that he wants only big fights in his six-fight, 3-year deal with DAZN, but most boxing fans expect his first fight to be a gimme against a fighter that doesn’t possess the talent to beat him. Szeremeta is someone that could give Golovkin all he could handle if he doesn’t fight the right fight against this guy.

Szeremeta, 29, is the EBU middleweight champion, and he’s got a lot of talent. Although he hasn’t taken on any of the more notable fighters in the middleweight division, he’s still a potential threat to GGG if he doesn’t come into the fight in the best shape with a good game plan to beat him.

Golovkin’s two fights against Saul Canelo Alvarez were ones in which he was criticized for using the wrong strategy to win. Golovkin can’t afford to do that against a fighter like Szeremeta, because he’ll outbox him for 12 rounds. If Golovkin is content with trying to beat Szeremeta in a jabbing contest like he did against Canelo in their first fight, he might lose. Szeremeta has superb boxing skills, and he can win rounds by turning up the heat at precise moments. Szeremeta defeated past Golovkin opponent Kassim Ouma by a one-sided 10 round unanimous decision in August 2016. Szeremeta did a better job against Ouma than Golovkin did. Golovkin took a lot of punishment in stopping Ouma in the 10th round in 2011 in what is probably the hardest fight of GGG’s career.

Kamil Szeremeta is an excellent opponent

For what Golovkin needs Szeremeta for, to get the rust out from a long period of inactivity, he’s the perfect opponent for him to accomplish that task. Szeremeta will give Golovkin rounds, and he’ll make him think inside the ring. That’s the important part. GGG has to think more and understand what tricks his opponents are using. Whether boxing fans want to admit it or not, Canelo outsmarted Golovkin in their two fights. He boxed Golovkin from the outside, and moved a long the ropes to nullify his game in the first fight in 2017. Golovkin didn’t want to plow ahead and battle Canelo at medium to close range the way he would have needed to for him to beat him. In the second fight, Canelo walked Golovkin down, and had him backing up. GGG didn’t expected and failed to adapt by holding his ground. GGG didn’t realize how the Nevada judges would interpret him being backed up by Canelo.

Should GGG take a risky fight next?

The fans don’t want to see Golovkin take an unknown fighter as his next opponent. They want him to fight the best available guy, especially now that he’s on DAZN, which is a subscription based service that costs fans $10 per month. While it makes sense for GGG to take a tune-up fight before he faces Canelo Alvarez in September, the fans don’t see it that way. They want value for their money. A risky fight for Golovkin right now would be for him to face WBO middleweight champion Demetrius Andrade (27-0, 17 KOs), who has a world title, and is signed with Matchroom Boxing USA/DAZN. Andrade fights on DAZN, and he’s expected to be back in action around the same time Golovkin is in June. Andrade doesn’t have an opponent, and he’s made it clear to the fans that he wants to fight GGG. The tall 6’1″ southpaw Andrade believes he can beat Golovkin, and his promoter Eddie Hearn is chomping at the bit to make the Golovkin-Andrade fight. If Golovkin doesn’t face Andrade next, he’s going to be seen as having ducked the fight, and that’s going to make him look bad in the eyes of a lot of boxing fans. What made people like Golovkin in the past was his fearlessness, and how he was willing to take on anybody in the middleweight division. The fans no longer think that. Many of them believe Golovkin swerved Jermall Charlo, who the World Boxing Council ordered GGG to face for their interim WBC middleweight title recently. Golovkin didn’t take the fight, and a lot of fans saw that as a duck move by him. If Gennady chooses not to fight Andrade next, people would think that he was afraid of the Rhode Island fighter.

What happens if Golovkin loses?

A loss for Golovkin, 36, in his next fight won’t be as bad a thing as some boxing fans might think it would be. With the history behind Golovkin’s two previous fights with Canelo Alvarez, there will still be massive interest from people wanting to see a third fight between those two stars regardless of what takes place in GGG’s next fight. Obviously a loss for Golovkin against a fighter with a KO percentage of just 21% would be a hard thing for him to swallow, but this is boxing. Szeremeta doesn’t need to knock Golovkin out to beat him, as we saw with Canelo’s recent win over Triple G. Just going the 12 rounds, getting the better of Golovkin, and winning on the cards is good enough.

Canelo fight is waiting for September on DAZN

There’s a huge fight with Canelo Alvarez that is waiting for Golovkin. All he needs to do is to make sure he wins his next fight, and look good in doing so and he’s got the Canelo trilogy fight that he’s been longing for. GGG doesn’t even need to look good in winning his June fight. As long as he wins, he’s got the Canelo fight in September. Canelo, 28, has to win his next fight against IBF middleweight champion Daniel Jacobs (35-2, 29 KOs) on May 4, and that’s not going to be a walk in the park for him. Jacobs is a flawed fighter, and has been beaten in the past, but he’s going to be motivated to the extreme to try and beat Alvarez. It goes without saying that Canelo will be fighting the best possible Jacobs when they fight each on May 4. When Jacobs is at his best, he’s almost impossible to beat. Jacobs beat himself in his losses to Golovkin and Dmitry Pirog in the past by backing up against them, and not coming at them with both guys blazing. If Jacobs comes after Canelo, he might defeat him. That would likely throw off Golovkin’s plans for a September rematch. It’s naturally assumed that Canelo will beat Jacobs, but we might see an upset in that fight. if that happens, Golovkin will have to fight someone else in his second fight with DAZN later this year.