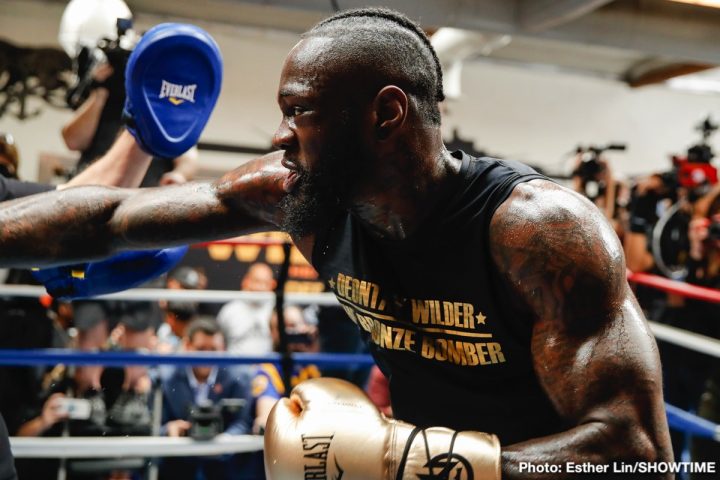 By Tim Royner: Anthony Joshua’s promoter Eddie Hearn is optimistic that DAZN will be able to sign WBC heavyweight champion Deontay Wilder to a contract for him to fight IBF/WBA/WBO champion Anthony Joshua later this year in November or December, according to Sky. Even if Wilder loses his first fight of his 2-fight contract with DAZN, he will likely face Joshua in the second match.

Wilder (40-0-1, 39 KOs) reportedly has been offered $50M for two fights with DAZN, which is a smart deal for the streaming company. Wilder, 33, and his management met with DAZN on Tuesday to discuss signing with them. If the news of the $50 million offer is accurate, it would see Wilder make $25 million for each of his two fights with DAZN.

Wilder’s first fight of the 2-fight deal would be against World Boxing Council mandatory challenger Dominic Breazeale (20-1, 18 KOs). That contest is expected to take place on May 18 at the Barclays Center in Brooklyn, New York. It’s currently scheduled to take place on Showtime pay-per-view, but that would change obviously if Wilder signs a two-fight deal with DAZN.

The potential negative of Wilder signing with DAZN is they will likely want a say in who he faces. For example, if Wilder chooses to fight someone that DAZN isn’t on board with for his second fight of his 2-fight contract, if the Joshua fight can’t be made, then there could be problems.

After the two-fight deal with DAZN is competed, Wilder would need to renegotiate for another deal with the company for his rematch with Joshua, as those are expected to face each other twice if not three times depending on how the two matches go.

Wilder’s deal with DAZN is complicated due to the deal including a fight with Joshua for the undisputed heavyweight championship.

“It’s very encouraging,” Hearn said to skysports.com about the news of Wilder negotiating with DAZN. “I think there’s an opportunity there for someone to be a mediator to get the fight done. I think this is a route that is going to be very beneficial to the making of that undisputed fight. “It’s not just about doing a deal with Wilder, it’s about doing a deal with Joshua,” Hearn said.

Hearn won’t be involved in the Wilder-DAZN negotiations obviously, as there’s a lot of bad blood between him and Wilder due to the failed negotiations in the past for a Wilder-Joshua fight.

Wilder making the big money that is being talked about with DAZN clearly dwarfs the $12.5 million offer from Top Rank Boxing that Deontay received, and the offers that Hearn has given him in the last.

Joshua (22-0, 21 KOs) has a title defense he needs to make on June 1 against Jarrell ‘Big Baby’ Miller. Joshua will need to win that fight for the possibility of a unification match against Wilder to happen later on this year.