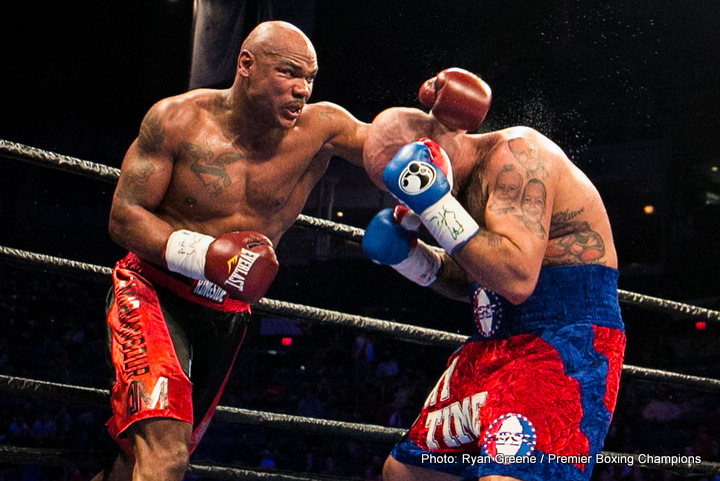 By Gav Duthie: Amir Mansour 23-4-1 (16) one of the most avoided boxers in the heavyweight division for a few years is now looking at a ‘what could have been’ career after back to back stoppage defeats. In failing to secure any big name fights after great performances against Gerald Washington, Dominic Breazeale and Travis Kauffmann he took on three heavyweight prospects and in the last two was outgunned, out muscled and looked every bit of his 46 years of age.

Mansour could still make a living fighting prospects but at his age he should seriously consider retirement. He is probably someone who will be quickly forgotten about. A stepping stone, maybe the first big win for someone who looks special in Efe Ajagba but Mansour didn’t really get the chance to show us more and here’s why.

Why would a 46 year old who seems dedicated to boxing only have 28 fights? Maybe he started late? A bouncer who could bang a bit? Absolutely not. A man of now Muslim faith was born in America as Lavern Moorer who made his boxing debut in 1997 around the time Shannon Briggs was dethroning the oldest heavyweight boxing champion in George Foreman. Little did Mansour know that 22 years later he would be still scraping about having fought less than 30 times. Mansour wasn’t hugely active but reached a respectable 9-0 (6) by 2001. His 10th fight came 9 years later in 2010. He spent 8 and a half years in jail on a controlled substance charge. In March 2010 he was sent to a half way house and wasted no time resuming his boxing career in August that year aged 37. He picked up where he left off despite his advancing years and maybe still had a chance. He started to pick up some good wins defeating Dominic Guinn, respected journeyman Epifiano Mendoza and retiring touted prospect Kelvin Price stopping him in 7 rounds. He lost a decision to the skillful Steve Cunningham which derailed him somewhat. In fights against Gerald Washington onlookers were disgusted to see a draw when many thought Mansour won and then against 2012 Olympian Dominic Breazeale when possibly winning he swallowed his tongue and the fight had to be stopped in Breazeale’s favour. The fight was one of the best of the year in 2016 yet Mansour saw his opportunities limited despite his crowd appeal he was a bit too dangerous. After he gained a respectable decision win over Travis Kauffmann he was inserted #13 with the WBC but taken out again within a few months. Knowing at his age he needed to be active, strike while the iron was hot he was doing the opposite through no fault of his own. In getting little chance to boost his ranking he agreed to face Russian prospect Sergey Kuzmin which ended in a no contest through injury but even then the fire in his belly seemed to have gone.

Within the last 6 months he has been stopped by 2012 Olympic bronze medalist Filip Hrgovic in 3 rounds and now talented Nigerian Efe Ajagba in 2. At the weekend he quit on his stool after prolonged punishment and he should stay there. He is still decent and I am sure if he carried on he might have the odd chance to expose the Kelvin Prices of the boxing world but he will be doing more damage to himself than good. He is 46 years old and could seriously hurt himself. He should be proud of what he has achieved. He lost 9 years between age 28 and 37, his own doing I might add, but prime years none the less. He can retire safe in the knowledge that he gave it all he had with the time he was given.

« Sam Bowen To Face Mccorry In Leicester Defence on March 23

Gennady Golovkin vs. Kamil Szeremeta in play for June »