Joshua wants Wilder fight by end of the year 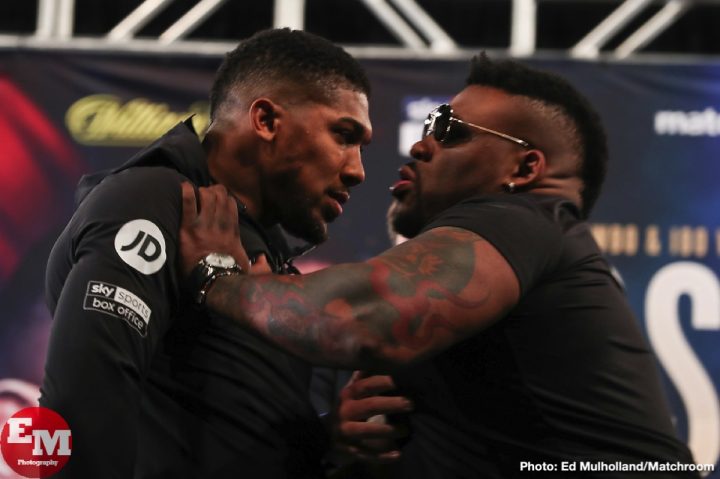 By Jeff Aranow: Anthony Joshua is prioritizing a unification fight against WBC heavyweight champion Deontay Wilder by the end of this year after he gets past challenger Jarrell ‘Big Baby’ Miller on June 1 on DAZN at Madison Square Garden in New York.

Joshua (22-0, 21 KOs) says he sees the chances of a unification fight against Wilder (40-0-1, 39 KOs) as diminishing with each passing fight. He noted that Wilder almost lost his last fight against Tyson Fury, and he could lose in the future if he has to face ‘Big Baby’ Miller. Joshua thinks Miller has the talent to make it a hard fight for Wilder, and potentially beat him.

The boxing fans want to see the Wilder vs. Joshua fight, but it doesn’t look like the fight is doable right now given the purse demands for the two fighters. It might workout in Joshua’s favor that Tyson Fury has signed with Top Rank Boxing, and will be fighting on ESPN. Top Rank promoter Bob Arum is said to want to let the Wilder vs. Fury II fight marinate so that it can become a big pay-per-view bout. If Arum wants to put the Wilder vs. Fury fight off for 2 to 4 fights before he eventually tries to put them back in with one another, it’s going to leave Deontay with the need to fight Joshua for him to get a big payday. If Wilder is looking at having to make a lot of tough title defenses against the likes of Dillian Whyte, Adam Kownacki and Dominic Breazeale, he might all of a sudden start showing interest in fighting AJ in order to get a big payday before he eventually loses his WBC title. It’ll depend on how confident Wilder is, and how patient he is. If he feels he can hold onto his title for a long time to come, then he won’t mind that Joshua isn’t willing to give him the purse that he’s asking for. Wilder will just keep defending his WBC title until he does eventually get a purse split that he’s asking for.

“I need to get past Miller so I can put my sites on fighting (Wilder) and he needs to fight and win so he can put his sites on fighting me before this year is out,” Joshua said to ESPN.com. The longer we leave it the less likely the fight will happen.”

Even if Wilder or Joshua lose to someone, it won’t keep the fight between them from still happening. Joshua is putting too much emphasis on the two of them needing to be unbeaten in order to fight each other. Most of the guys that Joshua and Wilder has faced before have losses on their records. Miller, 30, is one of the handful of fighters that Joshua has fought that was unbeaten when he fought. The best fighter on Joshua’s resume as a pro, Wladimir Klitschko, came into their fight with three losses, and he still almost beat him.

Joshua thinks Wilder should forget about the money, and just take the fight with him. It doesn’t work that way though. Wilder isn’t going to say yes to the fight unless they get this deal hammered out. Joshua might as well not even bring up the subject of Wilder unless he’s willing to give him the deal that he’s asking for with the 50-50 purse split.

Joshua is talking about Wilder being frozen out if he doesn’t take the fight with him this year. Joshua is pretty confident that he’s going to be able to get a fight against Tyson Fury, and then two of them will have Wilder put on the sidelines watching them face each other in repeated contests. That might not be a realistic viewpoint. Fury’s new promoters at Top Rank might choose to let even the Joshua vs. Fury fight marinate, and that could take ages. It’s possible that Fury loses to one of Top Rank’s stable fighters like Kubrat Pulev, Oscar Rivas or Bryant Jennings while they’re trying to let the Joshua-Fury fight marinate a much as possible. There are fights that Joshua’s promoter can get for him that would be easy. Wilder and Fury are not going to be simple fights to make given what they’re asking for before the fights can get made. With Fury, it’s not just the purse requirements that could keep the fight with Joshua not happening. It’s also his new promoter Bob Arums’s vision of the fights needing to marinate as much as possible.

“I think Wilder, if he misses another opportunity, he could be left out for a little while,” Joshua said. “He might have to fight someone like (Miller), who’s a danger man for him and he might get beat in the process.

If Miller loses to Joshua on June 1, then his ranking are going to drop with the other sanctioning bodies. Miller currently isn’t rated in the top 15 by the World Boxing Council. Wilder mostly fights contenders in the WBC’s top 15 rankings. He’s not going to deviate from the practice to fight someone coming off of a loss to Joshua. It’s safe to say that Miller won’t be getting a fight against Wilder anytime soon, if ever, if he loses to Joshua.