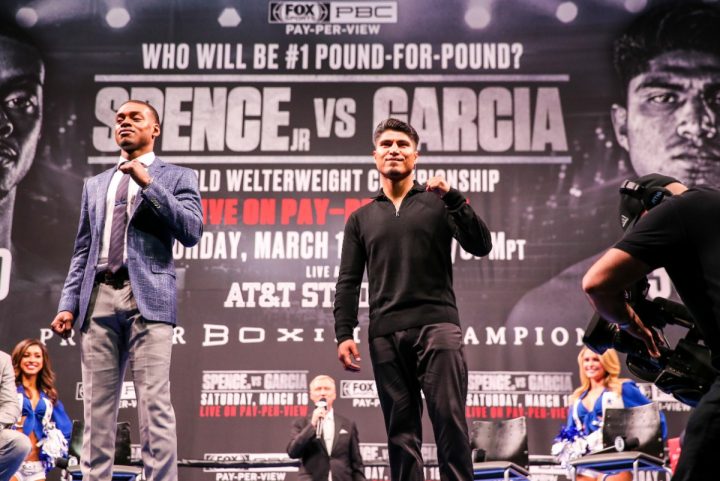 By Aragon Garcia: IBF welterweight champion Errol Spence Jr. has a confident outlook about his upcoming fight against unbeaten four-time world title challenger Mikey Garcia on March 16 next month on Fox PPV at the AT&T Stadium in Arlington, Texas.

Spence (24-0, 21 Kos) says he doesn’t care how much extra size and strength Mikey will have for their fight next month. He’s still going to beat him with his intelligence, and his boxing skills. For all that, Spence is facing a fighter with unquestionably better skills than him, experience and ring IQ. In the end, what this fight boils down to, whether Errol wants to admit it or not, is whether his size will play a factor or not in the outcome.

“I train old school so I don’t worry about how Mikey is planning to get stronger at the weight,” Spence said during Saturday’s news conference with Mikey in Los Angeles. “I’m not worried about it and I don’t think it will make a difference in the fight,” Spence said.

Spence’s size is the only thing he has in his favor in this fight. Everything else is tilted in Garcia’s favor. Even the power might slightly be in Garcia’s favor. The reason being for that is speed is power, and Mikey always hits with a ton of bricks when throwing slower shots. But when he’s throwing with speed, he’s a better puncher than Spence punch per punch. Spence’s boxing fans can dispute this until their blue in the face, but one can see how much better Mikey’s power is in watching how his light welterweight opponents Adrien Broner and Sergey Lipinets reacted each time he hit them.

“Size always matters, but when you get in there, at the end of the day, it’s about skills and intelligence,” Spence said in sounding like he’s trying to instill confidence in himself. “I’m not going to rely on size. I’m going to focus on my talent.”

Spence always relies on size to win his fights. He bulldozes his opponents with his size, and he always has done that. One only needs to look at some of Spence’s fights in the last four years to understand that he swarms his opponents from the outset of the fights, using his brute strength, and yes, size, to beat them into submission.

Here are some examples of fights in which Spence overpowered his smaller and/or weaker opponents with his size:

– Carlos Ocampo: although a little taller than Spence at 5’10 1/2″, he nowhere near the same power as him.

– Lamont Peterson: Close to the same height as Spence at 5’9″, Peterson didn’t have the strength to stand up to him. The result was an easy seventh round knockout for Errol last January. This fight was a mismatch on paper. It was clear from the time the fight was signed that Peterson didn’t have a chance against Spence. An earlier loss to Danny Garcia in 2015 showed that Peterson was not in the same class as Spence.

“If I can roll through him, then I’ll show my killer instinct and try to get him out of there. I’m going to use my ability to break him down,” Spence said.

Spence is going to try roll through Mikey, because that’s what he does in his fights. Spence likes to impose his size, and try and smash his opponents as fast as possible to get them out of there. He used to be a lot more subtle earlier in his career, but he’s gotten to the point now where he tries to crush his smaller, less talented prey right off the bat to get them out of there before they get a chance to start landing on his chin.

“At first I thought he was just chasing my name when he was calling me out. Once it became real, I saw how serious he was,” Spence said.

Mikey, 31, isn’t the type of fighter that name drops in order to gain status in the boxing world the easy way without having to prove himself inside the ring against them. Some fighters do that obviously, but Garcia isn’t one of them. He’s proven in the past that he’s always been willing to take on the best, so it’s not even open to debate whether he would deviate from that by using Spence’s name to gain fame the easy way without having a true intent in fighting him inside the ring. When Mikey started calling Spence out, he was serious, and he showed that by signing the contract for the fight. Mikey sees Spence as a flawed fighter, riddled with holes in his game like Swiss Cheese, and he plans on taking full advantage of those flaws when he gets him inside the ring on March 16 at the AT&T Stadium in Arlington, Texas.

“I’m not the bully here because Mikey really pushed for the fight,” Spence said in trying to defend the boxing critics, who have labeled him as a big “bully for agreeing to fight a guy that is 3 1/2” inches shorter than him, and fights in a weight class three divisions below him at lightweight. The other champions weren’t available at the time, plus Mikey is the only top fighter who called me out.”

It’s not for Spence to say whether he’s a weight bully or not. That’s something that only the boxing public can decide on. If they view Spence as a weight bully, then that’s what they feel. It’s not something that Spence can change by merely telling the fans that he’s not a weight bully. Spence can say anything, but that doesn’t necessarily make it so. If Spence wants the boxing fans to stop calling him a weight bully, then he’s going to need to stop fighting smaller guys, and move up to a weight class that is more in line with his body size, which would be junior middleweight [154 lbs]. A lot of fans think Spence is a true junior middleweight, who melts down to 147 to enjoy a weight and size advantage over the smaller guys in that division. If Spence moves up to junior middleweight and fights guys in that weight class or higher, then people won’t be able to call him a weight bully anymore because he’ll be facing guys his own size or bigger. In the end, it’ll be a better move for Spence, because he might get lucky and get a fight with Saul Canelo Alvarez or Gennady Golovkin one of these days. If nothing else, Spence won’t have to chase the other fighters at 154 and 160 like he’s been doing at 147. Spence has been waiting four years for Keith ‘One Time’ Thurman to finally fight him. Spence can probably forget about Manny Pacquiao, Amir Khan or Shawn Porter ever facing him. The only guy at 147 that wants to face Spence is WBO champion Terence Crawford, but he’s with Top Rank Boxing, so that’s a fight that likely won’t ever happen.

“I don’t see him as that small a fighter. He has a technical style that’s very traditional. He likes to use angles to set his opponent’s up,” Spence said.

Standing next to Mikey, Spence has to see him as a smaller fighter. Spence is saying he doesn’t see Mikey as a smaller fighter, but on the night of the fight, it’s almost guaranteed that Errol will rush forward and try and steamroller this smaller opponent to get him out of there as quick as he can. If Spence was facing someone his own size or bigger like the 6’1″ Jarrett Hurd, he wouldn’t try and jump on them like that. It would be a major mistake if Spence did try and fight like that. Hurd would be all over him with his size and power, and would have a good chance of wearing him down.

Mikey’s technical style of fighting is going to give him the ability to pick Spence apart with shots if he chooses to rush him like he’s been doing in his fights lately. Spence leaves himself open when he rushes his opponents, and he can countered by smart fighters like Garcia, Crawford and Thurman. Spence hasn’t fought anyone with that kind of talent that can take advantage of his aggressiveness to get to him when he overreaches like that. Mikey could be that guy unless Spence plays it save, and decides he wants to keep the action on the outside where he can utilize his long reach and jab to control the pace of the fight. That would be Spence’s best way of trying to win this fight. If he rushes Mikey like he’s doing with his opponents his entire career, he’s going to get clipped with something, and possibly hurt. Emmanuel Lartei Lartey had Spence hurt in the sixth round of their fight in October 2013 after catching him coming in. Spence had to hold on to keep from getting knocked out. The remainder of the fight, Spence stayed on the outside and boxed Lartey, but it was still a very hard fight for him. Lartey was landing big shots on Spence, and he didn’t want anymore by the time the fight was over. Spence won the fight by the scores 79-73, 79-73 and 79-73, but it was far from an easy contest for him. The way that Lartey hurt Spence with a shot while he was trying to bulldoze him, it’s the same thing Mikey will be looking to do against him if he fights him in the same careless manner on March 16. Spence’s lack of caution in his fights could be his undoing against Mikey. It’ll be a bad thing for Spence if he doesn’t change his fighting style to treat Mikey like a real threat.