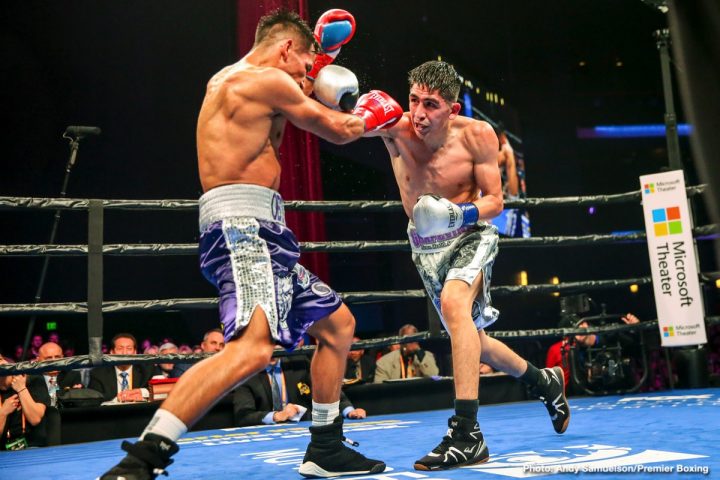 Santa Cruz beat Rivera by the scores 119-109, 119-109 and 119-109 in their fight on Premier Boxing Champions on FOX and FOX Deportes last Saturday night. 1,273 punches were thrown by Santa Cruz in beating #11 WBA Rivera. Despite all the punches thrown, it wasn’t an exciting fight due to the lack of competitiveness of the match. It was clear from watching the fight that Santa Cruz needs to be facing better guys than Rivera.

Santa Cruz wants to be busy in 2019 by fighting three times after fighting just once in 2018. Santa Cruz, 30, wants to step it up against better opposition. His last two fights against Rivera, 24, and 33-year-old Abner Mares weren’t against the best at featherweight unfortunately. Mares at one time was one of the best, but he was a shell of his former self in the rematch with Santa Cruz last June.

“I want to unify the belts against anybody, the champions Oscar Valdez, Gary Russell, Josh Warrington, even a third fight against (former titlist) Carl Frampton,” Santa Cruz said. “Any of those fights, I want them.”

IBF featherweight champion Josh Warrington (28-0, 6 KOs) would be a good option if Leo’s management at Premier Boxing Champions are able to put a deal together with the British fighter’s promoters. It’s possible, but it might take traveling on Santa Cruz’s part to the UK for him to get the fight. It’s doubtful that Warrington’s promoters would give him the green light to travel to the U.S to face Santa Cruz in front of his own boxing fans in Southern California. You never know though.

WBO champion Oscar Valdez is an undo-able fight due to him being with Top Rank. It would take a miracle for a fight between Santa Cruz and Valdez to get made, and it’s not even worth contemplating right now. It would be a rare comet shooting across the sky. Yeah, it could happen, but it’s unlikely. Top Rank has good a good thing with Valdez having him defend his World Boxing Organization title against the guys the WBO has ranked in their top 15. There’s virtually no threats on the horizon for Valdez in the foreseeable future, and that’s likely going to stay that way for years to come.

WBC champion Gary Russell Jr. (29-1, 17 KOs) is easily the best option for Santa Cruz if he’s serious about wanting to fight a unification match against one of the 126 lb champions. Like Santa Cruz, Russell Jr., 30, is managed by Premier Boxing Champions, and he would likely be very interested in a fight against Leo is he wants that fight. However, Santa Cruz has to be forewarned, that Russell Jr. is someone that could very well beat him, and do it in style. Russell Jr. looked unbeatable in his last fight in taking previously undefeated Joseph Diaz Jr. to school in winning a wide 12 round unanimous decision over him last May.

Santa Cruz says he would even settle for a third fight against Carl Frampton if he can’t get the other three champions at 126 to fight him. Former two division world champion Frampton (26-2, 15 KOs) beat Santa Cruz by a questionable 12 round majority decision in their first fight in July 2016 in New York. In their rematch six months later in January 2017, Santa Cruz avenged his loss in beating Frampton by a 12 round majority decision in Las Vegas, Nevada. Santa Cruz and Frampton should have already fought each other in a trilogy fight by now.

At this point, it’s a waste of time for Santa Cruz to face Frampton in a third fight due the Irish fighter having lost his last fight to Warrington by a 12 round unanimous decision last December. Frampton looked like a faded guy against Warrington. Frampton didn’t just look bad in that fight. He also looked poor against Nonito Donaire and Horacio Garcia. If the idea is just to make money, then Santa Cruz will likely schedule a third fight with Frampton, as it would be a similar business type of fight as his rematch with Mares.

There was no point in Santa Cruz fighting Mares a second time other than to make money, but the fight was made anyway. If Santa Cruz chooses Frampton, it would be the same kind of situation. If Santa Cruz wants to prove himself to the boxing public as one of the best at 126, then he’ll go after Russell Jr., Valdez or Warrington. For Santa Cruz to get a third fight with Frampton, he would probably need to agree to travel to Ireland for the fight to happen. Frampton feels like things would have been different if their second fight had taken place in Ireland rather than the U.S. He didn’t agree with the scoring of the fight, and felt that he should have been given the not.

Frampton’s recent loss to Warrington now puts him in a spot where he cannot afford a second loss in a row if he wants to stay relevant. That might make it difficult for Santa Cruz to put a third fight together with Frampton unless he’s willing to travel to the UK to fight him in his own backyard in Northern Ireland in front of his loyal Irish boxing fans. It would be a big risk on Santa Cruz’s part in traveling there to take the fight, but the money would likely be good. The fight wouldn’t prove much, though, because Frampton was dominated in his last fight against Warrington in Manchester, England. The way Warrington beat Frampton, it wouldn’t have mattered if the fight had taken place in his backyard in Northern Ireland. He still would have lost.

“[I will be back in] June or July,” Santa Cruz said. “I want to be back and hopefully fight three times this year against the best in the division.”

With Santa Cruz returning to the ring in June or July, that’s not much time for him to negotiate a fight against one of the big dogs in the featherweight division. If Santa Cruz wants to put together a fight against Russell Jr., Warrington, Valdez or Frampton, he’s going to need to be a little more flexible with the scheduling of his next fight. Getting back in the ring in just four to five months from now might be too soon to negotiate a fight against one of the other champions at 126. Santa Cruz is willing to fight one of the non-champions like Frampton or Diaz Jr., then June or July might work with one of those guys. Frampton is considered past his prime in the eyes of a lot of boxing fans. Santa Cruz might not get much credit for beating him a second time.

Out of all the guys that Santa Cruz called out last Saturday night, Russell Jr. is the only one that has a realistic chance of happening. But again, Santa Cruz saying the fight has to happen in June or July might make it problematic in putting together a fight against Russell Jr., who only fights once a year for some reason. Russell Jr’s last fight was in May, so it’s likely that he won’t be back inside the ring until late 2019.

Santa Cruz used his height and reach to work over Rivera with body shots last night. It was a case of Santa Cruz being too busy with his work rate for the smaller Rivera to get his shots off to make it a competitive fight. Rivera showed a good chin though in taking countless uppercuts from Santa Cruz in the fight.

“I’m very happy with my performance and I thought I gave everyone a great fight,” Rivera said after his fight with Santa Cruz. “I was in there with one of the best fighters in the world and throwing punches and exchanging with him.”

Rafael “Big Bang” Rivera tried his best to land one of his big shots on the chin of Santa Cruz all night long, but he was never able to hurt him with anything. Rivera took the fight on 3 week’s notice after Santa Cruz’s originally scheduled opponent Miguel Flores dropped out because of a training camp injury. Rivera fought well in spurts in the fight. He landed some good shots in the 9th, and in the last moments of the 12th. Other than that, Rivera was target practice for Santa Cruz with his 1,273 punches thrown during the contest.

Not surprisingly, the final punch stats were lopsided in Santa Cruz’s favor. He connected on 334 shots out of 1,273 punches thrown for a connect percentage of 26, according to CompuBox. Santa Cruz’s highest punch output came seven years ago in 2012 in his fight against Vusi Malinga. Santa Cruz threw 1,350 shots in that fight, but that was when he was fighting at bantamweight.

For his part, Rivera landed 151 of 805 shots for a much lower 19 percent connect percentage. Throwing 805 shots is nothing to dismiss. That’s a lot of punches thrown by Rivera, and even though he missed a lot of them, he still connected on 151 shots. Santa Cruz was in a fight last night, even though it was a massacre for the most part. Rivera made Santa Cruz feel like he was in a tough fight despite the scores being wide in Leo’s favor in the end of the fight. Santa Cruz’s purse for the fight was $1 million compared to $20,000 for Rivera. If Santa Cruz wants to make more money, he’s going to have to step it up against one of the other world champions at featherweight or a trilogy fight against Frampton.

If Santa Cruz is unable to get the fights that he wants against the other champions or a third fight with Frampton, then his main goal is to just be active by fighting three times this year. That’s one of the reasons why Santa Cruz has already made it known that he’s going to be fighting in June or July, so that would be his second fight in 2019. Barring any injuries, Santa Cruz will likely be back in December for his third fight of the year. For Santa Cruz to be involved in the really big fights, he may need to move up to super featherweight to go after the likes of Gervonta ‘Tank’ Davis and Tevin Farmer. Being at 130 has it’s advantages for Santa Cruz, as he would be within striking distance of the lightweight division. There would potentially be the possibility of Santa Cruz fighting talents like Vasyl Lomachenko and Teofimo Lopez, as long as Top Rank were open to those matches taking place. There would also be the chance of Santa Cruz facing Jorge Linares at lightweight. That would be a great fight for boxing fans to see. Anthony Crolla would be a good option for Santa Cruz as well.