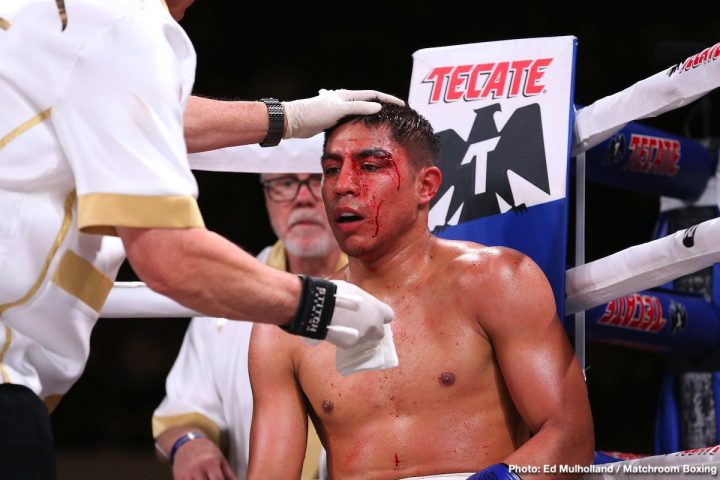 By Barry Holbrook: Jessie Vargas (29-2-2, 11 KOs) accomplished his goal of knocking out former two division world champion Humberto Soto (69-10-2, 38 KOs) in the sixth round last Friday night in a catch-weight fight at 151 pounds, and he now wants to move forward to challenge for world titles against either WBO junior middleweight champ Jaime Munguia or IBF/WBA champion Jarrett Hurd.

The former two division world champion Jessie Vargas wants to capture a third division world title against 154 lb champions Munguia and Hurd if possible. For the time being, Vargas, 29, will be healing up from a nasty cut that he suffered over his left eye from a head-butt that occurred in round two against the 38-year-old Soto last night at The Forum in Inglewood, California.

Soto, 5’7″, put in a game effort in the first four rounds, but the size and strength of Vargas proved to be too much for him. Vargas deposited Soto on the canvas in the sixth after hitting him flush with a powerful right hand. Soto was coming forward just as Vargas unloaded with a booming right hand that sent him flying backwards, landing on the seat of his pants on the canvas. After Soto got back to his feet, Vargas went after him with vengeance, unleashing a torrent of big power shots that drove him back against the ropes. Almost defenseless, Soto took massive power shots to the head until referee Thomas Taylor stepped in and stopped the fight at 1:48 of round six.

“I would tell him a fight between him and I would be very interesting for the fans, and for him and I as well,” Vargas said to Fino Boxing in discussing his desire to face WBO junior middleweight champion Jaime Munguia next. “Also, Jarrett Hurd has a fight coming up. That would be interesting as well. I like that fight for me. I’m pursuing the guys with the belts. Hurd is an intelligent fighter, but we can make a good fight together. I know it, and that’s the reason his name came up. We’re in this business to become world champions. He’s a target. We hope we can make it happen,” Vargas said.

Hurd, 28, will be defending his IBF/WBA 154 lb titles next month against challenge Julian “J-Rock” Williams (26-1-1, 16 KOs) on May 11 on Premier Boxing Champions on Fox at the EagleBank Arena, in Fairfax, Virginia. As long as Hurd wins that fight without injury, he might be interested in facing Vargas, but not likely. Hurd wants to face the winner of the June 23 rematch between WBC junior middleweight champion Tony Harrison and Jermell Charlo. Hurd vs. the winner of the Harrison-Charlo II contest is a bigger fight than Hurd defending against Vargas. That’s not a knock on Vargas, but he really hasn’t beaten anyone yet at 154. His fight last Friday against former super featherweight and lightweight world champion Humberto Soto wasn’t against a junior middleweight.

If Vargas had beaten an elite level 154 lb fighter like Erislandy Lara, then he might be considered by Hurd and his management at Premier Boxing Champions. It’s going to be hard for Vargas to get a fight against the likes of Hurd due to the two fighting on different network platforms. Vargas is with DAZN, and Hurd with PBC. It’s more likely than not that the only way Vargas gets a fight against Hurd, Harrison or Charlo is if he becomes a mandatory challenger to one of them. Charlo isn’t a world champion at the moment.

WBO 154 lb champion Munguia is the more likely fight for Vargas. Whether Vargas’ promoter Eddie Hearn of Matchroom Boxing USA can make that fight before Munguia moves up to 160 is unknown. Vargas’ injured left eye could make it difficult for him to get the match against Munguia before he moves up to middleweight. We’ll have to see.

“I want him to fight Jaime Munguia,” Hearn said to secondsout about Jessie Vargas following his victory over Humberto Soto last Friday night. “It was a bad cut. He’s not going to be ready until September or October. I think that’s a natural fight,” Hearn said about a match between WBO junior middleweight champion Munguia and Vargas. “Jessie Vargas and Jaime Munguia are both with DAZN. It will be a fight where Jessie can become a three belt world champion. I’d love to be able to get it for him. I’ll keep my fingers crossed. Kell Brook is aiming for the Terence Crawford fight. We’ll see if we can get him that,” Hearn said.

WBO 154 lb champion Munguia (33-0, 26 KOs) barely won his last fight against mandatory Dennis Hogan (28-2, 7 KOs) in winning a close 12 round majority decision on April 13 in Monterrey, Mexico. That was a fight that was close enough to go either way. Vargas would have a good shot at beating Munguia. What would work against Vargas winning obviously is the youth, size, punching power and the activity level of Munguia. The young 22-year-old Munguia is capable of throwing huge power shots all night long. Hogan, 34, was able to avoid most of the big punches that Munguia was throwing. Vargas isn’t as skilled on defense. If Munguia is able to land his power shots against him, the fight won’t last long.

Vargas’s purse for the Soto fight was $1.2 million, which is more than what the main event fighters Srisaket Sor Rungvisai and Juan Francisco Estrada received in total. Rungvisai’s purse for the fight was $500,000, and Estrada got $200,000. It’s kind of interesting that Vargas made more than the two main event fighters together when his fight wasn’t even the co-feature bout. The purses for the co-feature fighters were as follows: Daniel Roman $200,000, and IBF super bantamweight champion TJ Doheny $230,000.

“There’s options, either Hurd or Munguia are the fighters that interest me,” Vargas said. “The name Kell Brook was just mentioned. I’m interested. It just seems like he wastes my time. I wouldn’t even bother mentioning his name anymore. If he wants to make the fight, he can talk to Eddie, and Eddie can make the fight happen. The 154 lb division is where I’m staying. I’m looking forward to becoming a world champion. I’m going to push forward,” Vargas said.

Hearn already said that he plans on using Kell Brook to match against WBO welterweight champion Terence Crawford. He’s not going to match Brook against Vargas, because he doesn’t have the size to fight at 154. Even if Brook did beat Munguia, he wouldn’t likely hold onto the WBO junior middleweight title for long once he’s forced to defend the belt against a good 154 pounder with size, power and boxing skills.

“I discontinued the non-knockout streak,” Vargas said about his knockout win over Soto. “It had been over five years. I knocking guys down. I don’t say a lot that I want to knock guys out, but we’re in the hurt business. They don’t pay overtime. You know what? I didn’t look for the knockout,” Vargas said about his fight with Humberto Soto. “I was just trying to land some good, clean shots, and pick him apart little by little. I saw him hurt. I said I’m going to go for the kill, because I remember what Freddie [Roach] said; ‘You’ve got to get mean in there, Man. You can’t be so nice.’ I’m nice outside the ring, but inside the ring, I’ve got to be a beast,” Vargas said.

Vargas needs to put things in perspective. Yeah, he knocked out 38-year-old former super featherweight champion Soto last Friday night, but he did it against an older fighter that had no business fighting at junior middleweight. This knockout win was more a product of careful match-making by Vargas’ promoter Eddie Hearn more so that an indication that he’s a knockout artist at 154. Hearn chose to match Vargas against a older fighter that was fighting three divisions above his ideal weight class. If Vargas can knockout guys like Hurd, Harrison, Charlo, Lara J-Rock, Erickson Lubin and Liam Smith, then you can give him credit.

Prograis vs. Relikh & Donaire vs. Young tonight on DAZN »