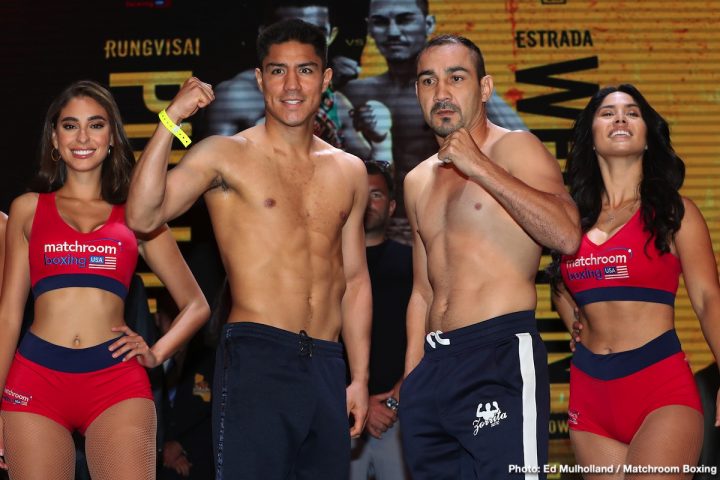 By Dan Ambrose: Jessie Vargas says he’s stronger than ever since moving up to junior middleweight for his fight tonight, and his goal is to knockout his opponent Humberto Soto (69-9-2, 37 KOs) when he sees an opening in their bout on DAZN at The Forum in Inglewood, California.

Vargas, 5’11”, will have a big size and youth advantage over the 5’7 1/2″ Soto, who is competing in his second consecutive match against one of Matchroom Boxing USA promoter Eddie Hearn’s restoration projects.

Hearn signed former world champions Brandon “Bam Bam” Rios and former two-division world champion Vargas (28-2-2, 10 KOs) with the hope of restoring them back to vitality to put them in world title fights at 147 and/or 154. Hearn’s plan was to match Rios against the aging 38-year-old former two division world champion Soto, and have him look good in beating him, and then setup a title fight against one of the welterweight champions. Unfortunately for Hearn, Soto flipped the scrip and gave the limited, past his best “Bam Bam” Rios a boxing lesson in defeating him by a 12 round unanimous decision on February 23 in Tijuana, Mexico.

Having failed with Rios, Hearn is now looking to do the same thing by matching the even bigger Vargas against Soto with the same goal in mind. In this case, it looks strange for Vargas, who wants to fight for a world title against WBO junior middleweight champion Jaime Munguia later this year, to be matched against a fighter that spent most of his career at super featherweight. Soto now fights at welterweight, but he’s clearly not built for that weight class. He’s a super featherweight that is carrying around extra weight that he’s not designed to carry.

“I’m really looking to show my fans a showcase, and a great technical fight,” Vargas said to Fighthub about his bout tonight against Humberto Soto on DAZN. “I’m looking to conquer the [154 lb] division, and become a world champion, but first it starts with Humberto Soto. The fight will be at a catch-weight of 154, but I’ll fight at 154. I feel better at 154 than I did at 147. I have more energy,” Vargas continued.

Jessie says he wants to “conquer the 154 lb division, and yet he’s facing what for all intents and purposes is a super featherweight tonight in Humbrto Soto. There’s something seriously wrong with this picture. Vargas doesn’t realize how strange that is. If you want to be a champion in a particular weight class, then are you fighting someone that is four divisions below that weight class? Soto is still super featherweight in terms of his frame and punching power. He’s basically moving up four divisions tonight to face Vargas at junior middleweight. It’s kind of sad, really. To see how Vargas’ career has gotten to the point where he’s being matched against someone so much smaller, older and lighter than him in 38-year-old Soto. All this is done so Vargas can finally get a win in a showcase fight. It’s disappointing. 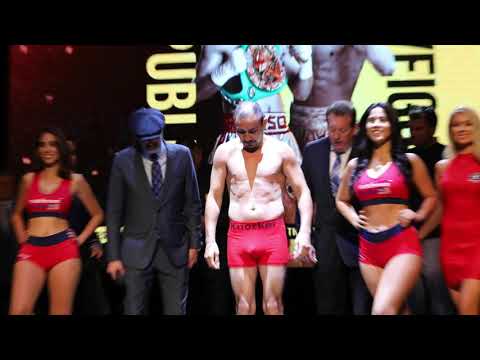 The casual boxing fans might not realize this, but Vargas hasn’t won a fight since 2017. That’s 2 years ago. Vargas’ last win was against journeyman Aaron Herrera on December 15, 2017. Vargas beat Herrera by a 10 round unanimous decision. Vargas had been out of the ring for a year before that since losing to Manny Pacquiao by a 12 round unanimous decision in 2016. After beating journeyman Herrera in 2017, Vargas came back in 2018 and fought consecutive 12 round draws against Adrien Broner and Thomas Dulorme. With Vargas having failed to prove that he can beat fringe contenders at 147, he’s now moving up to junior middleweight to target WBO 154 lb champion Munguia if he can get past Soto tonight. If Vargas gets his wish, he’ll be marching into the Munguia fight with a recent ring record of 1-0-2 in his last three fights.

Vargas doesn’t seem to care that he’s fighting a guy much smaller and older than him in Soto. Vargas thinks this is a great fight for him to use as a springboard for getting a world title shot against WBO 154 lb champion Munguia, even though Soto ISN’T a junior middleweight. Hearn didn’t say why he’s choosing to match Vargas against a welterweight instead of someone from the 154 lb weight class. If Hearn is serious about wanting to match Vargas against Munguia in 2019, he should be putting him in with guys from the junior middleweight division instead of using Soto as the opponents for his fighters.

“I’ll make sure to become a world champion in this division. I’m hoping we can make the fight him and I,” Vargas said about his desire to face WBO junior middleweight champion Jaime Munguia later this year. “I have Freddie Roach in my corner. He’s elevated by career by far. I feel extremely strong, stronger than I’ve ever been before. For that reason, I can see me winning by knockout. That’s the plan. When there’s an opening, I plan on taking him down with a big shot. As good as I feel, he’s going down. I have the power, that’s or sure. My next fight is at 154. I’m not looking past Humberto Soto. 147 was tough for me. I can feel much more of a difference now with my energy. I feel more energetic, more powerful, more explosive. I’ve never had a training camp as strong as I am now,” Vargas said.

Vargas has talked about his punching power and energy having increased in the past, but that’s failed to show itself. He’s never been able to develop his power. He’s now blaming that on him having had to struggle to make 147. We’ll see if that’s the case. If Vargas comes out tonight looking like another Julian Jackson, then you can say that his lack of power all these years is because he was fighting in the wrong weight class. It’s hard to believe that though. It’s more likely going to be the case that Vargas’ lack of of power will be magnified now that he’s moved up to 154. We may not see it tonight, because Vargas is fighting a super featherweight in Humberto Soto. But when Vargas begins fighting junior middleweights, then his lack of power will be exposed.

It’s still unclear whether Vargas’ promoter Eddie Hearn of Matchroom Boxing USA will be able to setup a fight between him and Munguia. He may miss out on his chance if Munguia moves up to middleweight without waiting for him. Munguia has unfinished business with Dennis Hogan, who he beat by a controversial decision recently this month on April 13. Munguia’s management plan on giving the 34-year-old Hogan a rematch. That fight use up the remainder of 2019 for Munguia. Since he plans on moving up to middleweight in 2020, it’s likely that he won’t bother sticking around long enough to fight Vargas.

“The audience we’re going to have in this fight is going to be tremendous,” Vargas said about his fight with Soto, which will be seen both in Mexico and the United States. “I’ve always wanted to be popular in Mexico as well, because I’m a Mexican American. I want to entertain my people in Mexico and Latin America. Munguia is very popular. He has the WBO belt. I want to become a three division champion. That’s the reason I want to challenge him. It’s still possible to make that fight happen later this year,” Vargas said about a fight between him and Munguia.

The fans from Mexico are going to be tuning in tonight in order to see Soto, who they love. He’s got a huge fan base from his home boxing fans in Mexico, because he’s known for putting on exciting fights. Vargas has very little with his career in comparison to Soto, even though he’s technically a two division world champion. Vargas won his two division titles by beating flawed fighters Khabib Allakhverdiev and Sadam Ali. Vargas’ 12 round unanimous decision win over Khabib was controversial in 2014.

Vargas doesn’t have anywhere near the same amount of talent Soto possesses. There’ no comparison of the two. Soto is an amazing fighter. You can’t teach the kind of talent Soto has going for him. You have to be born with it. With that said, Vargas is so much bigger, so much stronger and so much younger than Soto. Vargas will win based on those facts, but not because he’s a better fighter than Soto. If Vargas was the same age at 38, and being asked to move up three weight classes to take on a much younger fighter at super middleweight or light heavyweight, he would be completely dominated. That’s what Soto is being asked to do tonight. He’s a facing a bigger, stronger and younger fighter than him in weight class he’s NEVER fought at in the junior middleweight division. Vargas will win by a 12 round decision, but it won’t mean anything. For it to mean something, Vargas would need to be matched against a junior middleweight like Erislandy Lara, since that’s the division he plans on fighting at. You don’t fight super featherweights if you want to become a world champion at 154. Tonight’s fight between Vargas and Soto is pointless. They might as well call it an exhibition match.