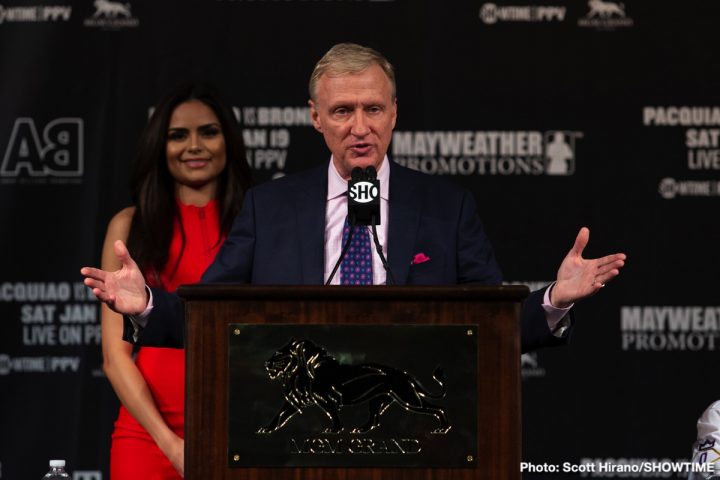 Lennon’s golden voice has thrilled millions of fight fans over the last 30 years, with his famous catchphrase “It’s Showtime!” elevating the excitement to fever pitch at sell-out arenas in more than 32 countries across the globe and at over 1,000 world title fights.

Lennon said, “I’m thrilled to be joining PBC and Poxon Sports for this big event on February 23rd. The fight card line-up looks fantastic and rich with competitive fights. And the main event certainly has the potential to be an epic event. On that upcoming night at The O2, I simply can’t wait to see DeGale and Eubank Jr. make their walk to the ring, introduce them before their respective fans and then sit down to watch the action unfold along with the thousands of vocal, chanting and singing Brits. It’s going to be magical and there is no place in the world I would rather be!”

The blockbuster fight between bitter rivals DeGale and Eubank Jr. kicks-off 2019 in sensational style and Lennon cannot wait to be at the very centre of another defining fight on these shores.

Jimmy said, “Announcing fights in the UK holds a special place in my heart for a number of reasons. The fans are the best in the world creating an unparalleled atmosphere that I wish boxing aficionados across the globe could experience even once in their lives.”

A 2013 inductee into the International Boxing Hall of Fame, Jimmy has been at the microphone for hundreds of iconic bouts, including Mike Tyson vs. Evander Holyfield, Winky Wright vs. Félix Trinidad, Floyd Mayweather Jr. vs. Manny Pacquiao and most recently Deontay Wilder vs. Tyson Fury.

He has been in the vortex of so many illustrious clashes in the UK, and some of the most famous were in the talent packed 168lb division, involving legendary names like Joe Calzaghe, Steve Collins, Chris Eubank, Nigel Benn, Richie Woodall, Robin Reid and Carl Froch.

Lennon recalled, “I have had the opportunity to be a part of a number of historic battles in the UK. And some of the most memorable events have been, coincidentally, in the 168-pound division like the DeGale vs Eubank showdown. Certainly, I have many fond memories of being a part of great events in the UK like the Tyson fights, the Naseem Hamed performances and many others but it is uncanny how the British Super Middleweights have risen to the top throughout the years. I have had the chance to announce Joe Calzaghe, Steve Collins, Nigel Benn, Richie Woodall, Robin Reid and Carl Froch among many others. More recently, I have announced current British greats like Callum Smith, Chris Eubank, Jr., James DeGale and the recently retired George Groves.”

Jimmy’s UK announcing debut was on one of the most defining nights in the rich heritage of British boxing, the near mythical confrontation between Chris Eubank Jr’s father and Nigel Benn on October 9, 1992 at Manchester United’s Old Trafford, which took place in front of 42,000 fans who crammed into the stadium and the millions who watched on ITV.

Jimmy reminisced about that famous night, which is etched into the memories of so many fight fans, “My very first event in the UK was for Benn v Eubank 2. I’ll never forget the great action, the boisterous crowd and the chilly circumstances at Old Trafford Stadium in Manchester…the coldest I have ever been at a boxing event!”

He was in the ring to announce many of Super Middleweight great Joe Calzaghe’s fights, arguably Britain’s finest ever boxer, including his 2006 demolition of IBF champion Jeff “Left Hook” Lacy, an American who had been compared to Mike Tyson and was considered one of the hottest prospects in World boxing at the time.

He remembers Calzaghe’s fights with affection, “I also remember fondly the many Joe Calzaghe fights I announced and the mastery with which he dismantled his opponents. I recall how so many of my America colleagues predicted that Jeff Lacy would destroy Joe and ignored my disagreement with them. I had been in the centre of the ring for numerous Calzaghe fights and was well aware of his exceptional skills. History records that I was right and Joe was brilliant that night.”