By Dan Ambrose: Trainer Robert Garcia says Mikey Garcia (39-0, 30 KOs) is absolutely certain that he’s going to send unbeaten IBF welterweight champion Errol ‘The Truth’ Spence Jr. (24-0, 21 KOs) skittering down to his first career defeat when they face each other in a 1 1/2 months from now on FOX pay-per-view on March 16 at the AT&T Stadium in Arlington, Texas.

Robert doesn’t see it as an easy fight for his brother Mikey, but he’s seen enough from his sparring against bigger fighters that are roughly the same size as the 5’9 1/2″ Spence to make him believe in his mind that he’s going to win the fight. Even if he didn’t really believe in him, Robert likely wouldn’t come out and admit that Mikey doesn’t have a chance in a million to beat Spence. If Robert did that, whatever self-doubts that Mikey has in the back of his mind would probably cause him to fall apart mentally even before he enters the ring on March 16.

“He’s so confident that he’s going to beat Spence,” Robert Garcia said to Fighthub about Mikey being on cloud nine with his self confidence. “I don’t want him to feel too confident or think it’s going to be an easy fight, because it definitely won’t.”

Unfortunately, there’s only so much self confidence can do for a fighter. If you lack the size, chin, power and talent to get the job done, you can be the most confident fighter in the world and you’re doing to get knocked around the ring like a rag doll. Mikey looked terrible against former International Boxing Federation 140 lb champion Sergey Lippinets last year in March. Mikey won the fight over the former paper champion Lipinets, but he took terrible punishment to the head, and looked like he’d been run over by a truck afterwards. Lipinets would likely be wiped out in three rounds by Spence, and yet he was able to drag Mikey the full 12 rounds and beat him up worse than Josesito Lopez did to Keith ‘One Time’ Thurman last weekend.

Mikey will need to come up with a game plan that will prevent him from being snowed under by Spence’s body shots in the first three rounds, but it’s very likely that’s what’s going to happen. Mikey might not make it past the 1st round if Spence starts putting hands on him like he did the younger 23-year-old Ocampo, who stands 5’10 1/2″, and can punch. Ocampo might be an even better puncher than Mikey, and he couldn’t keep Spence off of him, and he folded right away in losing by a 1st round knockout. Mikey takes a pretty good head shot, but it’s a different story when it comes to getting hit to the body.

Robert bringing up the subject of Mikey’s past fights is meaningless when it comes to a guy like Spence. For one, Mikey hasn’t fought all that many good fighters during his career. The best guy that Mikey has fought is Orlando Salido, and that fight ended with Robert pulling him out after the eighth round after he suffered a broken nose. The fight had changed hands at the time that Robert told the referee he didn’t want his brother to continue fighting because of his broken nose. At the time that the fight was stopped, Salido was working a very tired looking Mikey over with body shots, and it was clear that the last four rounds were going to be very difficult for him to get through without some kind of miracle. Given the way that Robert pulled Mikey out of that fight after eight rounds, you can’t even call that a win. That’s more of a no contest type of affair. Mikey didn’t beat Salido. He got an eight round technical decision. Mikey’s best wins of his career, that aren’t tainted, were over these fighters:

– Juan Manuel Lopez – * This fight came after Lopez was no longer the fighter he’d once been.

Those are not good enough fighters for Robert to be mentioning them as reason for Mikey to beat Spence. If Spence had fought all those guys, he would have likely not only beat them all, but knocked them out in the early rounds. It’s not just a size thing. It’s a talent situation. Mikey’s wins have been against mediocre fighters or guys that were over the hill when they fought him like Juan Manuel Lopez. That guy was a good fighter earlier in his career, but he was completely shot by the time he fought Mikey.

What Mikey needs to beat Spence isn’t self conference. He needs to ‘game the system’ somehow by holding, pushing off or running for the full 12 rounds. Mikey has to do something to keep the bigger and much more powerful Spence off of him. If Mikey tries to fight Spence, he’s going to get wiped out. It doesn’t matter how much size Mikey puts on. He’s going still going to be short, and helpless on the inside. Mikey can punch to the head with power in the lighter weight classes, but his power looked weak at 140 against Broner and Lipinets, and it’s going to be less at 147 against Spence, who is really a true junior middleweight. Spence spars with the Charlo brothers, who are both middleweights. Jermell Charlo still fights at 154, but he’s a true middleweight in size. Mikey has never been a body puncher, and he’s a poor inside fighter.

Against Salido, Mikey was shoving him and using his forearms to pull down on his head when he would try and fight on the inside. Since the referee was missing in action that night, Mikey was able to bend the rules against Salido to prevent him from fighting on the inside. Against Spence, those tricks aren’t going to work. Spence is too tall to be shoved away, and he’s not going to have his head forced down by Mikey when he looks to throw body shots. The only thing that Mikey can do is to keep Spence off of him is to run or hold. If Mikey fights Spence, which he should at least try to do, he probably won’t last more than a round or two.

What some boxing fans believe what Mikey’s game plan for the Spence fight is to try and build up a small lead in the early rounds, and then bow out with an injury once the fight reaches to sixth round so that he can try and win a technical decision like he did in his fight with Salido. That would turn the fight from a 12 round match to a 6 rounder. If Spence doesn’t realize that the fight is going be a full 12 round match, he might not fight as hard in the early rounds, and that could give Mikey his chance to build up a small enough lead to win the fight by a technical decision like he did against Salido. 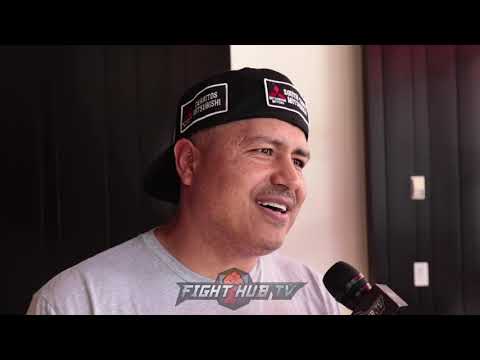 
« Brandon Rios vs. Humberto Soto on Feb.23 on DAZN

Whyte could face Breazeale, Ortiz or Povetkin next »