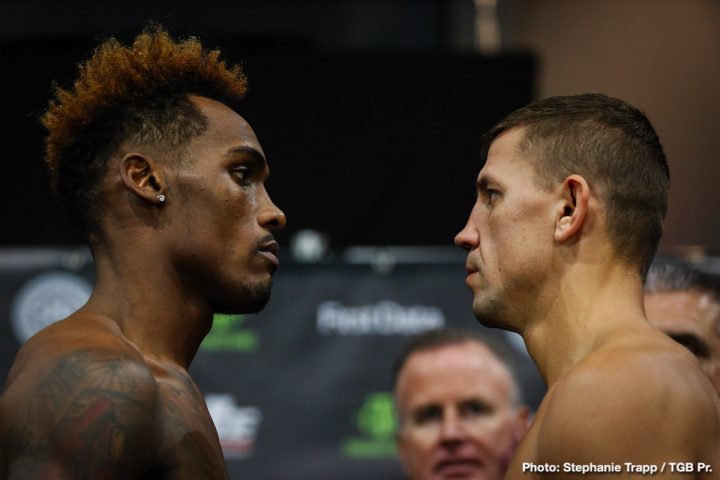 By Jim Dower: Jermell Charlo (27-0, 21 KOs) weighed in at 159.6 pounds for his title defense of his interim WBC middleweight title on Friday against replacement opponent Matt Korobov (28-1, 14 KO) for their fight on Premier Boxing Champions on FOX this Saturday night at the Barclays Center in Brooklyn, New York.

Korobov, 35, weighed in at 159.25 lbs. Korobov looked good for a fighter that was previously scheduled to fight at a catchweight at super middleweight against journeyman Juan de Angel on the Charlo undercard. Korobov was brought in as a replacement for former two time middleweight world title challenger Willie Monroe Jr. after he failed a VADA drug test.

This could be an interesting fight if Korobov has anything left in the tank. When Korobov was at his best, he’s someone that would give anyone problems in boxing. However, Korobov has been fighting rarely in the last four years, and he’s getting older. If Korobov is depleted from age, inactivity and the effects of dropping weight from light heavyweight to 160, then could be an easy fight for Charlo. Jermall has got the youth on his side.

Jermall needs to win on Saturday to stay in the hunt for a title shot against WBC middleweight champion Saul Canelo Alvarez (51-1-2, 34 KOs). It doesn’t matter if Charlo looks good in beating Korobov. In fact, it might hurt Charlo if he looks too good in defeating Korobov, as that could lead to Canelo and his promoters at Golden Boy choosing to go in another direction rather than fighting him and having to deal with a fighter that might be too good.

Charlo is starting to sound frustrated at not getting his mandatory title defense, considering that he’s been waiting for a year and a half for the WBC to order the fight, and they’re looking like they’re going to do that anytime soon. The WBC president Mauricio Sulaiman says his company is going to be ordering Charlo to face Gennady Golovkin in a final eliminator after this Saturday. In other words, Charlo will need to win another eliminator for him to get the title shot that he already earned for a crack at the WBC middleweight belt.

In the co-feature bout, WBC junior middleweight champion Jermell Charlo (31-0, 15 KOs) weighed in at 153.5 lbs for his defense against Tony Harrison (27-2, 21 KOs), who weighed in at 153.25 lbs. Charlo has taken some criticism from the boxing public for facing a guy with two fairly recent 9th round knockout losses to Jarrett Hurd and Willie Nelson.

In the third fight on the main card, 2012 U.S super heavyweight Olympian Dominic Breazeale (19-1, 17 KOs) weighed in at 256.5 pounds for his 10 round fight against 2008 Olympian Carlos Negron (20-1, 16 KOs) in their 10 round fight. Breazeale, 33, needs a victory over Negron to keep his World Boxing Council mandatory status for a title shot against WBC heavyweight champion Deontay Wilder. It was thought that the WBC would eventually order the Wilder vs. Breazeale fight as soon as Deontay gets though with his two fights with Tyson Fury and possibly his unification match against IBF/WBA/WBO heavyweight champion Anthony Joshua, but that’s now possible that the WBC may order Breazeale to face Dillian Whyte in a final eliminator. If they do that, then Breazeale will need to jump through one more hoop before he gets his title shot against Wilder, Fury or Joshua. However, Whyte likely won’t agree to fight Breazeale, since he’s already in position to fight Joshua in April. 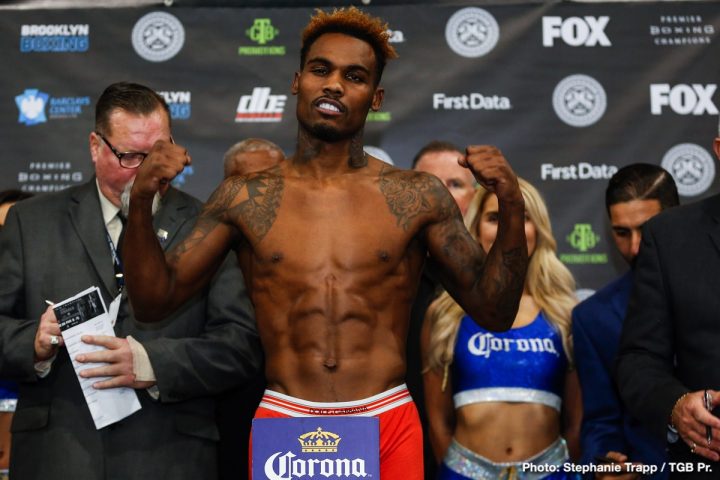 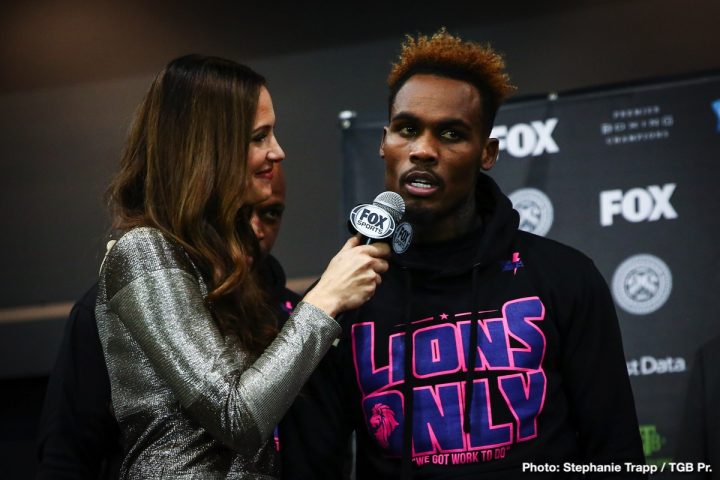 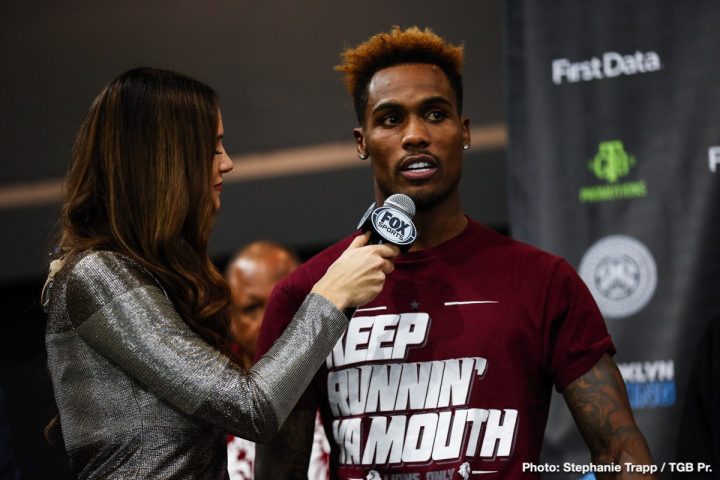 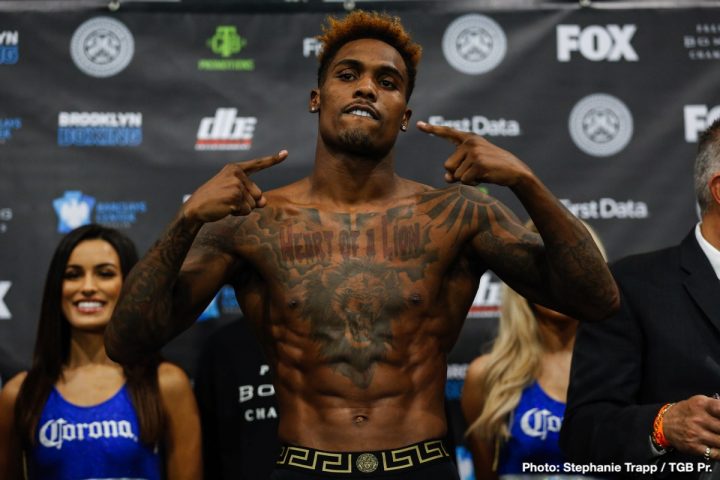 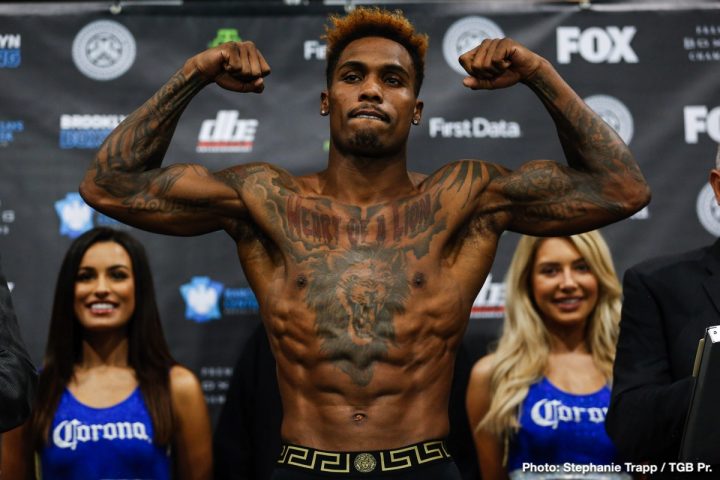 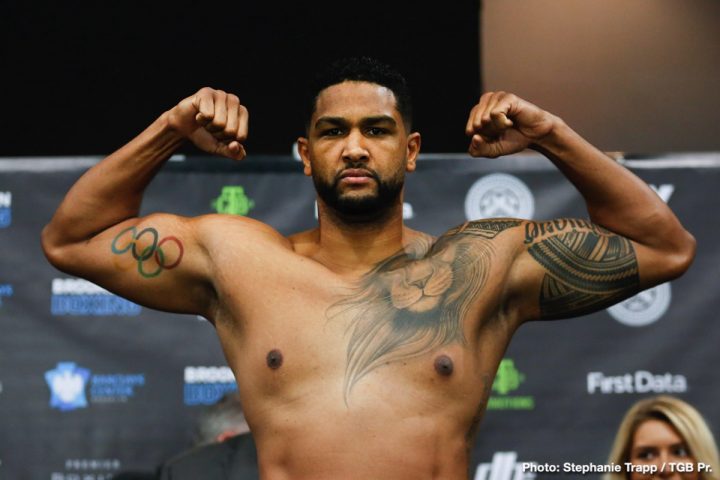 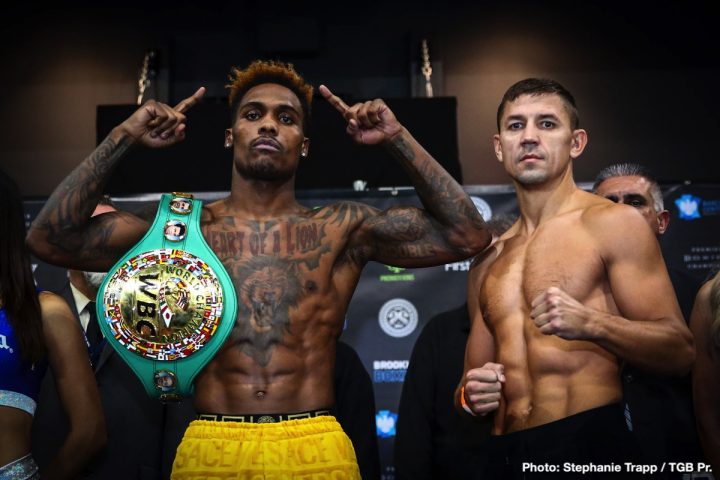 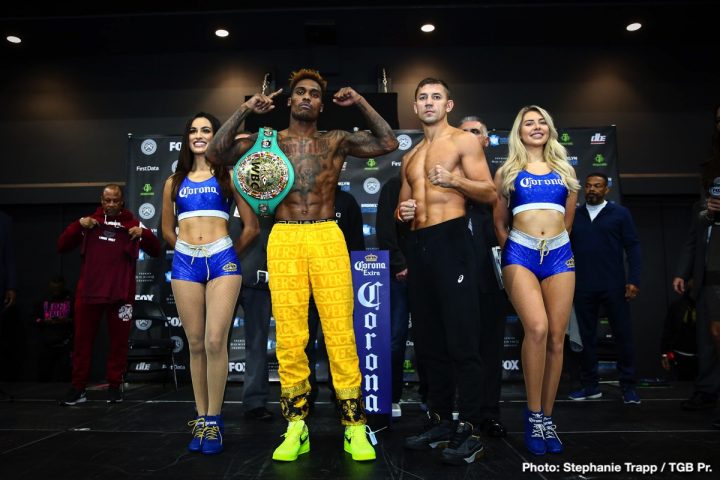 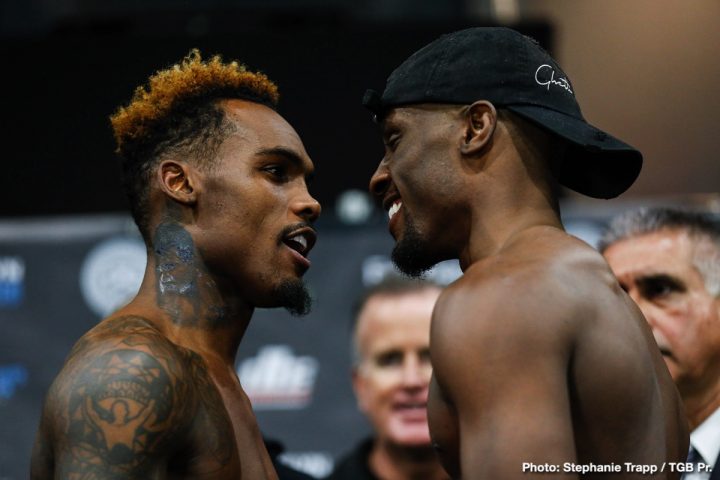 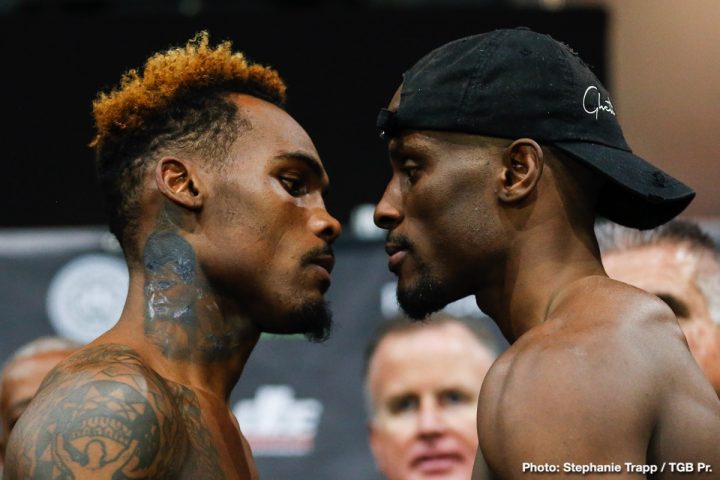 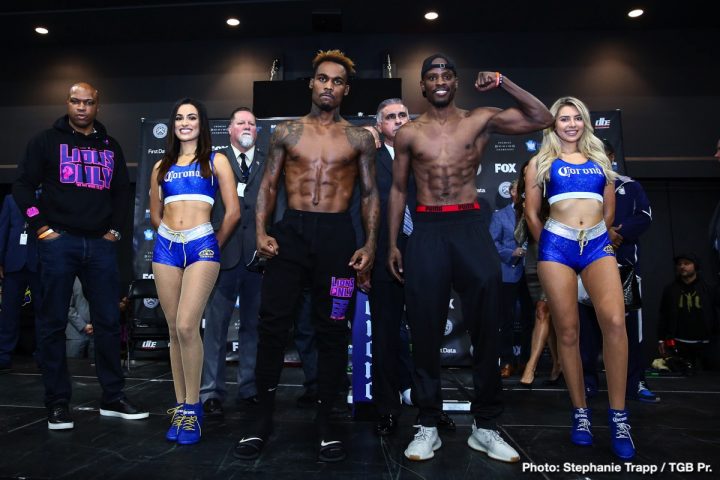 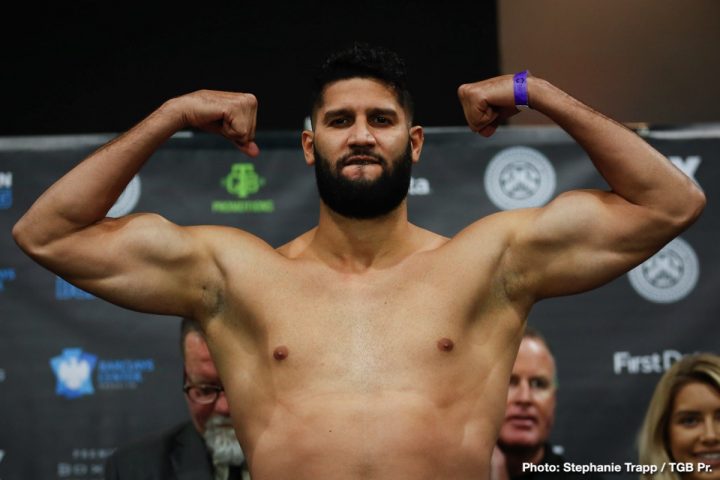 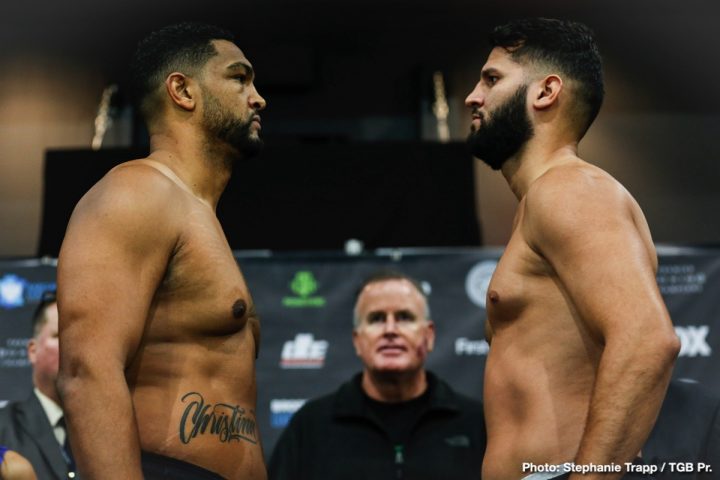 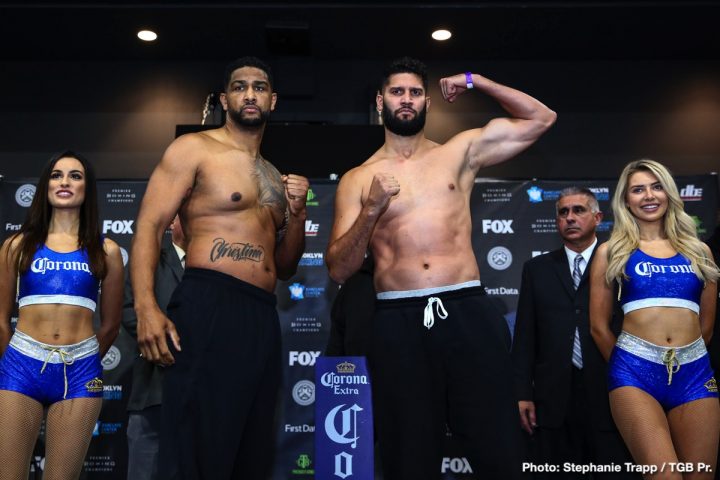 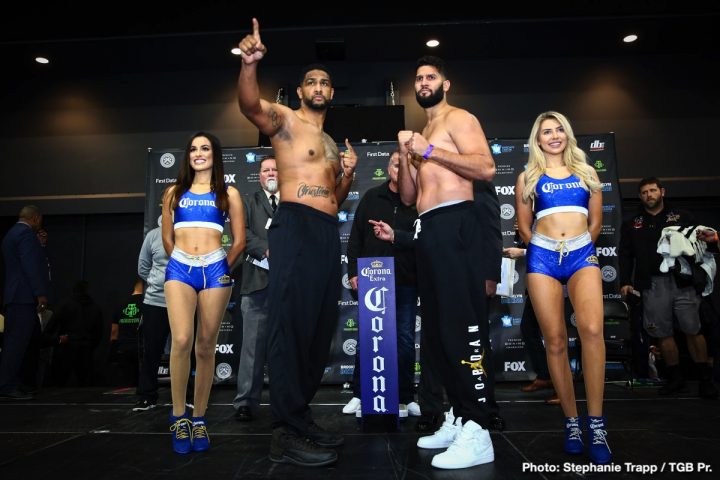