Jarrett Hurd excited about fighting on PPV this Saturday 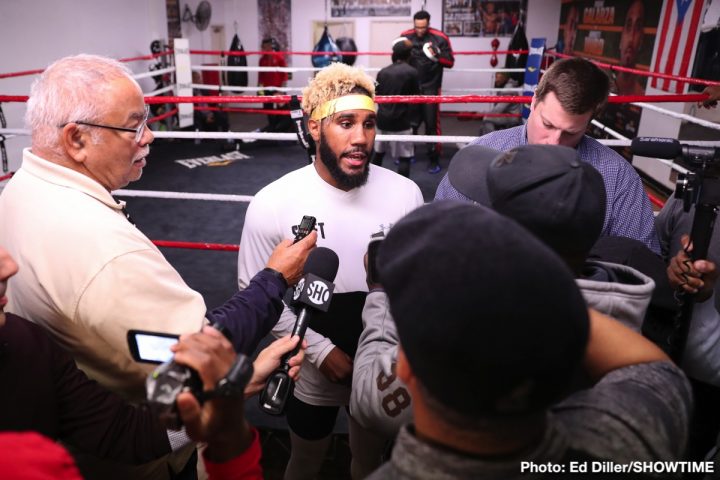 By Mike Smith: After toiling away in near obscuring for the last year years, Jarrett Hurd (22-0, 15 KOs) is now suddenly getting a lot of attention with his career following his 12 round split decision win over former World Boxing Association Super World junior middleweight champion Erislandy Lara earlier this year on April 7.

Hurd, 28, will be fighting in the co-feature bout on Saturday night on the Deontay Wilder vs. Tyson Fury card on Showtime PPV at Staples Center in Los Angeles, California. The card starts at 9:00 p.m. ET/6:00 p.m. PT. Hurd will be defending his IBF/WBA 154 lb titles against Jason Welborn (24-6, 7 KOs). That fight is not expected to be competitive in the least, but it’s considered to be a better fight than some of the other undercard fights involving talented fighters like heavyweights Joe Joyce, Luis ‘King Kong’ Ortiz and Chris Arreola. Those three heavyweights will be competing in separate bouts on the card against opposition not in their class in terms of talent.

Hurd needs to make sure he doesn’t take his foot off the accelerator for his fight this Saturday night against Welborn, as there will be a lot of people watching him expecting a great performance from the Maryland native. Even this is a stay busy fight designed as a showcase, it’s imperative that Hurd builds on the performance he put in against 35-year-old Erislandy Lara last April. That was by no means an easy slam dunk win for Hurd over the Cuban Lara. Hurd needed a knockdown i the 12th round to squeak by with a close decision by the scores 114-113, 114-113 for Jarrett and 114-113 for Lara. Little did boxing fans know at the time, Hurd fought the Lara contest with a torn rotator cuff. Hurd has since had surgery to repair the problem; hence, that’s the main reason why he’s defending his IBF/WBA junior middleweight titles against non-contender Welborn instead of a top level guy that the fans want to see him fight.

The World Boxing Association wanted Hurd to fight a rematch with Lara, but he chose instead to move forward in another direction with his career. Thus far, the WBA hasn’t stripped Hurd of his title with their organization for not setting up a rematch with Lara. They’re aware that Hurd wants to unify the 154 lb division by facing Charlo in 2019, and then the Golden Boy co-promoted WBO junior middleweight champion Jaime Munguia. Getting a unification fight against Jermell won’t be hard for Hurd to do, but Munguia could prove to be an impossible fight to setup due to his promoters at Golden Boy and Zanfer Promotions likely not pulling the trigger on a tough unification fight between the two fighters. Munguia, 22, is still young, and it would be a major step up in class for him to face Hurd at this early point in his career. Despite being an incredible talent, Munguia is probably not ready for a fighter like Hurd,

A rematch between Hurd and Lara would be nice so that the boxing public could see for themselves whether the win was a fluke thing or not last time around. That’s not the fight that Hurd wants, however. He’s targeting World Boxing Council champion Jermell Charlo, and there’s a good possibility that fight will take place in 2019.

“The win over a long-reigning champion like Erislandy Lara solidified in everyone else’s mind what I already knew,” Hurd said to ESPN.com. “Now I’m getting the respect I deserve. After that fight, I got the respect that I deserved from everyone because they seen that I may not be the fastest guy, I may not have the prettiest style, but one thing’s for sure — he’s in shape and he’s coming to win.”

Hurd has a way of making all of his fights exciting with the way he walks his opponents down, takes their best shots so that he can land his own hard blows. Hurd’s fights against Lara, Austin Trout and Tony Harrison were all wars of attrition. Hurd is better designed to win those types of fights, and he has the size, power and more importantly the engine to wear his opponents down slowly.

Hurd is excited at being able to fight on pay-per-view for the first time in his six year pro career. He doesn’t mind being in the co-feature. Just being able to fight on a PPV card is a real compliment to him, and it shows that he’s finally being recognized as one of the best fighters in boxing. Hurd is already seen by many fans as the #1 fighter in the 154 lb division. If things to right with Hurd’s management in 2019, he should be able to prove to the boxing fans that he’s the best fighter in the junior middleweight division by fighting Jermell Charlo (31-0, 15 KOs).

Charlo, 28, has a fight that he needs to win next month against former Hurd foe Tony Harrison on December 22 at the Barclays Center in Brooklyn, New York. That by no means will be an easy fight for Jermell. Harrison is a big guy at 5’11,” and he hits hard with both hands. The only thing that has held Harrison back from winning a world title is his stamina. Harrison is more of an eight round fighter than a guy capable of fighting a full 12 rounds at top speed.

Harrison gasses out at the eight round point, and that enables his opponents to wear him down to score stoppages. However, he’s only been beaten twice in his seven-year pro career, and that was against the hard-hitting Willie Nelson and Hurd. In most of Harrison’s fights, he knocks out his opponents within the first 5 rounds. For that reason, you can’t rule out an upset win by Harrison against Charlo on December 22. Harrison is a live dog in that fight. But if everything works out, Jermell will be the winner and then the adviser for Charlo and Hurd, Al Haymon, can start working on putting together a unification fight between them in 2019.

The thing to watch with Hurd’s performance against Welborn this is how well his left shoulder responds following his surgery to repair his left rotator cuff. An injury like that sometimes take a long time to come back from. Some fighters are never able to regain the power that they once had in their shoulders after rotator cuff surgery. Since this is the first fight for Hurd since his shoulder surgery seven months ago, it’s going to be interesting to see how well he’s able to punch with his left arm. Hurd says his left shoulder is back to full power, but the boxing public will need to judge for themselves if that’s indeed the case.

Hurd suffered the shoulder injury before he fought Lara. He hurt his shoulder during camp, and he continued to push on and take the fight rather than cancel it. It was fortunate for Hurd that Lara stood and slugged with him for 12 rounds instead of getting on his bike, which is what he expected him to do. In many of Lara’s past fights against the likes of Saul Canelo Alvarez and Austin Trout, he had mostly boxed them, and given them fits with his jab and constant movement. But against Hurd, Lara went old school in standing and trying to outwork him with volume punching. It almost worked for Lara if not for him getting dropped in the 12th round by Hurd, who had upped the pressure that he was putting on him in that round. Lara couldn’t keep up with Hurd.