Tyson Fury: “Deontay Wilder wanted me to hit him” 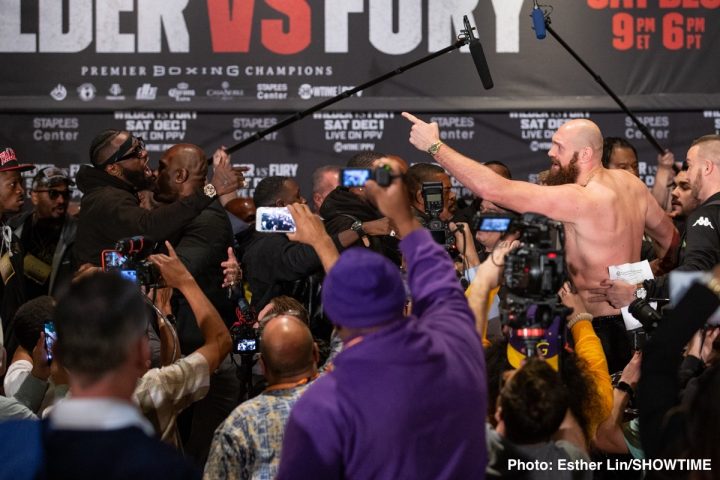 By Scott Gilfoid: Tyson Fury thinks Deontay Wilder intentionally started the scuffle at the final news conference on Wednesday to try and get him to hit him so that he could get out of their fight on Saturday on Showtime PPV presented by Premier Boxing Champions.

It sounds to some boxing fans like paranoia has kicked in 100% with Fury. He seems to be seeing things in Wilder that aren’t there, and coming unglued at the last minute. When this fight was put together, there were fans that wondered if Fury would make it to the fight without needing to be put in a straight jacket and carted away. Hopefully, Fury can keep a grip on it mentally and not come apart at the seams before steps foot inside the ring with the one-punch knockout artist Wilder on Saturday night. The fans are looking forward to this fight, and they would be greatly disappointed if Fury bails at the last minute.

WBC heavyweight champion Wilder (40-0, 39 KOs) and lineal champion Fury (27-0, 19 KOs) will battle this Saturday, December 1 in a fight between unbeaten giant warriors on Showtime pay-per-view at the Staples Center in Los Angeles, California. This will Wilder’s first shot at pay-per-view, and he’s hoping to dispatch the 6’9″ Fury in impressive fashion, and move on to bigger and better things against IBF/WBA/WBO champion Anthony Joshua in 2019.

Unfortunately for Wilder, it’s not up to him whether he can get the fight against Joshua. It’s the British fighter and his promoter Eddie Hearn that will decide if they want to fight him or not. If they don’t, then it’s expected that they’ll stick to their flat fee offers they’ve been danging in front of Wilder and his management instead of offering him a percentage deal.

“Deontay Wilder needed to do something so he started getting in my face,” Fury said to skysports.com. “I believe he wanted me to hit today so he could get out of the fight, or get me a massive fine. But I was not going to do that.

It sounds ludicrous that Wilder would want to get out of a fight with Fury, when it’s a match that will make him a lot of money, and lead to bigger things in the future against Joshua. Wilder is the favorite to win. Although a lot of ex-boxers are predicting a victory for Fury if the fight goes the full 12 round distance, the chances are high that the ring rusty Fury won’t see the final bell. Getting through the first six rounds will hard enough for Fury. To go 12 rounds against Wilder, it’s going to take a perfect game plan and execution on Fury’s part to make it that far.

It looked to some like Wilder and Fury were about to throw punches at the final press conference on Wednesday. Fury made sure that Wilder couldn’t get to him by backing away from him when things got heated during the face off. Tensions wouldn’t have escalated the way they did if Fury hadn’t bobbed his head from the left to the right of Wilder when the two of them were standing during the face off. When a fighter is feigning that he’s fighting his opponent during a face off, it’s not a good thing. The fighter instinct in Wilder kicked in when Fury started pretending that he was fighting him, and it looked like he wanted to swat him with one of his bazooka right hands to get him to standstill and look him in the eye. The heat of the face off clearly got to Fury, who couldn’t meet Wilder’s iron gaze for the brief face off. For fighters that are intimidated during face offs, it’s better that they wear sunglasses so that their opponents can’t look in their eyes and see fear. Fury might have been better if he’d worn sunglasses so that he could look away from Wilder’s eyes during the face off on Wednesday. Wilder was clearly the boss during the head to head meeting, as Fury looked submissive and weak in comparison.

“Wilder ain’t on Wladimir Klitschko’s level,” Fury said via Michael Benson. “I heard off a good source that when Klitschko and Wilder sparred, Klitschko dropped him twice. He got out the ring, couldn’t continue. Klitschko couldn’t even land a glove on me, never mind drop me.”

In the Klitschko vs. Fury fight in 2015, Tyson was spoiling for 12 rounds, and doing a lot of fouling. You can argue strongly that Wladimir would have won the fight if the referee Tony Weeks had done a better job of policing all the rabbit punches and holding that Fury did in the fight. Getting hit in the back of the head countless times had to have been tough on Wladimir. The referee looked like he wasn’t up to the task of controlling the fouling in that fight. It would have been interesting if Wladimir had been throwing rabbit punches all night long like Fury. It might have been a different outcome. To have a world level fight descend into a rabbit punching contest would have been a black eye for boxing. It was bad enough that Fury got away with so many clear fouls to the back of Wladimir’s head without having multiple points deducted.

Fury’s comments about the sparring that Wilder did with Wladimir Klitschko in 2014 haven’t been verified, so you have to take them with a grain of salt. But even if it were true, it was just sparring, and it was early on in Wilder’s career before he got to world level, and matured to where he is now. The way that Wladimir looked in his last fight against Joshua, Wilder would have a great chance of knocking the Ukrainian fighter out if he was inside the ring with him that night.

The 6’7″ Wilder says he’s looking forward to seeing if Fury can backup all the tough talk that he’s been doing in the lead up to the fight. Fury has clearly angered the sleeping giant to the point where he wants to knock him out on Saturday night. In the first press conference, Wilder looked peaceful and on friendly terms with Fury. If you contrast that with how Wilder looked yesterday at the final news conference with Fury, it was like seeing two different people. The boxing fans on social media saw the difference in Wilder, and they know that he’s officially annoyed at the 30-year-old Fury for all the lip that he’s been giving him for weeks. Wilder is no longer bothering with the niceties. He wants to come out full bore on Saturday night and get rid of Fury as fast as he can.

Some boxing fans see this fight as a step down from Wilder from his previous match against the previously unbeaten Cuban talent Luis ‘King Kong’ Ortiz. Wilder had to overcome a rough 7th round to stop Ortiz in the 10th round on March 3. The way that Ortiz has been fighting is clearly well above what we’ve seen from Fury in his last three fights against Sefer Seferi, Francesco Pianeta and Klitschko. Fury was boring in those fights, and doing a lot of slapping and spoiling. Those performances by Fury aren’t up to the same level that we’ve seen from the 39-year-old Ortiz.


« Jarrett Hurd excited about fighting on PPV this Saturday