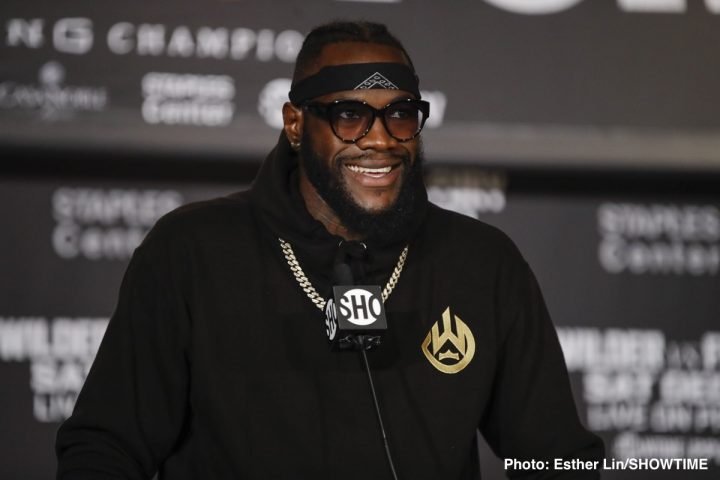 The Bronze Bomber says AJ and his team are preventing his dream of unifying the heavyweight division.

Speaking to William Hill and Oddschecker ahead of his fight with Tyson Fury on Saturday, Deontay Wilder spoke about the ongoing “will he, won’t he?” with Anthony Joshua.

Wilder is clear about his desire to face the Brit, insisting that holding all of the available titles in the heavyweight division remains his ultimate aim. He said, “My goal is what I’ve always set out to do – it’s to unify.”

Reports earlier this year suggested that Wilder, the WBC champion, was in talks about a multi-million-pound unification bout with the current holder of three of the four major titles, but there have since been rumours that AJ and manager Eddie Hearn was not forthcoming.

Joshua was instead forced by the WBA to face mandatory challenger Alexander Povetkin in September, defeating the Russian by knockout in the seventh round of the bout at Wembley.

When asked whether Joshua and his team were “buying time” before facing him, the Bronze Bomber replied, “Of course they’ve been doing that”. He is adamant that the ball is in Joshua’s court, saying, “We all know they don’t want this fight or it would’ve happened”.

Wilder contrasted the futile talks with AJ’s entourage with the direct and positive discussions he enjoyed with Tyson Fury himself. He praised Fury, saying “This fight didn’t happen because we got together with our managers and promoters, this fight happened because of me and him having a discussion”.

Can you tell us what you’ll do to Tyson Fury when the first bell goes?

“My whole mentality is going to be adjusting, trying to figure him out. I’ve never faced a guy of his style.

I think the first part, maybe even the second round, will be all about adjusting. Who can adjust to whose style the fastest and then after that you’ll see things starting to work out, starting to add up.

And whoever can solve the problem the fastest will be the one to add up and I know that’s gonna be me. I’m going to knock him out.”

Have you visualised your fight with Fury?

“I’ve fought him 75 times now. Over and over again I’ve seen different knockouts. I allow my mind to see different ways, I don’t just see it always one way because certain things may happen in the fight that I couldn’t visualise or I couldn’t see coming.

“In life we get blindsided and just like in a fight you can get blindsided. My mind is so open that I allow it to see it in a variety of ways. Each way I saw myself knocking him out.”

“My goal is what I’ve always set out to do – it’s to unify. After my first world title my aim was to unify. One champion, one face, one name. I won’t stop until I get that.

“I want that, I want to be able to say I was the undefeated, undisputed, the unified heavyweight champion of the world. No man can say that at this moment in time, all the belts are in different places. We have two champions now and no one can say it yet because of the situation that there is.”

Do you feel AJ’s team is buying time before he faces you?

“Of course they’ve been doing that. Look at all his team has been saying, even Barry Hearn [Eddie?] they’ve already said enough.

“If you’re a fan of his then of course you’re not going to want to see it because you want to continue to feel like you’re at the top.

“People can feel whatever they want. If they want to live through something then who am I to say not to? It’ll happen when it’s time. We all know they don’t want this fight or it would’ve happened. It would’ve happened, it’s plain and simple. Just like with me and Fury.

“This fight didn’t happen because we got together with our managers and promoters, this fight happened because of me and him having a discussion.

“Talking about it, being serious with each other and when you have a strong backing as a champion they’re gonna do what you want, not what they want, or what they feel is best for you. They can say what they think is best for you but at the end of the day you have the final say.”