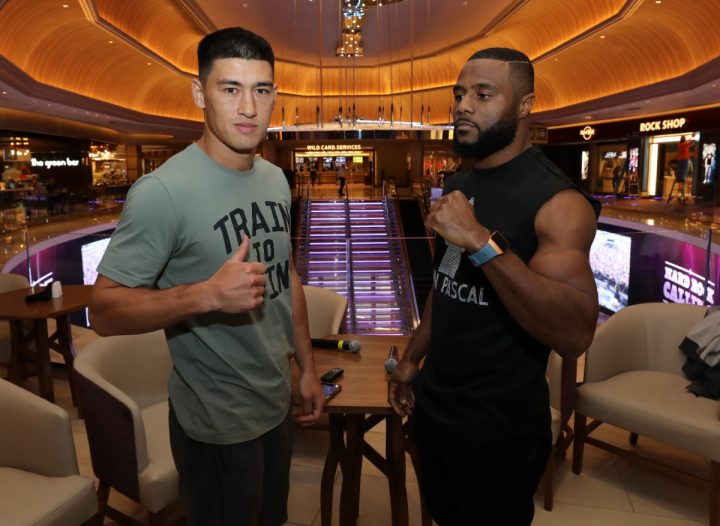 Bivol, 27, be headlining on HBO against one of best 175 lb fighters from the past in 36-year-old Pascal. Up up until recently, Pascal was considered to be over-the-hill by a lot of boxing fans, but he’s turned things around with two solid wins recently against Ahmed Elbiali and Steve Bosse.

Those victories have people thinking that Pascal still has a lot left in the gas tank. Whether the Canadian has enough left to beat a talented champion like Bivol is the major question. Pascal says he personally picked out the Russian Bivol to fight, so he must have spotted something in his game that makes him believe that he can defeat him. Otherwise, it’s going to be a long night for Pascal on Saturday night.

“I think right now he’s the best fighter in the light heavyweight division. But I’m going to try and stop him Saturday night,” Pascal said.

It’s debatable whether Bivol is the best fighter in the light heavyweight division. Before that can be decided, Bivol needs to beat Pascal, Adonis Stevenson, Badou Jack, Eleider Alvarez, Marcus Browne, Sergey Kovalev, Oleksander Gvozdyk and Artur Beterbiev. Bivol only needs to beat those eight fighters before he can be crowned the #1 guy at 175. Of course, it’s highly unlikely

Pascal has really only one chance of winning the fight against Bivol, and that’s by knocking him out. If Pascal can’t do that, Bivol will run away with the fight and give him a boxing lesson. Bivol is dangerous in the first 6 to 8 rounds. That’s when he tends to pour it on by throwing a massive amount of punches.

If Bivol’s opponents are still around by the second half of the fight, then they have a chance of giving him problems if they’ve got some punching power. Sullivan Barrera was able to land a lot of clean shots during the championship rounds in his fight against Bivol last March, but he was’t able to close the show. This allowed Bivol to get his second wind and come on strong in the 12th round to get a knockout. Bivol also gassed in the second half of his fight against Isaac Chilemba (25-6-2, 10 KOs) last August. Bivol still did more than enough to deserve a wide 12 round unanimous decision, but he struggled with Chilemba’s hand speed and his stamina in the late going of the fight.

Pascal has been around as a pro for 13 years; he’s got a ton of experience that Bivol could only dream of. Pascal showed what experience can do for a fighter in his recent win over the raw slugger Ahmed Elbiali (17-1, 14 KOs). Although Pascal was much older with more mileage on the tank compared to the 28-year-old Elbiali. Going into that fight, Pascal was seen as food for Elbiali in the eyes of a lot of boxing fans. Elbiali was a guy on the rise, who needed a win over an old lion like Pascal to add to his resume. Pascal showed that his experience against better fighters was too much for Elbiali to take. Pascal made adjustments early on, and took the fight to Elbiali until he quit in the 6th round. It’s going to be more difficult for Pascal to do the same thing against Bivol though, considering he’s a more polished fighter with a great amateur background. Bivol has the pedigree to make up for his lack of experience as a pro. Elbiali lacked the amateur background to pool from for him to be able to adjust to the pressure that the older fighter Pascal put him under. Bivol’s best fights as a pro have come against Sullivan Barrera, Isaac Chilemba, Trent Broadhurst, Cedric Agnew, Samuel Clarkson, Robert Berridge and Felix Vera. Those are very good fighters for a guy with as little pro experience as Bivol. His management has clearly moved him along quickly since he turned pro in 2014. As an amateur, Bivol didn’t lose a fight after 2011. Bivol won everything tournament he entered after 2011. He’s been improving by leaps and bounds in the last seven years. He’s not just been hanging around without getting better like some fighters do.

The body language that Pascal showed during the press conferences with Bivol isn’t what you’d like to see from a fighter. Pascal looked like the loser already. He clearly knows he’s up against a very good fighter in Bivol, and he hasn’t wanted to look him in the face. If you contrast the way Pascal acted before his fights against Bernard Hopkins, Carl Froch and Sergey Kovalev, it’s like two different fighters. Pascal was a lot more confident looking going into those fights compared to the way that he’s looked in the run up to his fight with Bivol.

Bivol will have too much youth, firepower and talent for the old warhorse Pascal on Saturday. Bivol will likely knockout Pascal within six rounds. Kovalev stopped Pascal in the 7th round in their rematch in January 2016. Bivol doesn’t punch with the same kind of power that Kovalev does, but he hits hard enough for him to KO Pascal if he hits him enough times. Bivol is a busier fighter than Pascal, and he’s a great combination puncher. Bivol is heavy-handed enough to KO Pascal once he starts hitting him a lot. Pascal’s opponents usually hit him with single shots. When he does face guys that combinations, he struggles, and falls apart. Bivol is going to be a major nightmare for Pascal. You can’t rule out an upset due to Pascal’s experience and punching power, but it’s still highly unlikely. Bivol is peaking right now, and he’s not going to come apart at the seams against a fighter like Pascal. If Bivol is going to lose to someone at 175, it’s going to need to be a good fighter like Adonis Stevenson, Artur Beterbiev, Marcus Browne, Badou Jack or Oleksander Gvozdyk. Those fighters are going to give Bivol the most problems when he eventually faces them.