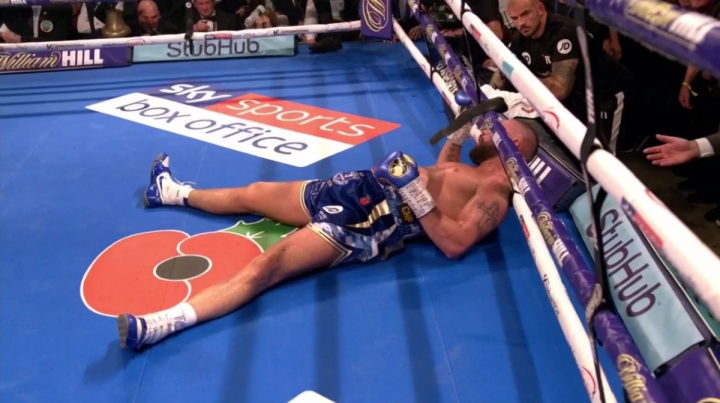 By Scott Gilfoid: After talking about retiring for months, former WBC cruiserweight champion Tony Bellew finally made it official on Thursday in retiring from he sport of boxing.

The announcement by the 35-year-old Bellew comes 12 days after his 8th round knockout loss to IBF/WBA/WBC/WBO cruiserweight champion Oleksander Usyk (16-0, 12 KOs) on November 10 at the Manchester Arena in Manchester, England.

“From the negative naysayers to the fans, today I am announcing I’m officially retired,” Bellew said. “There will be no more fights from me. The only things you’ll see me doing from here on in is to try and act sensible and behave myself. I’ve had a fantastic career. I’ve realized my dream. Thank you first and foremost for all the supporters.” Bellew said.

For all intents and purposes, Bellew has basically been retired since his title defense against BJ Flores in 2016. Since then, Bellew has had two circus fights against a shot David Haye, and then a title shot that he didn’t deserve against unified cruiserweight champion Usyk this month. The World Boxing Council made a good effort of justifying Bellew getting a crack at Usyk’s WBC cruiserweight belt by them pointing out that Tony is their WBC emeritus champion still after they stripped him of his regular WBC belt after he opted to move up to heavyweight to face David Haye in March of 2017 instead of defending the title against #1 mandatory challenger Mairis Briedis.

Bellew’s retirement announcement is expected to be short-lived, in view of the possibility that his promoter Eddie Hearn may lure him back for a fight against Andre Ward on Sky Box Office PPV. Ward, 34, would be open to a fight against the recently beaten Bellew for the right kind of money, and Hearn has deep enough pockets to make that fight happen. It would be the same type of situation as Bellew’s two fights against past his best David Haye. Ward is not the best fighter in the cruiserweight division. In fact, he’s never fought in that weight class. It would be just two old timers fighting it out for the sake of paydays and the hardcore boxing fans that care about them.

Bellew (30-3-1, 20 KOs) was knocked out after he angered Usyk at the end of the 7th round. Usyk came out for the 8th round looking like an angry bull ready to trample Bellew. The fight was over straightaway with Usyk hitting Bellew with two solid left hands to the head that planted him flat on his back. In hindsight, it looked to some boxing fans like Usyk had carried Bellew for the first seven rounds in the same way that Floyd Mayweather Jr. had taken it easy on UFC fighter Conor McGregor in their circus fight in August 2017.

“It is time for me to finally leave the ring, Bellew said on his Instagram account in making an official announcement of retiring from boxing. “The bell has rung for the final time, and I want to thank you all for the support you have given me over the years. It is not the end of my story though so keep an eye…‪#bomberbellew #retirement,” Bellew said. ‬

You’ve got to give Bellew’s promoter Eddie Hearn a lot of credit for the way that he was able to maneuver a limited fighter into position for him to win the vacant WBC cruiserweight title in 2016 against Ilunga Makabu. If Hearn had matched Bellew in the wrong way by putting him in with a good cruiserweight like Murat Gassiev, Usyk, Yunier Doritocs, Briedis, Denis Lebedev or Krzysztof Glowacki, he likely would have lost and his career wouldn’t have been what it was. Hearn matched Bellew against arguably the only guy he was capable of beating in Makabu, and he was able to beat him to win the vacant WBC cruierweight title in 2016. The WBC obviously helped out by them ranking both Bellew and Makabu high enough with their organisation for the two of them to fight for their belt. If the WBC had gotten their rankings right by placing Usyk, Gassiev, Dorticos, Gassiev or Krzysztof Glowacki at the top of their rankings at cruiserweight, Bellew likely would have lost to all of them and never gone on to get the big paydays against Haye and Usyk. Although limited in talent, Bellew went on to make more money than guys with more talent at the world level, thanks to Hearn’s help with his careful match-making. Bellew helped out obviously with his mouth. He was able to trash talk a great deal to help create interest in his fights against guys that weren’t all that talented. Haye was a good fighter during his prime, but he was physically done by the time Bellew got to him in 2017. If the two of them had traveled back in time to 2010, Bellew likely would have been smashed by Haye.

After Bellew’s 6th round knockout loss to Adonis Stevenson in 2013, he was viewed as done as a fighter. He looked so bad against Stevenson that there was no belief that he would ever win a world title. However, Bellew them moved up to cruiserweight and reeled off six wins over soft jobs before facing a beatable guy in Makabu to win the vacant WBC cruiserweight title by stopping him in the 3rd round in Goodson Parker in Liverpool, England. Bellew was then supposed to defend his WBC cruiserweight belt against his mandatory challenger Mairis Briedis in his first defense, but Hearn worked his magic to have the WBC let Tony defend against fringe #14 WBC contender BJ Flores. After that fight, Bellew moved up to heavyweight to face Haye rather than fight Briedis. At that point, Bellew was no longer bothering to defend his WBC title, as it would have required him to face Briedis, who was looking unbeatable at the time. Haye was an old, inactive and vulnerable fighter, just perfect for a guy like Bellew to beat. The rest is history. Bellew beat Haye twice, and then was given a title shot against Usyk for his four belts and end up losing badly to him.

It would be nice to see Bellew hang around long enough to face Stevenson in a rematch. Bellew’s boxing fans believe that he would beat Stevenson at cruiserweght. This would be the perfect change for Bellew to try and prove them right. Stevenson, 41, said he would be open to moving up to cruiserweight to face Bellew. It’s unclear whether Stevenson would be still willing to face Bellew now that he’s been knocked out by Usyk, but you never know. If Hearn throws enough money at Stevenson, he might be willing to move up to cruiserweight to fight Bellew for the sake of the boxing fans and of course money. It’s unlikely that Bellew will bother fighting Stevenson again, because he’s all wrong for him. Stevenson is faster than Usyk, more powerful, and much more courageous. Stevenson wouldn’t wait around until the 8th round before he starts bouncing huge left hands off the skull of Bellew. Stevenson would be doing it from the opening round, and he might end up knocking Bellew out in the 1st round. That would look bad for Bellew’s legacy, so he’s not going to want to take a chance of fighting a guy that whipped him so badly five years ago in 2013. Bellew wasn’t even competitive in the slightest against Stevenson. Does that make Stevenson a better fighter than Usyk? I’d say say so. Usyk is largely overrated in this writer’s opinion. Usyk almost lost to Briedis, looked horrible against Michael Hunter, and gave away a bunch of rounds to Bellew. That suggests that Usyk isn’t as good as boxing fans think he is.

‪It is time for me to finally leave the ring, the bell has rung for the final time and I want to thank you all for the support you have given me over the years, it is not the end of my story though so keep an eye on www.bomberbellew.co.uk ‬- link in my bio ‪#bomberbellew #retirement ‬