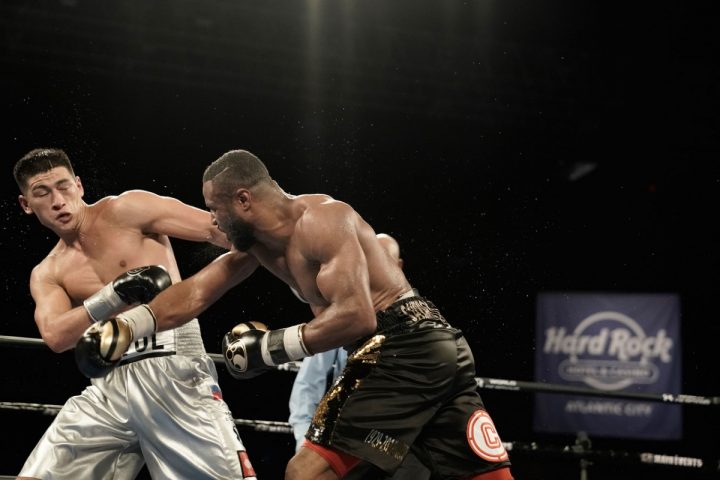 Bivol showed incredible talent and promise tonight, but the thing that held him back was his lack of major punching power. The shots that Bivol was landing flush on Pascal would have been knockout blows if it had been Sergey Kovalev or Artur Beterbiev throwing them. Bivol’s was lacking.

Bivol was mostly jabbing throughout the fight. He threw and landed a lot more punches than Pascal, but most of the shots were jabs. Bivol was mixing up his punches in going to the body with left hands, and throwing rights to the head. Most of the punches thrown by Bivol were jabs. It was a very technical performance from the Russian, and that made the fight boring to watch at times. If not for Pascal making things interesting with his attacks, it would have been a sleep-inducing fight to watch.

“(Pascal) used his experience and he was powerful in this fight. I used all of my skills to win this fight,” said Bivol.

Like in his other recent fights, Bivol lost energy in the championship rounds, and was unable to close the show. It was the 36-year-old Pascal who appeared to be fighting harder and doing more damage in rounds eight through twelve. In the 10th, Pascal shook Bivol up after throwing a flurry of shots. Bivol wasn’t ready for this sudden surgery of punches from Pascal, and he took them. One of the shots stunned Bivol. He made it out of the round though, but was a surprise that he got hurt by a fighter that he was dominating in the first nine rounds.

This was not an impressive performance by the 27-year-old Bivol. He showed that he doesn’t hit hard enough to score knockouts win facing

It’s going to be difficult for Bivol to win over many boxing fans unless he changes his fighting style. He’s too technically oriented, and lacks the power to make his fights exciting to watch. Bivol’s fighting style is reminiscent of former heavyweight champion Wladimir Klitschko. That’s not a compliment. Wladimir had a bad habit of making his fights boring much of the time when he was boxing his opponents.

Bivol was doing a lot of that tonight, and not showing the kind of aggression and courage that he needed for him to knockout Pascal. Sergey Kovalev did a much better job of beating Pascal in his two fights than Bivol did tonight. It makes one wonder whether Bivol has the talent, power and heart needed for him to beat the best fighters in the light heavyweight division. From what we saw of Bivol tonight, you have to think that he would lose to the following light heavyweights: Kovalev, Badou Jack, Adonis Stevenson, Oleksander Gvozdyk, Artur Beterbiev, Eleider Alvarez and Marcus Browne. There’s nothing wrong with Bivol losing to all of those fighters, as that makes him a top 10 light heavyweight, which isn’t a bad thing. Bivol just doesn’t have the kind of overall talent that he needs for him to be considered one of the best.

It would be a bad idea for Bivol to look to fight in a unification fight with any of the champions at light heavyweight. Those guys are too dangerous for him, and he doesn’t hit hard enough for him to be mixing it with them. What Bivol should do is work on losing some weight so that he can move down to super middleweight. That’s a division that Bivol should be fighting in. His power would be better at 168 than it is at 175, and he might be able to dominate the weight class if he could beat the likes of Callum Smith, Jose Uzcategui and Gilberto Ramirez. Those are fighters that Bivol would have a chance of beating if he moved down in weight.

It would be interesting to see what Bivol could do at super middleweight, for reason being that he doesn’t hit hard enough for him to be fighting the top light heavyweights. Sooner or later, one of those guys are going to knockout Bivol. He would be in trouble in a war in which one of the top fighters goes after his chin and forces him to brawl with them. If Beterbiev gets the light hitting Bivol in a brawl, he’ll have a good chance of knocking him out.

Pascal loses again. This is his second defeat in his last four fights. It’s not the end of the world though for Pascal. He looked good enough tonight to where he would have a chance of beating WBO champion Eleider Alvarez, and you would have to favor him over guys like Anthony Yarde. Pascal doesn’t need to retire from boxing. He can still be involved in the sport, and get important fights from time to time. He’s only 36. That’s not that old.

In other boxing results on the card, 2016 Olympian bronze super bantamweight Murodjon Ahkmadaliev (5-0, 4 KOs) defeated the brave but limited Issac Zarate (16-3-3, 2 KOs) by a 9th round knockout. Zarate took a lot of punches in the first eight rounds before the referee finally stepped in and halted it in the 9th. The fight should have been stopped a lot earlier. Ahkmadaliev looked good, but his punching power was lacking. Zarate shouldn’t have been able to make it to the 9th round if Ahkmadaliev had power. Ahkmadaliev looked good though. It’s unclear whether he’ll be able to handle having to go the distance to win most of his fights. When that happens, it eventually catches up to a fighter because they need to take a lot of shots to go 12 rounds each time. If Ahkmadaliev needs to go 12 rounds against a big puncher like Isaac Dogboe, he might not be able to do it.

Junior middleweight prospect Israil “The Dream” Madrimov (1-0, 1 KO) defeated Vladimir Hernandez (19-3, 6 KOs) by a 6th round knockout. It was a good performance by Madrimov. He showed off his punching power, and he looked great in doing a back flip after the fight.

In the performance of the night, light welterweight prospect Shakhram Giyasov (5-0, 4 KOs) stopped Miguel Zamudio (41-11-1, 25 KOs) in the 1st round. It was a great performance by the 2016 Olympic silver medalist Giyasov. 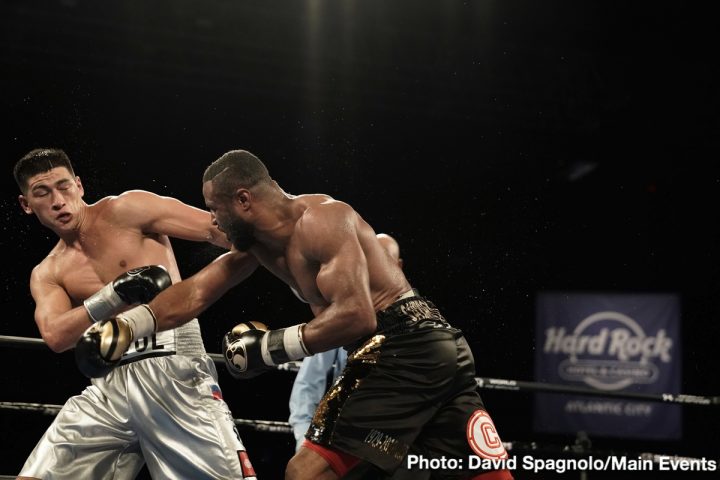