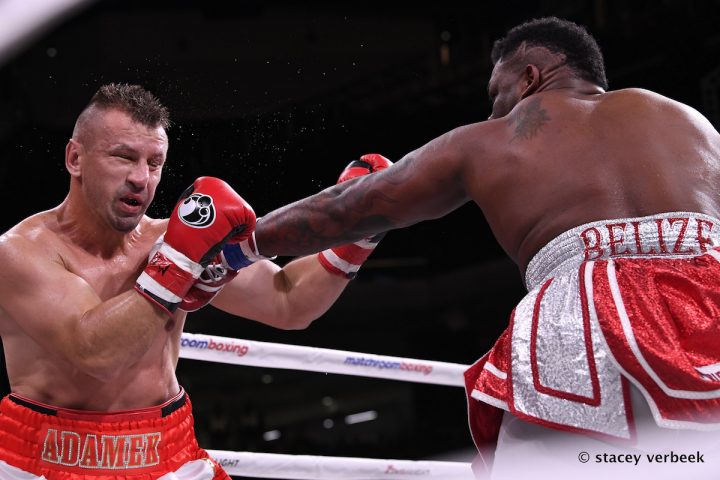 By Tim Royner: Undefeated heavyweight Jarrell ‘Big Baby’ Miller (22-0-1, 19 KOs) stayed in the hunt for a world title shot in knocking out former two division world champion Tomasz Adamek (53-6, 31 KO) in the 2nd round in a massacre on DAZN on Saturday night at the Wintrust Arena in Chicago, Illinois.

Looking huge in size, the much bigger Miller knocked the 41-year-old Adamek down after hurting him with a left and then nailing him with some huge follow up shots to put him down on one knee. Adamek was given a count by the referee and decided not to get back to his feet.

In round one, the plodding 317 pound Miller stalked the 227 pound Adamek around the ring, hitting him with hard body and head shots, and causing him to back away to safety. Adamek lacked the mobility to get away from Miller, which would have been the smart thing for him to do if he wanted to have a chance of winning. It was crazy for Adamek to stand in front of Miller in the early rounds of the fight given the size and power mismatch. The first round ended with Adamek looking like a hunted man. It was clear that Adamek wasn’t going to last long unless he put his track shoes on and ran from the 6’4” Miller. Adamek has never been a mobile fighter even in his earlier years. He’s always been a slugger, who cuts easily and takes a lot of punishments in fights that end in a blood bath. Now that Adamek is 41, he had no chance of getting away from Miller even if he wanted to.

After Miller caught Adamek with a big shot that hurt in in the 2nd round, the Polish fighter backed up against the ropes and put himself in a helpless position where he had no chance of escaping. Miller then calmly knocked Adamek to the canvas.

”It was about having fun. The politics in boxing take the fun away,” ‘Big Baby’ Miller said to Sky Sports after his knockout win over Adamek. ”I just hope it pleased the crowd I’ve been waiting for a shot at Anthony Joshua and I know Eddie Hearn is keeping him away from me, but what can I say? Eddie is a man of his word and I do think the Joshua fight will come,” said Miller.

The Joshua fight will come for Miller, but only after he beats Fres Oquendo to capture the vacant WBA World heavyweight title in December. If Miller wins that fight and possibly another fight in the first quarter of 2019, then he’s expected to be Joshua’s opponent in the second half of 2019. Joshua will need to win his April 13 fight against either Dillian Whyte or Deontay Wilder. It’s still very much up in the air who Joshua will be fighting on the 13th of April. Whyte is fighting on December 22 against either Luis ‘King Kong’ Ortiz or Dereck Chisora. Whyte could lose the fight against either of them, and that would put Hearn in the position where he’ll need to have one of those guys face Joshua. In that case, Hearn might prefer to let Miller face Joshua.