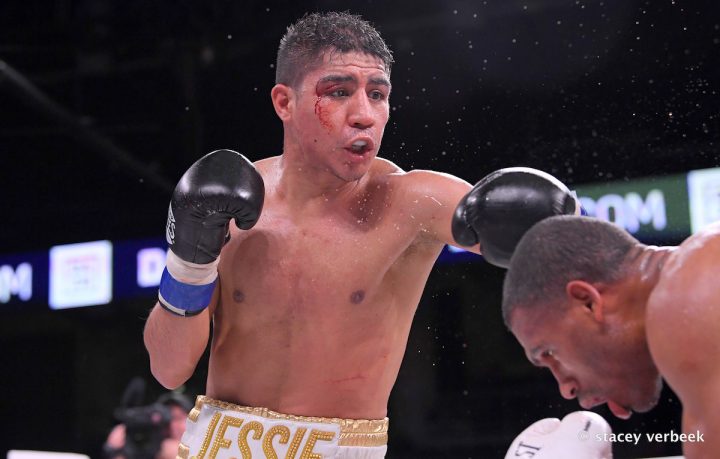 By Mike Smith: Jessie Vargas (28-2-2, 10 KOs) blew his chance of winning on Saturday night when he was knocked down hard in the 12th round by Thomas Dulorme (24-3-1, 16 KOs) and had to settle for a majority draw at the Wintrust Arena in Chicago, Illinois. The vacant WBC Silver welterweight title was on the line tonight. It remains vacant for the time being.

The judges scored the fight 115-111 for Vargas, 115-113 for Dulorme, and 113-113. Boxing News 24 scored it for Dulorme by a 116-110 score. Dulorme was the stronger, faster and the better fighter though most of the fight. Vargas knocked Dulorme down in the 10th round after catching him with a shot when after he’d thrown a big shot. However, Dulorme did well in coming in the 11th and 12th round in getting the better of Vargas.

This was Vargas’ second consecutive 12 round draw. Last April, Vargas fought to a 12 round draw against former four division world champion Adrien ‘The Problem’ Broner. In both fights, Vargas was extremely fortunate to get a draw, as he finished poorly in both fights. Broner got the better of Vargas in the second half of the fight just as Dulorme did tonight.

”He was better than I was expecting, but all credit to Thomas Dulorme,” Vargas said after the fight to Sky Sports.

Dulorme had the better hand speed and punching power than Vargas. If Vargas had watched Dulorme’s fight against Terence Crawford in 2015, he would have seen that the Puerto Rican fighter was fighting him to a standstill for the first five rounds until getting taken out in the 6th round. Crawford was struggling with the hand speed and power of Dulorme. It’s not surprising though, as Dulorme was beating Crawford to the punch and hitting him with rockets. Crawford wasn’t reacting well to getting hit so hard by Dulorme. We saw the same thing tonight with Dulorme landing big shots on Vargas.

”I came out with a draw when I wanted to come out victorious, but we will go back to the drawing board and come back better,” Vargas said.

“I wanted to fight for a world title, but we will sit down and talk with my promoter,” Vargas said.

It might be better for Vargas’ promoter Eddie Hearn to think about cutting his losses and let him go and sign talented welterweights that have the potential to go somewhere. Vargas has never been a great fighter to begin with. Before beating Sadam Ali to win the WBO welterweight title in 2016, Vargas had controversial wins over Anton Novikov and Khabib Allakhverdiev. The last two fights by Vargas show pretty clearly that he’s not going to be a factor in the welterweight division. If Hearn is fine with that, then he should keep him with his Matchroom Boxing USA promotions for his DAZN cards.