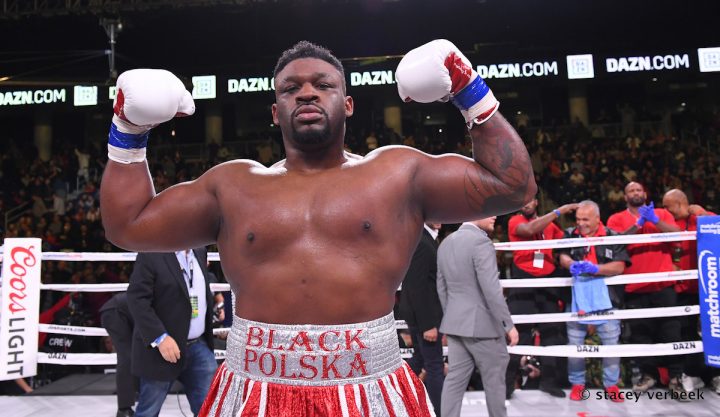 By Mike Smith: The 317 pound force of nature Jarrell ‘Big Baby’ Miller (22-0-1, 19 KOs) is looking unbeatable after knocking out Tomasz Adamek (53-6, 31 KOs) in two rounds last Saturday, and he now wants Anthony Joshua to add his name to his growing resume of wins.

Joshua’s promoter Eddie Hearn isn’t about to make the fight with Miller. He wants to let the fight marinate until next year, and even then it’s not for sure he makes it. If Miller continues to fight the way that he’s been showing lately, he may find himself in the back of the long line with Deontay Wilder waiting for a fight against Joshua.

Last Saturday in his first fight on DAZN, Miller showed the boxing world that he’s a different fighter at 317 pounds than he was when he was dieting and working hard to keep his weight artificially below 300 pounds. Miller’s power has improved now that he’s letting himself fight at his natural weight, and his speed and mobility are the same as when he was draining himself to fight in the 280s and 290s. In a word, Miller is now transformed himself into Superman with the power and aggressiveness that he now possesses.

Adamek, weighing only 227 pounds, was no match for the behemoth that shared the ring with him last Saturday at the Wintrust Arena in Chicago, Illinois. When Adamek tried to stand his ground, Miller landed some tremendous shots that sent him in retreat immediately. Miller then closed the distance and blasted Adamek into oblivion. It would have taken a superhuman being to get up from the knockdown. Adamek was not going to be able to continue fighting no matter what.

Miller used his moment in the spotlight to call out Joshua. The boxing fans that witnessed Miller’s destruction of Adamek were in awe, and quite pleased at hearing him call out Joshua. The fans are already talking in social media about a future fight between Joshua and Miller. There were arguably more fans talking about Miller fighting Joshua in 2019 than Wilder after seeing what ‘Big Baby’ did to to the 41-year-old Adamek. No one has ever done that to Adamek before in knocking him out in two rounds.

”Eddie Hearn is keeping him away from me right now, but what can I say about Eddie. He’s made promises and he’s kept his word, so I think the AJ fight is going to come through sooner or later,” Miller said to skysports.com.
.
Miller’s next move is to fight Fres Oquendo for the WBA ‘regular’ heavyweight title later this year, but he’s hoping that he can get a shot against IBF, WBA and WBO champion Joshua in the first half of next year for a unification fight.