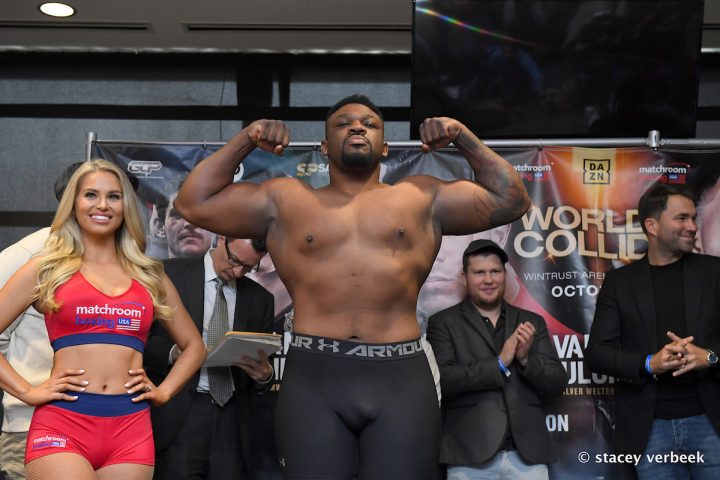 By Mike Smith: Heavyweight contender Jarrell ‘Big Baby’ Miller (21-0-1, 18 KOs) will be hoping to stay undefeated on Saturday night when he takes on Tomasz Adamek (53-5, 31 KOs) in a 12 round fight on DAZN. Miller has lofty goals in wanting to win the WBA ‘regular’ heavyweight title in December, and then face IBF/WBA/WBO heavyweight champion Anthony Joshua in 2019.

Miller needs a win tonight over Adamek to punch his ticket to contest for the vacant World Boxing Association ‘regular’ heavyweight title against 45-year-old Fres Oquendo in December. Winning the WBA title will help Miller get a unification fight against Anthony Joshua in the second part of 2019. Miller can use the WBA title as a pawn to get the big money fight against Joshua that he badly craves. It’ll also give his promoter Eddie Hearn the cover that he needs to match Miller against Joshua instead of someone like WBC heavyweight champion Deontay Wilder. The boxing fans want to see Joshua fight Wilder, and not Miller, but Hearn can argue that a unification fight i too big to turn his back on.

Adamek has the boxing kills, experience and enough power to beat Miller tonight. What he doesn’t possess is the size and the youth. Miller weighed in at 317 pounds at Friday’s weigh-in, and he’ll be enjoying a 90 pound weight advantage over Adamek, who weighed in at 227 lbs. Adamek has a chance of winning this fight if he can take Miller into the deeper rounds of the fight. Miller’s 317 pounds is the highest of his nine-year pro career, and it could hurt him if he’s forced to go into the later rounds of the fight.

Miller was slow and sluggish in his last fight against former world title challenger Johann Duhaupas after weighing in at 304 pounds, which at the time was a career high for him. Miller seems to think that the heavier he is the better he fights. He should have realized in the Duhaupas fight that he was slowed down by the extra weight, but he clearly didn’t learn from that mistake, as you can tell by the 317 pounds that he weighed in last Friday. Miller is betting that he’ll be able to knock Adamek out in the early rounds of the fight. If he doesn’t get that knockout, then we could see Big Baby gas out in the second half of the fight.

Miller, 30, and his promoter Eddie Hearn both seem to be overlooking the 41-year-old Adamek, who will be fighting for his career tonight. Adamek is at the stage in his career where he can’t afford a loss if he wants to stay relevant and continue to be able to get big fights. Adamek has won his last three fights in beating Joey Abell, Fred Kassi and Solomon Haumono. Before those wins, Adamek was stopped in the 10th round by former two-time world title challenger Eric Molina in April 2016. Adamek had gotten the better of Molina in the first nine rounds and it looked like he was going to win the fight with ease going into the 10th round. However, Molina suddenly turned off the gas and was able to get a KO in the 10th. Adamek will need to make sure he doesn’t let ‘Big Baby’ Miller get on a roll like Molina did in the 10th round if he wants to win the fight tonight. Miller doesn’t put his punches together with the same speed and power that Molina does, but he’s still a dangerous guy due to his nonstop pressure.

”He’s more durable than he looks,” Hearn said to skysports.com about Miller. ”Of course, he wants a shot at Anthony Joshua, everybody does, but I think his next move [if he beats Adamek], realistically, is to challenge for the WBA regular title. Then he can try and force a fight with Joshua towards the end of 2019. Miller is a real threat to the heavyweight division – a big puncher, huge in size and very, very strong,” Hearn said.

Hearn is giving Miller a little too much credit in thinking that he’s a threat to the heavyweight division. Miller is a good heavyweight, but he’s not much of a threat to the likes of Joshua, Deontay Wilder, Luis Ortiz and Dillian Whyte. Those are unquestionably the best heavyweights in the division. Miller is a next level down type of heavyweight. He’s a cut above the likes of Gerald Washington, but not someone that is going to beat guys like Joshua, Wilder, Whyte, Ortiz or probably not even an old war horse like Kubrat Pulev. Hearn is going to let Miller get a title shot against Joshua anyway, for the reason that he promotes both guys and can make good money if he matches them against each other.

It’s been nine years since Adamek last held a world title when he was the International Boxing Federation cruiserweight champion from 2008 to 2009. Adamek vacated the IBF belt in 2009 and moved up to heavyweight in search of bigger paydays. Adamek got the payday he was looking for in challenging WBC heavyweight champion Vitali Klitschko for his title in 2010. The 6’7″ Vitali was too big and too powerful for Adamek, and he ended up stopping him in the 10th round in 2011. Three years later, Adamek lost to Vyacheslav Glazkov and Artur Szpilka in back to back fights.