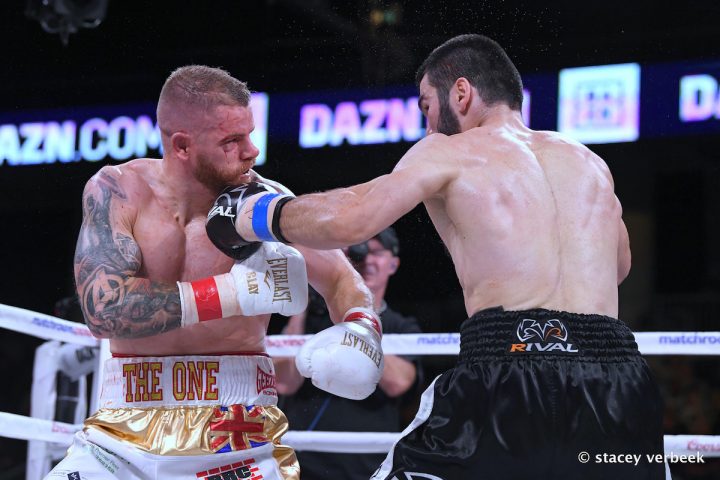 By Tim Royner: IBF light heavyweight champion Artur Beterbiev (13-0, 13 KOs) had to get up off the canvas from a second round knockdown to come back and stop previously unbeaten challenger Callum Johnson (17-1, 12 KOs) in the 4th round on Saturday night at the Wintrust Arena in Chicago, Illinois.

Beterbiev, 33, landed a short hook that dropped Johnson in the 4th. Johnson was too hurt to get back to his feet after the knockdown. It was incredible how such power Beterbiev was able to generate on a shot that was thrown at such short range to hurt Johnson. Beterbiev had done this before in the past in the 2nd round after hitting him with short punches. Beterbiev did the same thing in knocking out Isido Prieto in the first round in 2016.

Earlier in the fight, Beterbiev knocked Johnson down in round one. It was a knockdown that came late in the round after Beterbiev caught Johnson on the break. Johnson was hurt from the shot. In the second round, Johnson repaid Beterbiev in knocking him down hard with a beautiful left hook to the head. Beterbiev was in bad shape after he got up and he was there for the taking if Johnson had gone for the finisher. Surprisingly, Johnson hung back and fought cautiously after Beterbiev got back to his feet. Johnson didn’t go after Beterbiev the way that he should have to score the knockout. In hindsight, Johnson will regret not going for the knockout when he sees a replay of the fight.

In the 3rd round, Johnson got the better of the still hurt Beterbiev in connecting with some hard shots. Beterbiev was landing his powerful jab, but not fighting the way he had in the 1st round. Beterbiev looked cautious and not willing to put it on the line after tasting Johnson’s huge power.

“It’s boxing, it’s one experience for me and I am happy about that,” Beterbiev said to Sky Sports. “I am happy with the win, and to win by knockout. I was down once, so it was good for boxing. Everyone can go down in boxing. At least I went down, got up and won!”

All in all, it was a great fight by both Beterbiev and Johnson. There were no losers in this fight. Johnson raised his stock in fighting Beterbiev to a standstill up until getting knocked out by him in the 4th round. Johnson would have knocked out a lot of guys in the top five in the light heavyweight division if he’d had someone else in the ring with him tonight instead of Beterbiev. It’s too bad Johnson lost. He’s capable of giving the top fighters huge problems with his power, size and his aggressive style of fighting. Johnson starts so fast that he blitzes his opponents before they’ve had a chance to get properly warmed up. He jumps on them so suddenly that he ends the fight before they can ramp up their game. Beterbiev was able to somehow take Johnson’s power long enough to take him out with his own equally impressive power.

WBA super bantamweight champion Daniel Roman (26-2-1, 10 KOs) turned back a spirited effort from challenger Gavin McDonnell (20-2-2, 5 KOs) in stopping the 32-year-old in the 10th round. Roman landed a big shot to the head of McDonnell in the 10th. Roman then poured it on in nailing the badly hurt lanky 5’11” McDonnell until he hit the deck. The bout was waived off at that point.