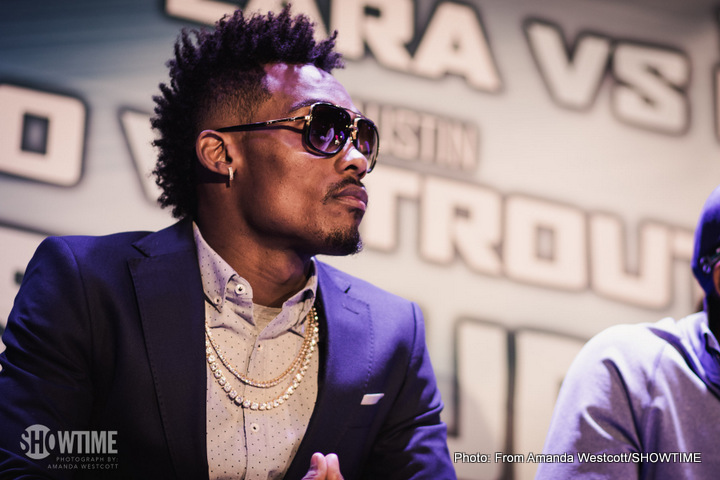 By Jeff Aranow: Daniel Jacobs wants to let a potential match-up against unbeaten WBC interim middleweight champion Jermall Charlo marinate for as long as possible before they finally face each other. But then again, it’s a fight that might not happen if Jacobs’ promoter Eddie Hearn offers Charlo an extremely low purse split.

Jacobs laughingly said last Saturday that Hearn has said that he wants to offer Jermall a 90-10 split. A split that lopsided has a message attached to it. ‘Don’t bother, Jermall, because you’re never going to get a chance to fight Jacobs.’

Jacobs (35-2, 29 KOs) and Charlo have exchanged trash talk for the past year, and it’s no secret that the two of them want to face each other.

Jacobs won the vacant International Boxing Federation middleweight title last Saturday night in beating Sergiy Derevyanchenko (12-1, 10 KOs) by a 12 round split decision at Madison Square Garden in New York. It was a close fight, but Jacobs did enough to earn a decision.

“Eddie [Hearn] said, ‘90-10 split,’” Jacobs said about what Hearn would offer WBC interim middleweight champion Jermall Charlo for a fight. ”The feud we’re having, it’s building. He’s fighting with Monroe [next]. He has to look good. We’ll talk about that in the near future,” Jacobs said.

Jacobs talks as if he’s going to trounce Jermall, 28, when the two of them ever face each other, but a lot of boxing fans believe that this is going to be a mismatch. Charlo has been looking much more explosive than Jacobs in the last four years of his career. Jacobs will do a good job of talking up the fight outside if the ring, but when the match does eventually take place, it could go badly for Daniel. It would be better for Hearn to make sure he gets Jacobs the money fights against Saul Canelo Alvarez and Gennady Golovkin before he puts him in with Charlo. Right now, Jacobs would have his hands full even trying to beat Jermall’s twin brother, WBC junior middleweight champion Jermell Charlo.

Hearn has a way of making a fight not happen by giving low-ball offers. For example, Hearn has been offering WBC heavyweight champion Deontay Wilder a flat fee offer of $15 million to face IBF/WBA/WBO champion Anthony Joshua in a unification fight.

“You know, I want that fight,” Jacobs said about Jermall Charlo. “That’s a fight that has been building for some time now, but we also have management and promotions that are going to get bigger and better fights that make sense for my career,” Jacobs said.

If Jacobs has his fights shown on DAZN, and Jermall on Fox and Showtime, then it’s going to be next to impossible for the two to face each other. Jacobs and Hearn can use that as an excuse for not making the fight happen.