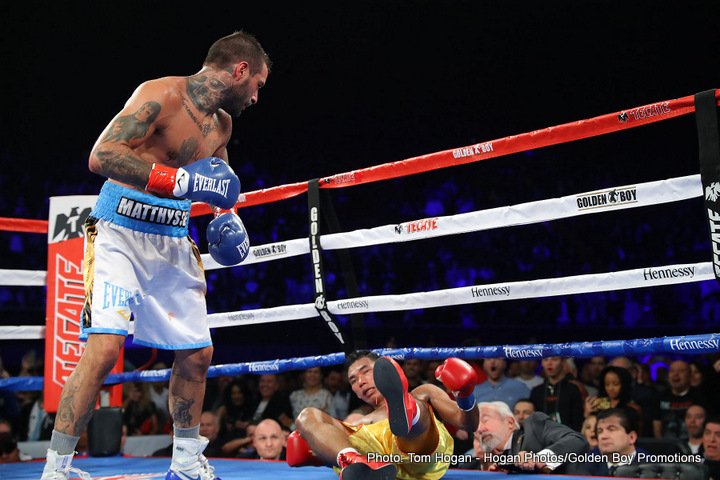 By Allan Fox: Former WBA ‘regular’ welterweight champion Lucas Matthysse announced his retirement from boxing on Wednesday. After 14 years as a pro, the 36-year-old Argentinian Matthysse chose to wrap up his career a little two weeks after losing to Manny Pacquiao by a 7th round knockout on July 15 on Kuala Lumpur, Malaysia.

Matthysse made the 39-year-old Pacquiao look good, which is hard to do at this point in the Filipino star’s career. The lack of hand speed for Matthysse was the biggest problem. Whatever speed Matthysse once had has totally disappeared since he returned to the sport in 2017 after sitting out of the ring for two years since 2015.

”Today I decided to hang up the gloves as another stage in my life is coming,” Matthysse said on his Instagram site.

Like any retirement news announcement, Matthysse might be back inside the ring if a promoter comes along with a nice payday offer against a top fighter from 140 or 147. It’s hard to imagine Matthysse will reject a big payday against one of the young lions in the sport. Obviously it would be in Matthysse’s best interest to keep his career alive by fighting some soft jobs to stay relevant. It’s no good for Matthysse to sit outside of the ring collecting dust and winding up being forgotten by the boxing public.

“I’m retiring from boxing 8-1-2018 and many thanks to all the people I met through boxing,” Matthysse said.

Matthysse has lost two out of his last four fights since 2015. He was stopped in the 10th round after suffering an eye injury against Viktor Postol on October 3, 2015. The injury kept Matthysse out of the ring until May of 2017. He returned to the ring to stop Emmanuel Taylor in the 5th round to win the vacant World Boxing Association Inter-Continental and BA International welterweight title. Despite being out of the ring for two years, Matthysse’s punching power looked as good as ever. The only thing that he had lost was his hand speed and his sharpness. Last January, Matthysse defeated previously unbeaten Tewa Kiram by an 8th round knockout to claim the vacant WBA World welterweight title. Matthysse struggled in the fight until knocking Kiram down twice in round 8 to get the stoppage.

Besides his win over Kiram, the high points of Matthysse’s long pro careers were his wins over Ruslan Provodnikov, John Molina Jr., Lamont Peterson, Roberto Ortiz and Humberto Soto. The low points of Matthysse’s career were is losses to Devon Alexander, Zab Judah, Danny Garcia, Viktor Postol and Pacquiao. Matthysses defeats to Alexander and Judah were both controversial, as he appeared to do enough to deserve wins against those two.

Canelo: “Golovkin’s power is nothing out of this world” »