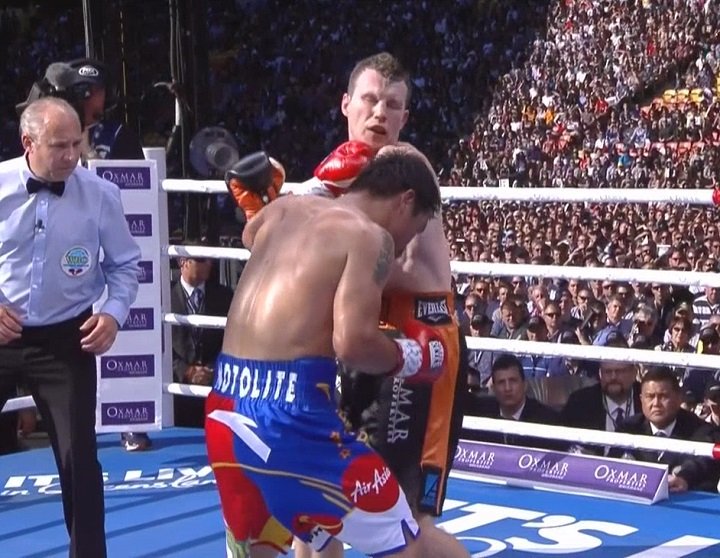 Horn, 30, beat Pacquiao by a controversial 12 round unanimous decision on July 2, 2017 in Brisbane, Australia. Horn lost his World Boxing Organization

The way that Horn roughed Pacquiao up last year, it’s doubtful that the Filipino star will bother ever giving him a rematch. It would likely be too much of an MMA type of fight for Pacquiao if he were to agree to fight the 5’9” Horn a second time. Pacquiao could suffer cuts if he winds up getting head-butted repeatedly by Horn, and he can’t afford to be injured and put on the shelf for a prolonged period of time.

It looks like Horn is in pursuit of a payday against Pacquiao. The obvious guy that Horn should be trying to get a rematch with right now is Terence ‘Bud’ Crawford, not Pacquiao. However, there’s not the same kind of money in a rematch with Crawford like there would be for Horn if he could lure Pacquiao back to the Brisbane, Australia to fight him again at Suncorp Stadium in front of 50,000+ boxing fans. Pacquiao has the popularity to bring in a huge crowd in Brisbane. As talented as Crawford is, he can’t bring in the same kinds of numbers due to his lack of name recognition.

Pacquiao didn’t mention Horn’s name as an option for his next fight for later this year. Horn’s chances of getting a rematch with Pacquiao aren’t so good due to him being stopped in the 9th round by Terence Crawford last month on June 9 in Las Vegas, Nevada. Crawford took Horn’s WBO 147 lb. title with ease, beating him from pallor to post for nine rounds before the fight was finally halted. Pacquiao would have a hard time beating Horn in Australia. A lot of boxing fans thought Pacquiao was robbed by the judges that worked the Horn fight last year in Brisbane. Some fans believe Pacquiao’s former promoter Bob Arum put him in a position where he would lose his WBO title by having him fight the Top Rank promoted Horn in Australia, so that he could try and turn Crawford into a star. Crawford beat Horn but he’s still not a star. A lot of fans saw Horn as a fake champion after he beat Pacquiao last year. Horn roughed Pacquiao up for 12 rounds, cutting him twice with accidental head-butts. Horn looked out of control with the roughhouse tactics he was using against Pacquiao. The referee Mark Nelson didn’t take points off from Horn despite his roughing up of Pacquiao.

In contrast to Horn, Matthysse (39-5, 36 KOs) fought a clean fight against Pacquiao, and he was no match at all. Pacquiao battered Matthysse around the ring with his left hooks, uppercuts and straight punches down the middle.