Canelo: “Golovkin’s power is nothing out of this world” 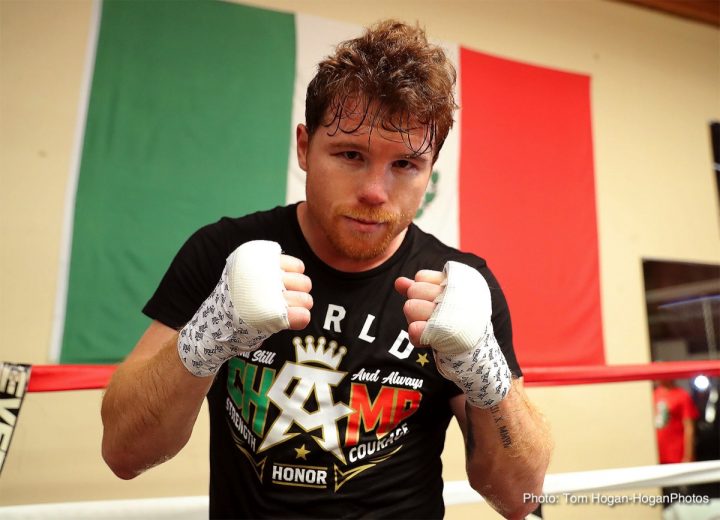 By Dan Ambrose: Saul Canelo Alvarez says he took Gennady ‘GGG’ Golovkin’s best power shot in the 5th round last September, and it didn’t hurt him one bit. After tasting GGG’s power in the first fight, Canelo (49-1-2, 34 KOs) sees him as harmless to him and unable to hurt him.

GGG and Canelo will be facing each other in a rematch on September 15 on HBO pay-per-view at the T-Mobile Arena in Las Vegas, Nevada. The start time for the fight is at 8pm ET/5pm PT. This is the same venue was the first fight between Canelo and GGG. It’s unclear why Golovkin’s management agreed to fight Canelo a second time in Las Vegas after the controversy of the first fight. Golovkin might need a knockout to win.

The fight was a different type from GGG than what what we’ve seen before from him. Instead of looking to knockout Canelo like he’d done against most of his opponents, Golovkin boxed him from range using his jab through most of the contest. Golovkin’s jab helped him dominate Canelo from the outside. Golovkin both out-punched and out-boxed Canelo, but the Las Vegas judges shocked the boxing world by scoring it an unpopular 12 round draw. The fans wanted to see an outcome that matched the fight that they witnessed, but judges were scoring the fight differently than from how the fans saw it.

”He’s supposed to be the best, and I felt very good in the first fight. His power is nothing out of this world,” Canelo said.

Canelo is looking smaller now that he’s working hard on his conditioning for the rematch with GGG. If Canelo loses strength for the rematch with GGG, he’s going to have a lot of problems keeping him off of him. Moving won’t work this time, as Golovkin is expected to stay close to Canelo to keep him from being able to avoid his shots. Canelo did a lot of moving to his left in the first fight to avoid being forced to brawl. If Canelo can’t get away from Golovkin in the second fight, then it’s going to be bad for him if he doesn’t have the punching power to win.

Canelo’s comment about Golovkin’s power being “nothing out of this world” would make more sense if he hadn’t spent the entire fight on the move trying to avoid GGG’s power shots. Canelo looked terrified of Golovkin, and it really spoiled the fight for the fans that saw it.

If Canelo truly believes that Golovkin’s power wasn’t that impressive, then he should have stood and fought him like a warrior instead of staying on the move for the entire fight. The way that Canelo was moving, he appeared to be afraid of GGG. If Golovkin can’t punch, then Canelo made a cardinal error by not standing his ground and beating him in the trenches. From the boxing fans’ perspective, Canelo’s movement gave the appearance that he was afraid of Golovkin and unwilling and/or unable to stand up to him in a dog fight. If there’s anything that Canelo needs to change in the rematch, it’s his aggression. Canelo won’t beat Golovkin by pretending he’s Floyd Mayweather Jr., because that style won’t work against a puncher like GGG. It might have worked with the set of judges that worked the previous fight, but those guys won’t be working the Canelo-GGG 2 rematch. Canelo will need to stand and fight a lot more often in the second fight with Golovkin. The judges aren’t going to want to be raked over the coals like the previous judges were for the first Canelo vs. Golovkin. Canelo can make things a lot of easier on himself and the judges if he shows more of a warrior spirit in the rematch and leaves his track shoes at home.

“My reflexes are quicker than his, so I could see punches [in the first fight]. But he has a lot of experience,” Canelo said about Golovkin. ”He landed some shots on me, but that’s due to his experience, and I could see punches as soon as he began to throw them. In the fifth round, I was hit with the kind of shot to knock someone out. It was between the ear and the neck, but I didn’t feel anything,” said Canelo.

What allowed Canelo to avoid getting in trouble against Golovkin were two things: A. Golovkin’s decision to stay on the outside all night, which allowed Canelo the ability to move away from him to escape his pressure. B. Canelo’s size and power. Canelo looked like he put on a lot of muscle weight during training camp for the Golovkin fight. Canelo went from the small-looking fighter he’d always been to a guy that had more size than GGG in the fight and that obviously helped him. In training for the rematch, Canelo appears to have leaned out a lot in taking off muscle weight in an effort to improve his poor stamina. 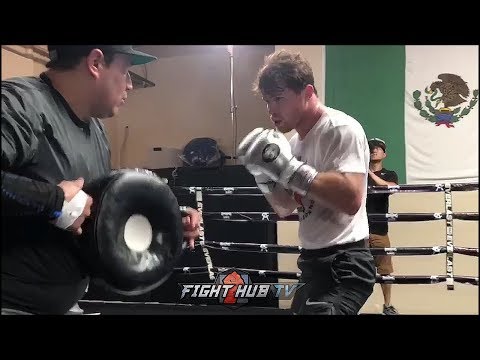 In an effort to improve his stamina for the rematch with Gennady, Canelo, 27, is running each morning. It’s unknown just how much running Canelo is doing, and how fast. It’s useless for Canelo to job if he’s moving slowly. The only way to build stamina is to job at as fast a pace as possible. The training footage that has been shown of Canelo jobbing in the past, he’s moving too slow for it to help his conditioning to any great extent. Canelo needs to move a lot faster and he needs to add 100 and 200 meter sprints to his regimen. Unfortunately for Canelo, he’s trained by old school trainers Eddy and Chepo Reynoso, who have been with him his entire career. Those two haven’t improved Canelo’s poor stamina in all these years, and it’s unlikely they’ll do much to improve his stamina for the rematch. They’ve done very little to help Canelo increase stamina during his 13-year pro career, so you can expect the same results in the cardio department for the red-haired star. It’ll be the same Canelo we’ve always seen. Canelo should have hired a good conditioning coach that can help him fix his stamina problems. It’s unclear whether Canelo will ever be able to fight hard for more than a minute without exhausting himself. Some people aren’t made to compete at a high level in sports that require a good cardiovascular system. Canelo does well when he has the size advantage over his opponents and he’s able to fight at a slow pace that allows him plenty of rest breaks.

The only question for the rematch is whether Golovkin will put enough pressure on Canelo to wear him down to score a stoppage. That should be the plan for Golovkin. He needs to take the judges out of the equation to make sure that he doesn’t wind up losing the fight for ending up with another draw, because Canelo is going to be the A-side once again.

“The last fight gave us the blueprint for this rematch,” Canelo said about Golovkin. ”We don’t necessarily have to change the strategy; we just have to add to what we did. We have to throw more punches in every round. We need to do that to remove any doubts about the victory. For that we will work on our conditioning. That’s what we needed a little more of in the first fight in order to be able to throw punches constantly in each round.”

Canelo must fight a lot differently in the rematch for him to beat GGG, because he’s not going to be able to move to his left unmolested like he was in the first fight. Golovkin isn’t going to let Canelo move on him without being trapped and forced to fight him. Throwing more punches will put Canelo in dangerous because he’ll need to stand and fight GGG more, and take shots. All it takes is Canelo red in the face from fatigue and he’ll wind up getting knocked out, because Golovkin isn’t going to allow him to take his constant rest breaks like he did last time.