Pacquiao calls on Mayweather to come out of retirement 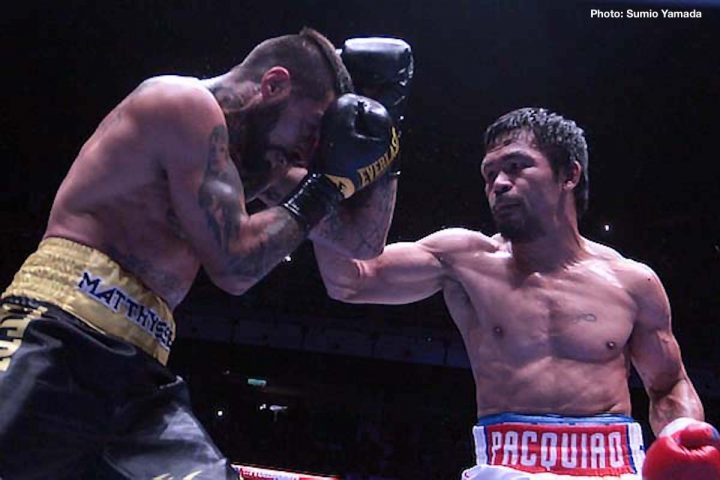 By Chris Williams: Fresh off his victory over Lucas Matthysse last Saturday, Manny Pacquiao is now calling for Floyd Mayweather Jr. to come out of retirement so that he can avenge his loss to him from three years ago. ”Let’s do a second one,” Pacquiao said to AFP about a rematch with Mayweather. Pacquiao will be fighting next in November or December.

If Mayweather is going to agree to fight Pacquiao in a rematch, he’s going to need to speak up soon so that they can start promoting the rematch. It doesn’t seem likely though that the fight will get made. Pacquiao is now the new WBA welterweight champion, but he’s holding the secondary WBA title, not the main one held by Keith Thurman.

Looking more muscular and vascular than usual, Pacquiao powered past Matthysse, scoring his first knockout in nine years since his stoppage win over Miguel Cotto in 2009. Judging by the muscles that Pacquiao was packing past Saturday, he’s been hitting the weights awfully hard in the last year since his loss to Jeff Horn in 2017. Pacquiao’s punching power was too much for Matthysse to take, as he was dropped several times in the fight before he decided to quit on a knee in the 7th.

Pacquiao lost a lopsided 12 round unanimous decision to Mayweather in 2015. After the fight, Pacquiao revealed that he had fought with a right shoulder injury. He later had surgery on his shoulder to fix the problem. Mayweather saw Pacquiao as a poor sport, unwilling to give him credit for having beaten him soundly. Many bettors were unhappy to hear that Pacquiao had fought with an injury, as they would have liked to have known about it ahead of time.

Mayweather (50-0, 27 KOs) is the fight that the 39-year-old Pacquiao (60-7-2, 38 KOs) wants now. Pacquiao’s other options for his next fight is Vasyl Lomachenko, Amir Khan and Terence Crawford. Pacquiao’s former promoter Bob Arum would love for him to face Lomachenko or Crawford, as he promotes both of them. Those are good payday matches for Pacquiao, but they’ll bring in nothing remotely close to the same kind of money that he can make in a rematch against Mayweather. Pacquiao made over $100 million for his fight against Mayweather in 2015. The money Pacquiao can make fighting Crawford or Lomachenko would likely be nowhere close to that.

Looking more muscular than usual, Pacquiao stopped WBA World welterweight champion Matthysse (39-5, 36 KOs) in the 7th round last Saturday night at the Axiata Arena in Kuala Lumpur in Malaysia. Pacquiao knocked the 35-year-old Matthysse down three times in the fight in flattening him in rounds 3, 5 and 7. The fight was stopped by the referee Kenny Bayless after Matthysse took a knee in the 7th.

“Mayweather? If he decides to go back to boxing then that is the time we are going to call the shots,” Pacquiao said via AFP after his win over Matthysse.

Pacquiao isn’t in the position to call the shots against Mayweather in negotiations. If Mayweather agrees to come out of retirement to face Pacquiao, he would still be the A-side in the fight. Pacquiao would likely need to agree to a 60-40 or worse purse split for him to get a rematch with Mayweather. With the money Mayweather made in his last fight against UFC star Conor McGregor in 2017, it’s unlikely he’ll be tempted to return to the ring to face Pacquiao. It’s a fight that there’s no demand for in the United States. Pacquiao’s popularity has dropped off dramatically since his loss to Mayweather, thanks in part to questionable match-making and a loss to Jeff Horn. To show how far Pacquiao’s popularity has dropped in the boxing world, his fight against Matthysse was shown on ESPN+ rather than on pay-per-view.

ESPN hasn’t released the numbers of boxing fans that watched the Pacquiao-Matthysse fight on ESPN+ last Saturday night, but it wouldn’t be surprising if it’s a low figure. The hardcore boxing fans that have the ESPN+ app likely took the time to watch the Pacquiao vs. Matthysse fight, but the casual fans probably didn’t bother to download the ESPN+ app so that they could stream it. The fight wasn’t well publicized in the U.S, and it wasn’t a big one. Moreover, Pacquiao’s star has faded since his loss to Mayweather. Pacquiao hasn’t faced the best opposition since that loss. His fights have come against Jeff Horn, Matthysse, Tim Bradley and Jessie Vargas. For Pacquiao to remain popular, he probably have would needed defeat the likes of Terence Crawford, Errol Spence Jr.,Keith Thurman, Shawn Porter and Danny Garcia.

“I have the belt, so it’s up to him. If he wants to come back in boxing let’s do a second one,” Pacquiao said.

Mayweather doesn’t need money, so it’s improbable that he’ll be lured back into the ring to face Pacquiao. Mayweather has said that his asking price for fights is $100 million+. If Mayweather holds to that figure, he would likely not be able to get that kind of money facing Pacquiao, who arguably isn’t popular enough at this point in his career for a rematch between the two aging fighters to make enough for Mayweather to get a $100 million payday.

For Mayweather to make that kind of money in boxing, he’ll need to risk getting knocked out by facing the winner of the September 15th fight between middleweight champion Gennady Golovkin and Saul Canelo Alvarez. Those two fighters are arguably the most popular guys in the sport in North America at this time. Pacquiao is a distant memory in the eyes of a lot of the casual boxing fans. He’s not active, and not fighting the best any longer. Pacquiao’s last four fights (Matthysse, Jeff Horn, Jessie Vargas and Tim Bradley) are a clear sign that he’s not facing the best any longer. Pacquiao will be turning 40-years-old this December, and while he’s still fast and powerful for an aging fighter, he’s not facing the better fighters to test himself. Choosing to fight Matthysse, who was considered a paper champion at welterweight, is a perfect example.

If Mayweather chooses to ignore Pacquiao, he options for the former eight division world champion are slim in terms of big money fights. WBA lightweight champion Lomachenko isn’t a PPV star. Pacquiao would need to drop down to 135 to face Lomachenko, as he reportedly won’t move past that weight in order to face him. That means Pacquiao would need to go down two weight classes to accommodate Lomachenko. That would put Pacquiao at a huge disadvantage because he hasn’t fought at lightweight in over 10 years.

Pacquiao vs. Crawford would be a decent money fight on ESPN, but it wouldn’t be a huge money fight. Crawford isn’t a star. He’s a good fighter, but he has failed to take his career to the next level. For Pacquiao to make really good money, he would need to move up to middleweight to face Canelo or Golovkin, because those are the only guys that he could make big money fighting. Either of those two would seem unlikely for Pacquiao to fight, as he’s interested in defending his newly won WBA 147 lb. crown against one of the contenders. Since Lomachenko wants Pacquiao to come down all the way to 135, he’s out of the picture for his next fight.

“My next fight, I want to defend my belt,” Pacquiao said.

#7 WBA Amir Khan is good possibility for Pacquiao to fight in November or December. Khan wants the fight, and he’s a safe choice.

Pacquiao must fight Lomachenko at 135 or not at all »