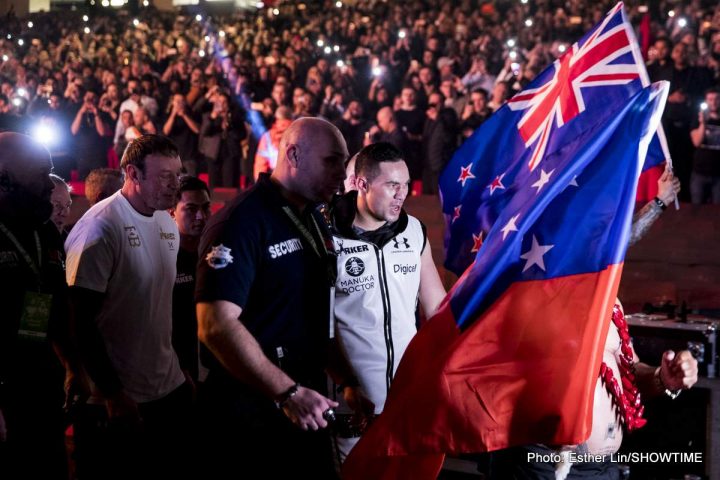 By Scott Gilfoid: Former heavyweight champion Joseph Parker’s promoters are reportedly appealing his 12 round unanimous decision loss last Saturday night to Dillian Whyte due to what appeared to be a blown call on the 2nd round knockdown of Parker at the O2 Arena in London, England.

It’ll be interesting to see if the appeal changes the outcome or if a rematch will be granted. It’s pretty clear that referee Ian John Lewis completely blew the call in giving Whyte credit for a knockdown from his clash of heads in round 2.

In a slow motion replay of the knockdown by the 30-year-old Whyte, his head slammed into Parker’s head, causing him to fall down. At the time of the knockdown, Parker looked like he was easily winning the round. Had the referee Ian John Lewis ruled it as a bogus knockdown caused by a head-butt, Parker likely would have won the round and the fight scored as a 12 round draw.

The head-butt seemed to cause Parker to lose all of his momentum in the fight. So instead of Parker continuing to dominate like he’d done in round one and up until the head-butt knockdown in round two, the pro-Whyte crowd helped him get motivated and take over the middle rounds. After the boned jarring head-butt knockdown, Parker looked stunned for the next four rounds. It wasn’t until the championship rounds in the 10th 11th and 12th that Parker came on and took over the fight. In round 12, Parker knocked Whyte down and had him looking ready to be stopped as the fight ended.

More importantly than the mistake the referee Ian John Lewis made in ruling the head-butt in round two as a knockdown, is all the fouling that Whyte was allowed to get away with in the fight. Whyte, 30, got away with roughing up Parker the entire fight. The fouling seemed blantant at times, especially when it came to the rabbit punches that Whyte was throwing. The referee should have stepped in and taken at least one or two points off from Whyte for the fouling, as it changed the complexion of the fight. In hindsight, if Whyte had been docked two or three points, he would have lost the fight. Even if the referee had taken just one point off, the fight would have been scored a draw. You can argue strongly that the culmination of the referee blowing the 2nd round head-butt knockdown of Parker and the fouling that Whyte was allowed to get away with led to Parker losing the fight.

Had the referee done a better job working the fight, Parker would have won the fight in my opinion. The home fighter Whyte won the contest, but he arguably didn’t deserve it. In the best possible world, the Whyte-Parker fight will be ruled a no contest due to the head-butt that caused the 2nd round knockdown, but I don’t think that’s going to happen. I think it’s likely that Parker is going to need to move on and live with another loss on his record. For Parker, this is the second time in a row that he’s had a bad experience fighting in the UK. In Parker’s previous fight against heavyweight champion Anthony Joshua on March 31, the referee was having none of the two fighters fighting on the inside. The referee’s decision not to allow inside fighting impacted the shorter fighter Parker’s ability to compete because he couldn’t get close enough to Joshua to land his shots.