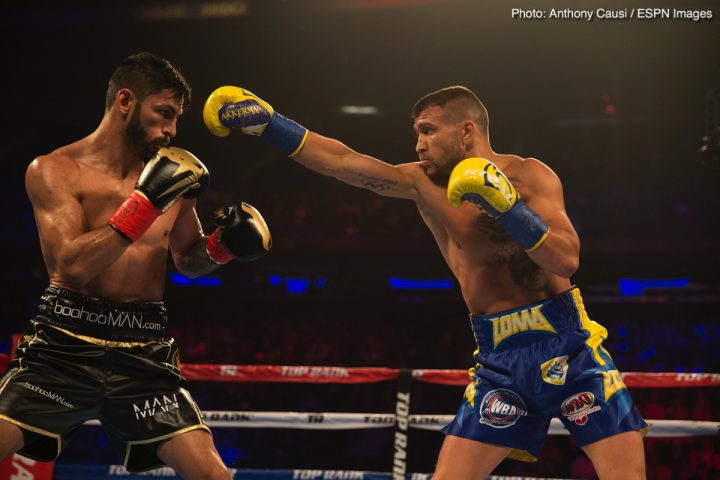 By Chris Williams: WBA lightweight champion Vasyl Lomachenko says he’s not interested in fighting WBC champion Mikey Garcia when he returns from his shoulder injury to fight on December 8 on ESPN.

Lomachenko (11-1, 9 KOs) says he wants an easy fight for when he comes back, and he feels a unification fight against WBO lightweight champion Ray Beltran is just the type of fight that he needs in coming off of a shoulder problem. Lomachenko, 30, thinks that Garcia would be a lot tougher fight than Beltran.

Lomachenko’s promoter Bob Arum of Top Rank is probably going to be very happy to hear the news of him preferring to fight the 36-year-old Beltran (35-7-1, 21 KOs), because that’s the fight that he wants to make. Lomachenko isn’t resisting that idea, yet at the same time he says he wants to be a pay-per-view fighter. What Lomachenko doesn’t quite understand is the U.S boxing public aren’t interested in paying to see dull mismatches against fighters that have no fans base. To become a PPV star, you need to take on the best and not take easy fights, which Lomanchenko has been doing plenty of lately.

“Hopefully, I’ll be back in the ring in December,” Lomachenko said to the LA Times Facebook. “I felt the pain in the fight. I think it would be stupid for me to step out right away and fight Mikey. Of course, I would like to fight somebody like Beltran. I think to fight Beltran would be easier than to fight Mikey. Yes, I’m interested in fighting Mikey Garcia. The fights going to happen,” Lomachenko said about the Garcia fight.

Lomachenko is concerned with taking a hard fight against Mikey Garcia after a shoulder injury. However, if he’s going to fight Beltran, then he might as well take the fight with Mikey. Both guys are world champions at 135. Lomachenko has taking his time in moving up to lightweight to face Mikey, and now that he’s finally competing at lightweight, he wants to take more time.

“You can’t relax inside the fight. I knew that before, but I forgot in this fight,” Lomachenko said in explaining why he was knocked down by Jorge Linares. “It’s a good thing I didn’t leave it in the judges’ hands. “

Lomachenko’s knockdown was a result of his bad habit of walking forward to try and get in close to his opponents to hit them with his rapid fire pitty-pat shots. Lomachenko has gotten away with that fighting style due to the weak opposition that he’s been fighting. When Lomachenko tried to do that against a good fighter for a change against Linares, he was nailed by a right hand and dropped. That told you that Lomachenko had developed bad habits from all his fights against guys like Miguel Marriaga, Jason Sosa, Guillermo Rigondeaux and Nicholas Walters.

Lomachenko wants his December 8 fight to be pay-per-view against Ray Beltran, and the problem with that is the fight isn’t PPV worthy. Lomachenko arguably isn’t anywhere near as popular as middleweight champion Gennady Golovkin, and he’s not a PPV attraction unless he’s fighting Saul Canelo Alvarez. Golovkin needs to be facing a big star for him to sell his fights. His fight with Danny Jacobs didn’t do well on HBO PPV. I don’t believe Lomachenko can fight on PPV without someone like Mikey Garcia.

Lomachenko needs a big name, and Beltran doesn’t fit that category. If Lomachenko’s promoter Bob Arum tries to make him into a PPV fighter right now, it’s likely to end in disaster. If all of Lomachenko’s fights are going to be on PPV like all Saul Alvarez’s fights are, I think the buys will be minimal and it’ll likely hurt his popularity because a lot of casual boxing fans won’t get a chance to see him fight.

The fans aren’t going to want to pay to see Lomachenko in huge numbers, and the fans that don’t buy his fights won’t see him at all. It takes a long time to turn a fighter into a pay-per-view attraction. Look at Floyd Mayweather Jr. He didn’t turn into a PPV star until 2007 after he’d been fighting as a pro for 11 years. Lomachenko has only been a pro for 5 years. That’s not long enough to become a PPV star.

Lomachenko needs more time, and he needs to move up to at least 140. The lightweight division isn’t a popular one with the casual boxing fans. The hardcore fans like Mikey Garcia, but the 135lb weight class doesn’t have a large following like at welterweight, middleweight and heavyweight. Those three classes appear to be the most popular with the boxing fans. Lightweight and anything below that division doesn’t register highly with the casual fans. Lomachenko isn’t going to be able to sell his fights on PPV.

It would be better for Lomachenko to do these things if he wants to become a PPV star:

“We were already talking about August 25 to be on pay-per-view,” Lomachenko’s manager Egis Klimis said. “I think if we put everything together with the promoter, I think his next fight will be on pay-per-view.”

Klimis can put Lomachenko’s fight against Beltran on PPV if he wants, but I think it’ll be a tremendous fail if he does. This isn’t a situation where if you build it, they will come. Boxing is different from ‘The Field of Dreams.’ In boxing you have to actually fight someone good to bring in PPV buys, and when I say someone good, I’m talking about a fighter with a large following. Ray Beltran does not have a large following, and no matter how much promotional work Arum does in trying to sell the Lomachenko-Beltran fight, it’s not going to interest boxing fans in view. I don’t see fans wanting to pay to see a mismatch between Lomachenko and Beltran.