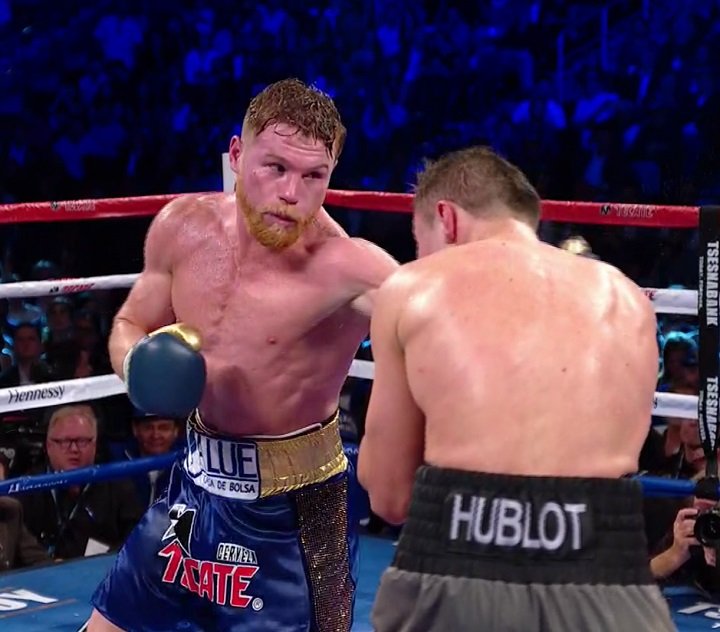 The fight was ruled a 12 round draw, even though Canelo looked like he came up short by four rounds. Loeffler and Golovkin don’t know how the clenbuterol got in Canelo’s system last February when he was popped twice during testing, but they feel that the rematch will answer a lot of questions.

Loeffler points out that Canelo’s physique looked different for the GGG fight, as well as his fight against former WBC middleweight champion Julio Cesar Chavez Jr. last year in May 2017.

“Gennady still has respect for Canelo’s skills, but in his minds he has the question, ‘was it natural the first fight?’ His physique looked different, even in the Chavez fight, it looked different. So those are the questions in Gennady’s mind and that’s what Canelo has to prove,” Loeffler said to Under the Hand Wraps.

With all the testing that will be done by VADA for both fighters in the next three months, there won’t be any questions about whether Canelo is clean or not in the second fight on September 15. VADA will be testing randomly, so there shouldn’t be any issues. The only real question is whether the judging will be up to the mark for the rematch. The last fight it appeared that two of the judges were watching a different fight than the one that took place inside the ring. A lopsided score of 118-110 was turned in by one of the judges in favor of Canelo. A second judge scored the fight a draw a 114-114. The fight did not look to be a draw. It looked like Canelo was gassed out from round 3 to 12. Although Canelo did put in a little more effort in rounds 10, 11 and 12, he was only able to fight hard in the first 45 seconds of those rounds. He would empty his tank after the first 45 seconds and then spend the remainder of the rounds either running or leaning against the ropes to help rest his weary legs.

”It’s not just about the image going back to the last fight,” Loeffler said. ”Canelo isn’t going to lose money on this fight. This is going to be his biggest payday. The last fight was definitely was his biggest payday of his career, and now he’s still getting the majority of the split and now with the VADA testing, not just when the contracts are signed, the entire time, we’ll know both of these guys are clean, and we’ll see how they perform,” Loeffler said.

The purse split for the fight still hasn’t been revealed to the boxing public, but it’s believed that it’s 55-45 in Canelo’s favor. Loeffler says GGG stuck to his guns in what he was asking for in the negotiations. It’s known that Golovkin wanted 45 percent of the purse after coming down from 50 percent. It’s unlikely that he agreed to the 42.5 percent that Golden Boy had given for their counter offer, since he wanted near parity due to him being the world champion and having lost out on a big payday on May 5th after Canelo backed out of the fight.

”Strategically you can definitely say that there was a reason why when Canelo was the WBC champion, he was the only champion from Mexico to ever vacate the WBC title, and there’s a reason for that,” Loeffler said. ”They didn’t feel confident he could beat Triple G. It didn’t have nothing to

do with the purse bid or split or anything like that,” Loeffler said.

It looked to many boxing fans that Canelo chose to vacate his WBC middleweight title in 2016 because he didn’t feel confident enough to defend it against Golovkin, who was knocking out everybody at the time and looking invincible. Canelo vacated his WBC middleweight belt after defending it against welterweight Amir Khan. Right away, Golovkin was then elevated to the WBC 160 lb. champion by the World Boxing Council. It wasn’t until two years later that Canelo finally fought GGG after he turned 35-years-old. A lot of boxing fans believed that Canelo waited until Golovkin got older and was coming off of two consecutive less than stellar performances against Kell Brook and Daniel Jacobs before he finally decided to face him.

”We would have been even more accommodating to get that fight back then because it would have been that much earlier – that Triple G would have gotten one of the big fights that he’s always been looking for in his career,” Loeffler said. ”Really the excuse that the WBC gave him a deadline – that was just nonsense. We had an agreement where I signed and Eric Gomez signed it. The WBC signed it, saying that Triple G would allow Canelo to fight Amir Khan in order to build up the fight, because that would have been the first title defense as the middleweight champion and that would have built up the fight going into the Triple G fight, so all the other excuses didn’t make any sense. Quite frankly, they didn’t feel confident; Canelo didn’t feel confident that he could beat Triple G at that time. They vacated the title, and took about a year and a half, two years later. You have to give them credit at that time, because there was no obligation to fight Triple G. But they did drive a hard bargain and that was when we agreed to the 30 percent for Triple G originally, because they said if Canelo is going to get in the ring, he’s going to want to be paid a lot of money. He made the most amount of money in his career. He made four times fighting Triple G than he did fighting Floyd Mayweather,” Loeffler said.

If it was Canelo and Golden Boy’s idea to wait until Golokin was older before putting the fight together, it still didn’t work in their favor, because he still fought well enough to win the fight. Golovkin fought in a conservative manner and didn’t push for a knockout like he’d done in all of his fights up until 2017. GGG boxed Canelo like he’d done against Daniel Jacobs in 2017. Golovkin out-boxed Canelo for 12 rounds, but he wasn’t given the victory by the set of judges. That’s the main reason why Golovkin is going to be looking to KO Canelo in the rematch, because he doesn’t want the judges to take away his victory again.

”When Canelo first tested positive for clenbuterol, and that was big news. Canelo tested positive,” Hearn said. ”When we had the media day at big bear, Gennady reacted aggressively and called Canelo out, saying, ‘Look, he’s disrespecting the sport.’ He doesn’t think it was from Mexican meat. He doesn’t buy the excuse. If you go to Europe, UK or Germany or if you go to Russia or Kazakhstan, one of those two countries and say, ‘He ate Mexican beef and tested positive,’ they start laughing at you. It doesn’t make sense to them,” Loeffler said.

The tainted beef excuse by Canelo hasn’t gone over too well with the boxing fans. Many of them see it as a useless excuse that makes him look not only like a dirty fighter, but also one that is less than forthcoming about his mistake. Fighters that test positive always take a huge hit in popularity, and it’s hard to excuse away the tests. If Canelo did eat tainted beef, he should have known better than to take the risk of eating untested meat in Mexico.

”This fight, we don’t need the promotional tour,” Loeffler said.” Everyone knows the background, everyone knows what happened with Canelo. We’ll do everything on our part.”