Carl Frampton vs. Luke Jackson on August 18 at Windsor Park 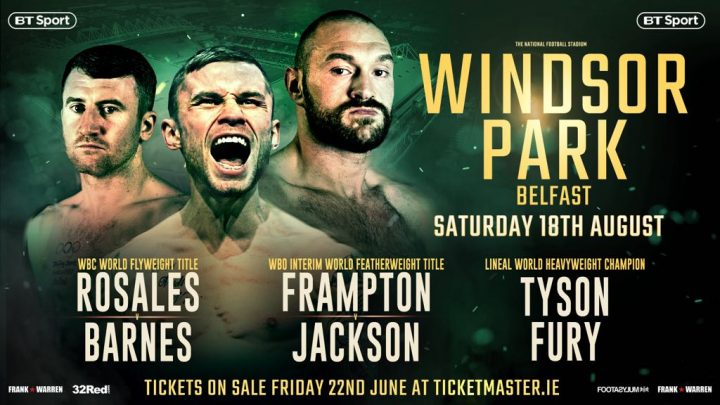 I can’t say I’ve ever heard of Luke Jackson before. He’s made no mark on boxing as of yet due the lackluster opposition he’s faced during his career. Fighting a no name like Luke Jackson at Windsor Park seems a bit out of place. Frampton might as well give Horacio Garcia a rematch rather than taking several steps down in competition in defending against a fighter with an inflated resume like Jackson.

Frampton is being put in the position where he can shine against a weak opponent. The thing is, Frampton is still going to be over his head when he faces WBO featherweight champion Oscar Valdez. I mean, Frampton might as well face the best opposition he can because if he can’t cut the mustard against top level opposition, then he has no business fighting Oscar Valdez.

If everything goes right for the 31-year-old Frampton, he could face World Boxing Organization featherweight champion Oscar Valdez in his next fight after that provided that the Mexican fighter’s broken jaw is 100 percent.

Frampton is coming off of a 12 round unanimous decision last April. That fight turned out to be a step down for Frampton from his previous contest against the 27-year-old Horacio Garcia last November. That fight looked like it should have been a draw or a victory for the Mexican fighter Garcia, as he knocked Frampton down in the 7th and dominated the second half of the contest. Frampton looked dreadful, like a shot fighter through the entire 10 round fight. All I can say is he was lucky that it wasn’t a 12 round fight because he would have surely lost.

“Jackson is an undefeated fighter and former Olympian with a very decent pedigree. He comes with a lot to gain if he beats me. He’s highly ranked with the WBO and I expect a tough fight,” Frampton said via skysports.com.

Jackson, 33, fought in the 2012 Olympics for Australia, but he was eliminated in his first contest in losing to Quiang Liu (China) by a 20-7 score. Jeff Horn also fought in the Olympics for Australia, and he looked horrible in losing to Terence Crawford recently. In other words, fighting in the Olympics doesn’t make you a world beater unfortunately. It depends on which country has an excellent amateur program. Countries like Russia, Cuba and the U.S often have amateurs that are able to find success at the pro level after they compete in the Olympics. With Australia, it’s not necessarily the case.

Jackson has been a pro since 2013, but he’s been facing poor opposition in Australia. As such, it’s hard to know how good Jackson is. We know that he was blown out in the 2012 Olympics by Liu from China in the first round, but as a pro, Jackson has been matched against exclusively C level opposition by his management, and that makes you wonder how good – or not so good – he is. For example, in Jackson’s recent fights, he’s fought these fighters: Surachet Tongmala (8-8), Silvester Lopez (27-12-2), John Mark Apolinario (18-7-3) and Thongchai Kunram (6-6). Jackson has not been matched against good fighters, and it makes you wonder why the World Boxing Organization has him ranked No.5 with their organization. With the type of opposition Jackson has fought as a pro, he belongs more in the bottom 100 than in the top 5.

“Jackson has had plenty of notice to get himself into the best shape of his life and he’s entitled to put on a great performance. It’s up to me to better his performance and that’s what I’m going to do – Windsor Park deserves it. I want to do a proper job,” Frampton said.

When you hear Frampton smothering his opponents with compliments from head to foot, it sends out alarm messages to me, making me highly suspicious. Frampton being complimentary of Jackson is an alarm signal that this is the same type of mismatch as his last opponent Donaire. No, I take that back. This is a far worse mismatch than Frampton’s fight against former four division world champion Donaire. At least with Donaire, he was at one time one of the best fighters in boxing. In the case of the 33-year-old Jackson, he’s a never was type of fighter, and it’s troubling that Frampton is facing him instead of a quality opponent.

When Frampton signed with Queensbury, I expected him to be fighting the best guys in the featherweight division. Instead of doing that, we’ve seen Frampton face an over-the-hill Donaire, Horace Garcia and now he’s about to fight a guy with an inflated record/ranking in Luke Jackson. It’s kind of disappointing to say the least.

The 29-year-old Fury (26-0, 19 KOs), fresh off his 4th round knockout win over the tiny 5’9” former cruiserweight Sefer Sefeir on June 9, will be facing an opponent still to be determined on the card. Fury fought for the first time in 2 ½ years in stopping Seferi at the Manchester Arena in Manchester, England. Fury’s performance was underwhelming to say the least. Personally, I thought Fury looked absolutely awful, but there were a handful of boxing fans who were pleased with the way he fought Seferi. All I can say is Fury was lucky he wasn’t fighting Tony Bellew, for he would have had his backside handed to him on a silver platter if he’d taken that fight in his comeback match. Fury is expected to take on another soft job like his last opponent Seferi. Fury weighed a flabby 276lbs for his fight against Seferi. Normally, you would think that Fury would be able to put a serious dent on the 30 pounds of excess fat that he’s carrying around, but given his history of celebrating with loads of food after his fights, it’s unlikely he’ll lose any of the excess weight he’s still carrying around on his 6’9” frame. If anything, Fury might be even heavier if he celebrates too much.