De La Hoya: GGG needs to come down from 50-50 for Canelo fight to be made 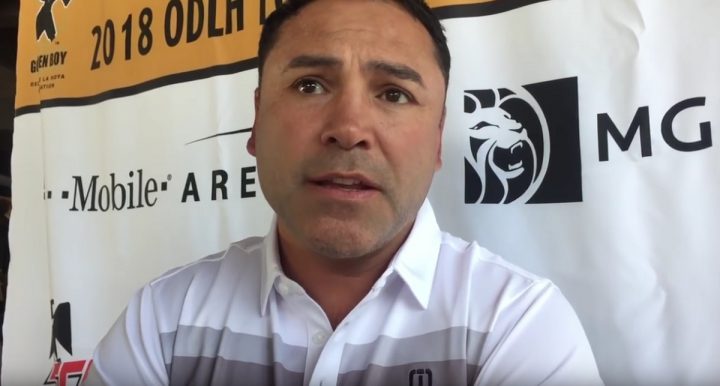 By Dan Ambrose: Oscar De La Hoya says Gennady Golovkin can easily make the fight with Saul Canelo Alvarez if he’s willing to come down from the 50-50 revenue split that he’s asking for to make the September 15 rematch take place. De La Hoya says Canelo has told him that he’s thought of moving up to 168.

Just what a fighter as short as the 5’8” Canelo will do at super middleweight is unclear, as there aren’t a lot of easy marks like Julio Cesar Chavez Jr. Canelo is short enough as it is at 160, but if you put him in the super middleweight division, he’s going to be dwarfed by the 6’2” guys like David Benavidez and Gilberto ‘Zurdo’ Ramirez.

De La Hoya isn’t saying how much GGG will need to come down from his asking price to make the fight, but it wouldn’t be surprising if it’s the same 65-35 split that Golden Boy were willing to get his management to agree to for last September.

Golovkin doesn’t want to move down in his asking price because he’s lost a TON of money in dealing with Golden Boy Canelo. Golovkin, 36, has made a lot of money, the 70-30 split that his promoter agreed to for the first fight was grossly lopsided in Canelo’s favor. Golovkin lost a ton of money with that 70-30 split, and then he lost additional money when he couldn’t fight in December 2017 because Golden Boy wanted him to wait until May 5. Canelo didn’t want to fight in December because he felt he needed a good long rest. Unfortunately, that long rest for Canelo affected Golovkin because he missed out on a December fight that he normally would take. The controversial draw the fight last September also cost GGG a lot of money.

“We will fight in September. Canelo is fighting in September,” De La Hoya said on Monday. “I think it’s just a matter of Eric Gomez sitting down and making it happen [with Golovkin’s promoter Tom Loeffler]. I strongly feel if they can move from 50-50, then obviously this fight can be made. We’re not being greedy at all. We’re being very fair. As long as they can move from 50-50, this fight can easily be made,” De La Hoya said.

If Golovkin doesn’t move down from the 50-50 to take the lesser money – again – that Golden Boy wants him to agree, then Canelo and De La Hoya are going to need to look elsewhere unless they’re willing to agree to a 50-50 split.

De La Hoya says he strongly feels the Canelo-GGG fight can get made if Golovkin moves down from 50-50, but you can say the fight could easily be made if Canelo come down from the 65 percent split that he wants to meet Golovkin at 50 percent. Asking for 65-35 after getting a 70-30 split is arguably an insult to Team Golovkin, because that’s a purse split that you would see with a non-popular fighter with no fans base.

“You have Danny Jacobs and [Billy Joe] Saunders,” De La Hoya said about backup options for Canelo to fight in September. “Those are the top two guys. You’ve got [Gary] O’Sullivan. You’ve got other guys as well. Canelo has even thought of moving up to 168. There are a lot of options. Canelo wants to fight the best. He’s even willing to go up to 168, whatever it takes. So if they can move from 50-50, just by a little, then we can make it happen,” De La Hoya said.

If Canelo and Golden Boy aren’t going to compromise with GGG and agree to the 50-50 split that he’s asking, then they’re going to need to start considering their options for September. Danny Jacobs would be a great Plan-B for Canelo, because it would show the boxing fans that he’s for real at 160 and not just looking for an easy win. If Golden Boy selects Gary ‘Spike’ O’Sullivan, it’s going to upset a lot of boxing fans because there’s no public demand for that fight. Even from UK boxing fans, they’re not asking Canelo to fight O’Sullivan. That’s a guy that Golden Boy signed to their promotional company, and obviously they’re going to want to use him at some point for Canelo to fight. It’s just the timing for a fight between Canelo and O’Sullivan is bad right now due to the controversy surrounding Alvarez’s last fight against GGG. Canelo needs to show that he’s not a pampered fighter, who the judges favor, and who is mostly fed weak opposition instead of the best. If Canelo can fight Jacobs, he can show that he’s not afraid to fight one of the best, and he would give the fight fans a chance to see the difference between him and Golovkin against a common opponent. Jermall Charlo would be even better than Jacobs, but for some reason De La Hoya didn’t mention his name.

“It depends on what the injury is,” De La Hoya said when asked if Canelo would consider fighting Saunders in September. ”If he can be ready for September, but Saunders is definitely one to look at because he is one of the top guys and that’s what Canelo wants it to fight the best,” De La Hoya said.

WBO middleweight champion Billy Joe Saunders is probably the least likely guy to get a fight against Canelo, because he’s got a tricky defensive style, and he’s not easy to negotiate with. On top of that, Saunders has injury problem. He gets hurt a lot and tends to postpone a lot of his fights. In the two years that Saunders has been the World Boxing Organization middleweight champion, he’s pulled out of two fights and postponed two. It’s a bad track record for a fighter that has only been a champion for a brief period of time. If Canelo is willing to deal with Saunders potentially postponing their fight once or twice, then he should possibly use him as the backup opponent for September if he can’t get the fight with GGG, but I think he’ll ultimately be sorry he did so for one reason or another.

Boxing » Canelo Alvarez » De La Hoya: GGG needs to come down from 50-50 for Canelo fight to be made