Kell Brook to fight in July, and Jarrett Hurd could come next 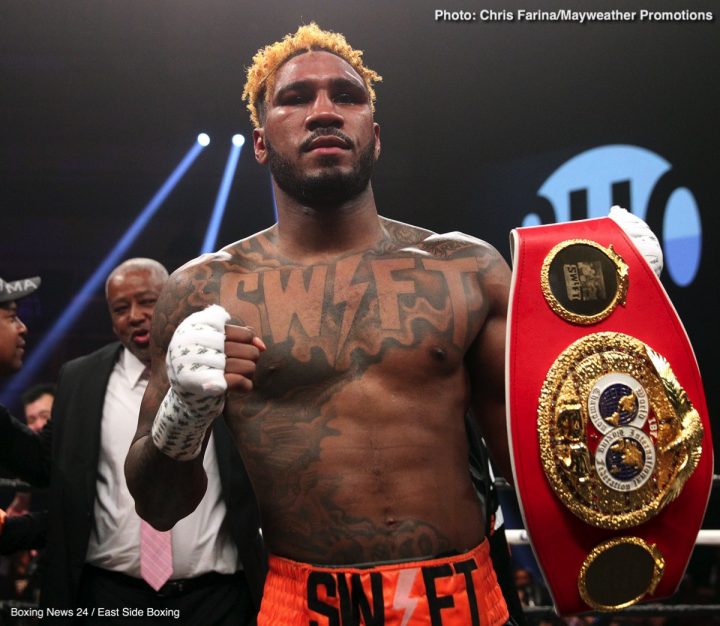 By Scott Gilfoid: Eddie Hearn says Kell Brook will be fighting next in July, and then after that he could be challenging unbeaten IBF/WBA junior middleweight champion Jarrett Hurd for his two titles. Brook (37-2, 26 KOs) likes his chances of beating the 27-year-old Hurd (22-0, 15 KOs), who recently defeated Erislandy Lara by an exciting 12 round split decision last April to claim the WBA Super World junior middleweight title.

For Brook to gain more respect from the boxing public, he needs to fight Hurd rather than Amir Khan. Brook-Khan is basically a domestic level grudge match at best. Khan isn’t a world champion and he’s not going to be one.

Khan’s time as a world champion is long past in the rearview mirror, and it’s not coming back around. Hurd is a unified world champion at 154 and arguably the best fighter in the division today. If Brook fights Hurd, he gains a massive amount of respect from the boxing public. It would be like Brook fighting Gennady Golovkin again. Even if Brook loses, he still gains respect from the fans for showing the courage to face Hurd.

Brook, 32, will be making his second appearance at junior middleweight when he fights next. Brook moved up in weight to 154 last March in defeating Sergey Rabchenko by a 2nd round knockout in Sheffield, England. It was a good performance by Brook, but his opponent Rabchenko didn’t offer much resistance. He was another version of Phil Lo Greco, perhaps a tad bit faster and stronger, but basically the same type of slow, beatable fighter as him. Amir Khan knocked out Lo Greco in the 1st round in his comeback fight on April 21 in Liverpool, England. Khan is the guy that Brook has his fights on fighting as soon as he can. It’s up to Khan when he wants to make the fight, and right now he’s not quite ready.

”Of course Amir is the big focus but I was interested to see Jarrett Hurd’s comments and that’s a fight we would definitely be interested in,” Hearn said to skysports.com.

Well, don’t be surprised if Hearn makes a play to sign Jarrett Hurd to his Machroom Boxing USA stable. Hearn needs as many top Americans as possible, and signing Hurd would give him one of the best at 154 and a future top middleweight cog. A lot of boxing fans would favor Hurd to wear down and stop Hearn fighter Daniel Jacobs, who he raves about and says is the best fighter in the 160lb weight class.

As far as Brook goes, I think it would be a mismatch between him and Hurd. Brook doesn’t have the size or enough punching power to beat a guy like Hurd. He would likely walk Brook down, break him down an stop him in the way Gennady Golovkin did in his 5th round TKO victory over the ‘Special One’ in 2016.

“Kell will be boxing in July and then after that we are looking for the big one,” Hearn said.
Brook’s opponent for July is supposed to be a step up in class from the Rabchenko fight, according to Hearn.

We’re probably looking at Hearn matching Brook against one of these junior middleweights in July:

Those are all fringe contenders at 154 that Brook should be able to beat. If he can’t beat them, then it’s game over for him. Brook will take the Khan fight and then get out of the game. He’s got to be able to beat the bottom feeder level junior middleweights for him to have any chance of going anywhere in the 154lb division. Hearn can’t feed Brook a guy worse than his last opponent Rabchenko, because the boxing fans will see through what he’s doing and lose interest in an eventual Khan-Brook fight. For the fans to say interested in Brook’s career, he needs to fight the best and prove that he can compete against them. Thus far, Brook hasn’t proven that he can mix it at the highest levels of the 154lb. weight class. We could find out in July if Brook and Hearn were willing to take on a talent like Hurd.

Brook vs. Hurd has fight of the year written all over it. Brook vs. Khan would be a mismatch. Khan can’t take a punch, and he would be totally out-sized by the bigger, stronger Brook. It’s the much better fight for Brook to take than the Khan match, as far as achievement.