By Charles Brun: Kell Brook’s promoter Ben Shalom wants Amir Khan to prove himself by beating someone before he’s potentially given a rematch.

Khan (34-6, 21 KOs) looked horrendously bad last month in getting battered & beaten in a hard-to-watch sixth-round slaughter at the manchester Arena in Manchester, England on February 19th.

A rematch only makes sense if Khan beats someone credible to show that he’s got something left in the tank. It would be a bad idea if Khan faces an obscure fighter to prove himself because he’s not going to convince the boxing public that it’s worthwhile to purchase another Brook-Khan fight on PPV.

At this point, Khan would probably lose to the likes of Blair Cobbs, and that’s sad. Cobbs would be a fun little test to see what Khan has left. In a fight like that, Cobbs would do all the heavy lifting in terms of promoting the affair with his trash-talking, and get a lot of boxing fans interested worldwide.

Shalom isn’t saying who he would like for Khan to fight to prove himself. If the idea is for Khan just to win period regardless of who he beats, it should be easy. He’s still capable of beating second and third-tier opposition, but definitely not any of the contenders.

Shalom should at least make it somewhat tough for Khan to earn the Brook rematch by insisting he beat one of these top tier fighters:

If Khan can’t beat at least one or two of those fighters, it’s pointless for Brook to fight him again because he’ll lose just as badly in the rematch as he did last February.

It could hurt future boxing events if Brook does fight Khan again because the fans that purchase the mismatch will feel ripped off – again – and many of them will likely never purchase a card again.

That is to say, you burn your bridges with those fans by selling another Brook-Khan fight to them, which has no sporting value. Their fight last month was about as sporting as watching a YouTuber contest.

British fans will probably still want to watch Brook and Khan do it again, but it’s not a fight that would resonate outside of the UK. Both guys are viewed as a couple of faded former one-hit wonders, who haven’t beaten notable opposition in ages.

For example, Brook’s last – and only – credible win on his resume is a 12 round majority decision win over Shawn Porter in 2014.

Brook used the old punch & grab technique of throwing single shots at Porter, and then crashing forward to tie him up immediately in a clinch to prevent him from firing back. It wasn’t much of a win, but it’s the best one by a mile on Brook’s 18-year resume.

“He will fight again, he wants to fight again. I think he has understood why it might be a tough sell to go straight back into a Kell Brook fight.”

“I believe him that he was injured [in Kell fight last Febuary]. I do believe that there were some issues with the camp and he only had 10 weeks,” Shalom said.

If Sky is willing to put the Brook vs. Khan 2 fight on PPV, it’s up to the fans if they want to watch it again.

“Everybody thought that should be his last fight, but if he wants to fight, he’s still a good fighter, we’ll see how hungry he is to continue,” said Eddie Hearn to the Lightweight Boxing Show about Khan. 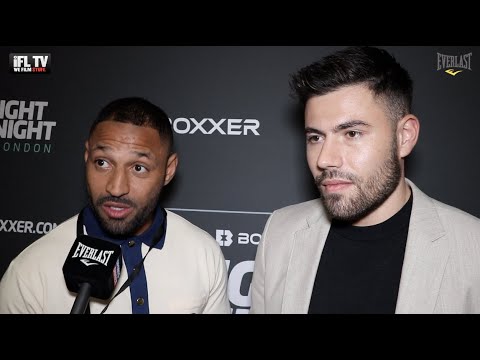