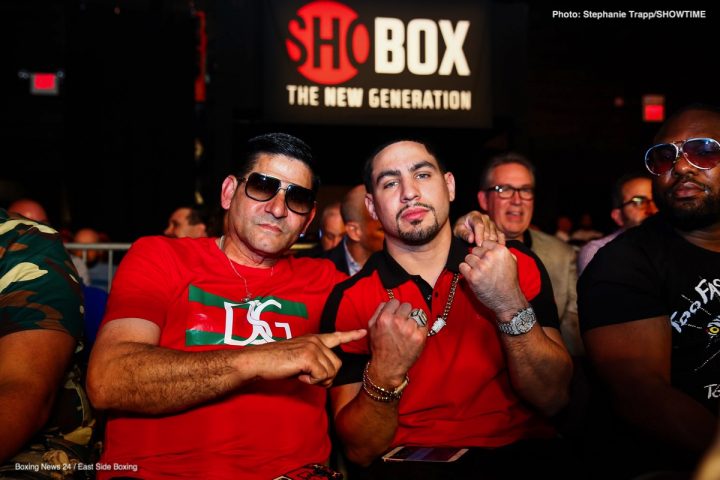 The date for the fight still isn’t official, but that’s when the two will likely be facing each other. Both fighters are with Al Haymon, so it was always expected that a deal would be worked out between them.

Garcia and the 30-year-old Porter will be fighting for the recently vacated World Boxing Council welterweight title. This is the belt that was held previously by Keith ‘One Time’ Thurman, who gave it up after sitting on it for over 12 months without ever defending it. Thurman has been chronically injured for well over a year now, and it’s believed by some boxing fans that his WBA title will be soon stripped from him for inactivity.

Porter has a very good chance of beating Garcia if he can neutralize his punching power and stay on top of him for 12 rounds. Garcia is coming off a 9th round TKO of Brandon Rios on February 17, and that was not an easy fight for him. Rios was hitting Garcia with a lot of shots in the fight. While Rios did end up getting knocked out from a hard right hand from Garcia in round 9, he inflicted a lot of punishment along the way. If Porter can land as often as Rios did, he’ll have a good chance of beating Garcia, who struggles against pressure fighters.

Lamont Peterson gave Garcia a great deal of problems in their fight in April 2015. Garcia beat Peterson by a 12 round majority decision, but the outcome might have been different if Lamont had started pressuring him earlier in the fight in the first half. If Porter can take Garcia’s power and deal with his likely clinching, he’ll have a good shot at winning this fight. Garcia is tricky though. Against Lucas Matthysse, he hit him with a lot of low blows that slowed him down enough for him to win a decision.

Danny Garcia previously held the WBC welterweight title from January 2016 to March 4, 2017. Garcia won the title in defeating Robert ‘The Ghost’ Guerrero by a 12 round unanimous decision on January 23, 2016. Garcia never got around to defending it against a contender unfortunately. Instead of defending it, Garcia fought fringe contender Samuel Garcia in a stay busy fight in November 2016 in stopping him in the 7th. Last year, Garcia fought WBA 147lb champion Thurman in a unification fight and promptly lost to him by a 12 round split decision in March 2017.

Porter has won his last two fights against Adrian Granados and Andre Berto. The fight against Berto was a WBC title eliminator. Porter won the IBF welterweight title in beating Devon Alexander by a 12 round unanimous decision in December2013. Porter successfully defended the IBF strap once, beating Paulie Malignaggi by a 4th round knockout in April 2014. In Porter’s second defense, he was beaten by Kell Brook by a 12 round majority decision in August 2014. It was a controversial decision, as Brook spent most of the fight holding Porter and not letting him throw punches.

The referee was fine with the way Brook was fighting, and he chose not to take points away from him. It looked like Brooks’ game plan was to hold Porter frequently to keep him from throwing punches. After Porter’s loss to Brook, he defeated Erick Bone and Adrien Broner before losing to Thurman by a 12 round unanimous decision in June 2016.

The date of the Garcia-Porter fight, August 25, conflicts with Top Rank fighter Vasyl Lomachenko, who will also be fighting on the same date on ESPN against WBO lightweight champion Ray Beltran in a unification fight. Lomachenko will have his recently won WBA lightweight title on the line in the fight. Lomanchenko won the belt in defeating Jorge Linares this month. Having Garcia and Porter fight on the same date as Lomanchenko and Beltran will make it necessary for the boxing fans to pick which of the two fight they want to see. Garcia vs. Porter is a far more competitive fight on paper than Lomachenko-Beltran, which figures to be a mismatch.