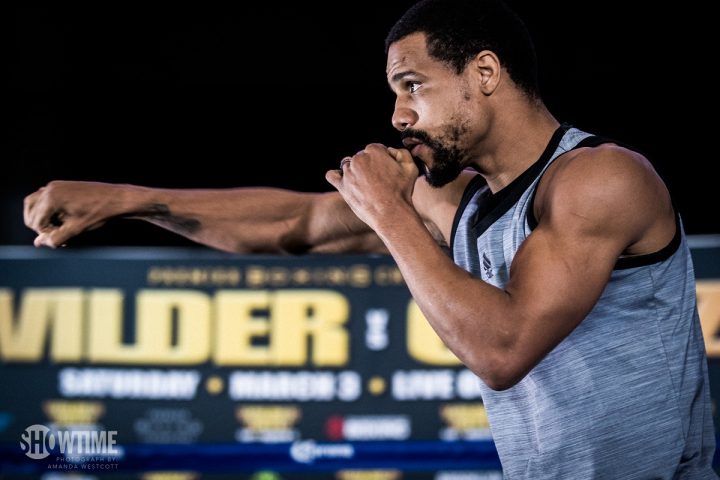 By Jeff Aranow: Andre Dirrell (26-2, 16 KOs) is ready to defend his interim IBF super middleweight title this Saturday night in his rematch with #3 IBF Jose Uzcategui (26-2, 22 KOs) on Showtime at the Barclays Center in Brooklyn, New York.

Dirrell vs. Uzcategui 2 is the chief support for the heavyweight clash between WBC champion Deontay Wilder and Luis Ortiz. Dirrell says he’s ready to steal the show from Wilder-Ortiz.

10 months ago, Dirrell beat Uzcategui by an 8th round disqualification at Oxon Hill, Maryland. Dirrell, 34, because Uzcategui hit him after the bell in the 8th round and knocked him out. The rematch is to clear up the controversy surrounding the ending of the fight. Dirrell says he’s watched the fight on replay countless times, and he knows the mistakes he made in the fight. He doesn’t want to let that happen again.

One mistake that Dirrell kept making was fighting with his back against the ropes. Each time he did that he was inviting trouble, because it enabled Uzcategui to tee off on a stationary target. When the two were in the center of the ring, Uzcategui was getting outclassed. Only Dirrell knows why he would go back to the ropes and fight Uzcategui from that area of the ring. It looked like Dirrell might have had stamina problems that forced him to back up. If he does that again on Saturday night, he could get knocked out.

”I’m ready to move forward with Virgil Hunter and get this win on Saturday night,” Dirrell said. ”What happened last fight is in the past. If I execute on fight night, I’ll walk out of there with the victory I’ve been working for.”

Uzcategui can be beaten, but Dirrell is going to have to mix it up with him a certain amount of times for him to accomplish that task. Dirrell can’t just give ground most of the time like he did last time. The southpaw Matt Korobov totally outclassed Uzcategui in attacking him with combinations in a one-sided 10 round unanimous decision in June 2014. Korovbov knocked Uzcategui down twice in round 7 and had him close to being knocked out.

Korobov was too tough and experienced for Uzcategui. The skill difference between the two was extensive. Uzcategui looked like a guy with raw power, but not much talent in the boxing skills department. Korobov didn’t make stupid mistakes like Dirrell though by fighting with his back against the ropes. Dirrell is a 2004 Olympian bronze medalist, but he fought like he had no sense at all against Uzcategui.

”I’ve watched the fight a million times and I know what I need to do to improve on the performance,” Dirrell said. ”I was starting to come on later in the fight. He’s a tough fighter but at the end of the day he’s there for me.”

Dirrell didn’t look like he was getting better against Uzcategui in rounds 6, 7 and 8. Dirrell was boxing and getting hit every once in a while, by big shots from Uzcategui. Dirrell was losing the fight at the time of the 8th round disqualification by the scores 77-74, 77-75 and 76-76. Dirrell wasn’t fighting Uzcategui enough to win the rounds. To beat a pressure fighter like Uzcategui, Dirrell will need to out-punch him when necessary and stay off the ropes.

In the rounds that Uzcategui won, Dirrell was fighting off the ropes and looking passive. Dirrell wasn’t firing back at Uzcategui during those instances. He was just trying not to get hit. It’s the same thing Dirrell did in his fights with Arthur Abraham and Carl Froch. Dirrell didn’t learn from those fights, and it cost him against Uzcategui.