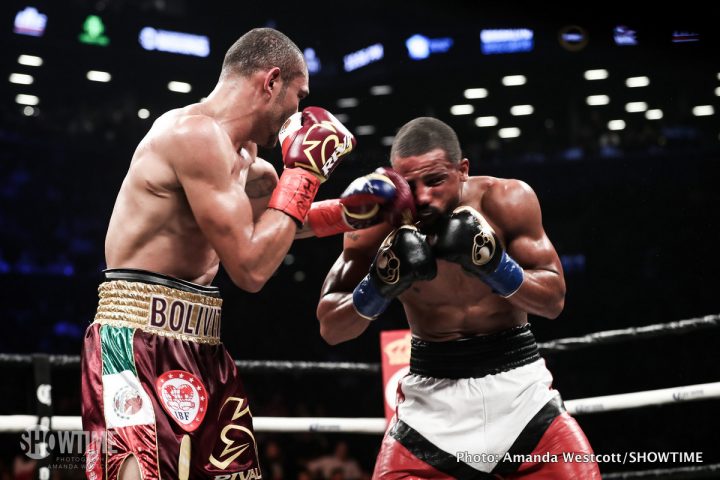 By Scott Gilfoid: Interim IBF super middleweight champion Andre ‘The Resurrected’ Dirrell (26-3, 16 KOs) was beaten by Jose Uzcategui (27-3, 23 KOs) by an 8th round retirement on Saturday night in a fight televised on Showtime Championship Boxing at the Barclays Center in Brooklyn, New York.

Dirrell’s trainer Virgil Hunter pulled him out after he took a lot of heavy shots from the younger 27-year-old Venezuelan Uzcategui in the 8th round.

Dirrell looked like he’d put on too much weight after the weigh-in, as he was slow and sluggish during the fight. When the two fighters met for the referee’s instructions at center ring, Dirrell looked like a light heavyweight. The day before at the weigh-in, Dirrell was so thin that he almost sickly looking. He clearly put on way too much weight overnight, and it cost him the fight. The last time I saw Dirrell overhydrate was in his loss to James DeGale in May 2015. It was the same situation for Dirrell. He packed on a ton of water weight after the weigh-in, and he ended up losing the contest by a 12 round unanimous decision.

Dirrell, 34, wasn’t up to the task of standing and going to war with Uzcategui the way he would have needed to do for him to get the ‘W’ in the fight. Round after round, Uzcategui was stalking Dirrell and hammering him with power shots. Dirrell was throwing jabs to try and keep Uzcategui off of him, but it wasn’t working. Uzcategui wasn’t walking through the jabs and landing heavy shots to the head and body.

At the end of round 3, Uzcategui dropped Dirrell with a right to the body after the bell had sounded. Dirrell sunk to one knee with the late body shot. The referee didn’t step to warn Uzcategui for the late punch, although he should have given how the first fight ended last May. In that fight, Uzcategui knocked out Dirrell by hitting him after the bell sounded to end the 8th round. Uzcategui was subsequently disqualified for the late hit and Dirrell was given the win. In last Saturday’s fight, Uzcategui hit Dirrell with a body shot a fraction of a second after the bell sounded to end the 3rd round. Referee Ricky Gonzalez Uzcategui a huge break by not penalizing him.

“I’ve been in there with long fighters before, but he was especially long,” said Dirrell. “I think I was a little heavier than I wanted to be tonight, but that’s no excuse. Uzcategui did a great job. We knew we needed a knockout. The way it was going I needed to at least pick it up. I felt a little sluggish and he hit all the right shots. None of them really hurt, but he hit me where he was supposed to.”

Dirrell wasn’t letting his hands go the way he needed to. Dirrell had the advantage boxing skills and mobility, but he couldn’t use his talents due to him being so heavy.

Round 4 was a one-sided round with Uzcategui unloading on Dirrell with his power shots. Uzcategui stalked Dirrell around the ring, hitting him nice right hands and lefts. Uzcategui didn’t go to the body that much. I guess he was afraid of getting hit by one of Dirrell’s quick counters if he had started throwing body shots.

Dirrell showed flashes of his excellent talent in the 6th round when he started nailing Uzcategui with big left hands to the head. That round was the old Dirrell from years ago. That’s how Dirrell had been fighting before he met up with Uzcategui last year.

Round 7 was a close one with Uzcategui just barely getting the better of Dirrell with his heavy shots. Dirrell was hitting Uzcategui back with a lot of punches, but not enough to win the round.

Overall, it was a disappointing end to the fight. Dirrell used the wrong approach to fighting Uzcategui. Dirrell needed to follow the Matt Korobov blueprint by going after Uzcategui with power shots. Korobov beat Uzcategui by a 10 round decision in 2014 after knocking him down twice in the 7th. Dirrell didn’t want to slug with Uzcategui and that cost him the fight.

“I was a little surprised they stopped it in the ninth,” said Uzcategui. “I had said it would be the third round that I would knock him out. It took a little longer, but it finally came.”

Uzcategui said he wants to fight IBF super middleweight champion Caleb Truax, and then go after WBC champion David Benavidez after that. Benavidez will give Uzcategui a lot of problems with his punching power and his high work rate. That won’t be an easy fight for Uzcategui if Benavidez brings the same game we saw from him in his recent victory over Ronald Gavril.

As for Dirrell, his career is not looking good right now. He wasn’t impressive in either of his fights with Uzcategui, and he’s going to need to make some changes quick if he wants to be able to continue to be a major player at 168. Dirrell isn’t powerful enough to move up to 175 to mix it with fighters in that weight class. But if Dirrell is going to continue his boxing career, then he’ll need to work on getting his weight right. He can’t overhydrate for his fights or else he’ll continue to be sluggish.

Dirrell will also have to learn to slug a certain amount of time for him to beat the better fighters in the division. Ucategui had a big advantage in power shots landed over Dirrell. Uzcategui connected on 112 power shots in the fight compared to Dirrell’s 51. You’re not going to win too many fights if your opponent is hitting you with way more power shots than what you’re landing. You don’t win in the highest rungs of the super middleweight division by trying to jab your way to a victory the way Dirrell was.

“I think it was very clear in the first fight that I did my job. In the second fight I showed even more, so there’s going to be a lot of Uzcategui from now on,” Uzcategui said.

Uzcategui could afford to use his aggression to get the better of Dirrell, because he wasn’t throwing power shots. If Uzcategui tries to fight like that against WBA super middleweight champion George Groves, he could wind up getting knocked out. Groves is a bigger puncher than Uzcategui, and he’ll hurt him if he tries to walk him down like he was doing with Dirrell.