Ronald Ellis vs. Junior Younan quotes and weights for Friday 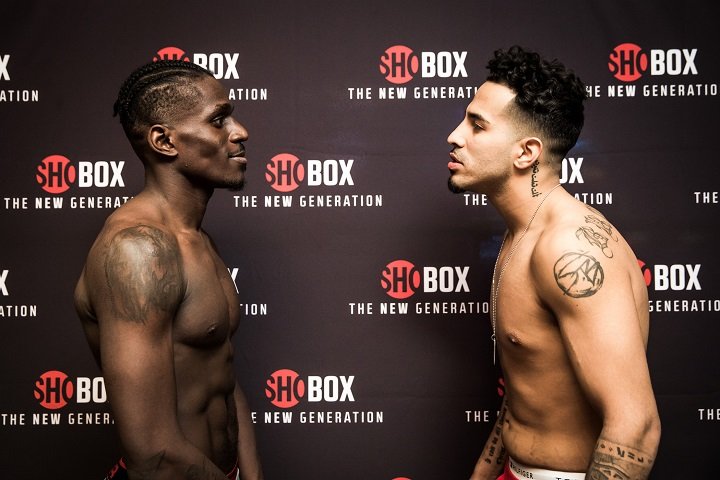 Younan (13-0, 9 KOs), a former amateur standout, is a highly-touted prospect from Brooklyn taking a major step-up in class against Ellis (14-0-1, 10 KOs), the 2010 National Golden Gloves Champion with two ShoBox appearances under his belt. Both prospects will fight in their first scheduled 10-round bout in Friday’s main event.

The event is promoted by GH3 Promotions in association with Roc Nation Sports, Victory Promotions, and Ringside Ticket. Tickets are just $10 general admission prior to the event and $20 on Feb. 2. For more information call: 1.800.HOT.WINN ext. 7117.

“This fight means the most to me because it’s my first main event. I’ve got to win and win decisively, and look real good for the fans watching on TV. If I win, I’ll be right there with the guys like David Benavidez and Ronald Gavril. I’ll be ready to take that next step.

“I let him do all the talking. We’ll just get cracking when we get in there. I’m smarter than him, and I’ll let my hands do the talking.

“He says he might bring it to me but that’s going to be bad news for him. He likes to fight in flurries and then backs off. We’re not going to let him get away with it.

“We sparred years ago, but he was just warming me up though.

“It’s another fight, another day. I have been here before, and he hasn’t.

“We have to make it look good. The main goal is to win decisively. After this, I want to mix it up with all the top guys in the super middleweight division.

“I’m looking to make a statement. This is a step-up test for me. But I’m coming here to pass the test.

“I feel like this is the right time. I feel like I’m in the best shape of my life. If I’m not ready now I’m not ever going to be ready. It’s time to go.

“He comes in good shape and he comes to fight, but I don’t think he has anything special though.

“My best talent is I can adjust. I’m not a one-dimensional fighter. At the end of the day, I can do whatever he wants to do, and I can do it better than him.

“We sparred and I honestly don’t think he’s that good. I didn’t think much of him. We’re sparring with elite fighters. He isn’t bringing anything we haven’t seen.

“This is my time. I’m fully focused now. I’ve dedicated my entire being to this fight. Before I was young and I wanted to have fun. The past 12 weeks I didn’t miss a day in the gym.

“At the end of the day, I want a world title. And I’m not far from reaching my dream. I can’t make mistakes right now.”

“You have to have tunnel vision. I’m not worried about the lights and TV. When I get in there it’s a fight.

“Sparring with (Adrien) Broner, (Shawn) Porter, (Robert) Easter, it’s been a great learning experience. I probably learned the most from Easter and Broner. With Shawn, he was strong and I held my own.

“I am going to box and follow my game plan. Chinea is a durable guy – he puts the pressure on you, and tries to break you down in the second half of the fight.

“If everything goes as I plan, the fight not go the distance. This will be a good win.”

“At the end of the day, you can come in with a name but that doesn’t make you a name. I’m living off nobody’s legacy. I bring my A-game every time. Some things in this sport you can’t teach and I think I have those qualities.

“My experience is an advantage. I been here and done that and he is just getting his feet wet.

“My mindset is that I have this chip on my shoulder. Nobody believes in me and I just keep proving everyone wrong. This won’t be an upset when I win.”

“I’ve progressed so much mentally and physically since my last fight on ShoBox. My team has really developed and they help me get better every day.

“He’s a slick southpaw, but we’ve been in the gym preparing for southpaws. I’ve been working with Tevin Farmer, Ray Robinson, (Sergey) Lipinets. We’ve been getting good work in the gym.

“At the end of the day, I was getting ready for a southpaw. We’ll make whatever adjustments we need to make when we get in the ring. We’ll do whatever it takes to win.

“Every name they’ve thrown at me I’ve accepted. After this fight, I’m ready for whatever.

“We’re going to start it off for Philly this weekend. After I win on Friday we’ll enjoy the Eagles’ win on Sunday.

“I am in the same boat as the last ShoBox fight. I’m facing another undefeated fighter and I’m ready to take another ‘0’.”

“Teah is a boxer-mover. We’re going to outshoot him with sharp shots.

“I’m versatile. If an opponent comes and wants to crack, we can crack. But if you want to box I can pick you apart.

Canelo is the more skilled boxer than GGG »