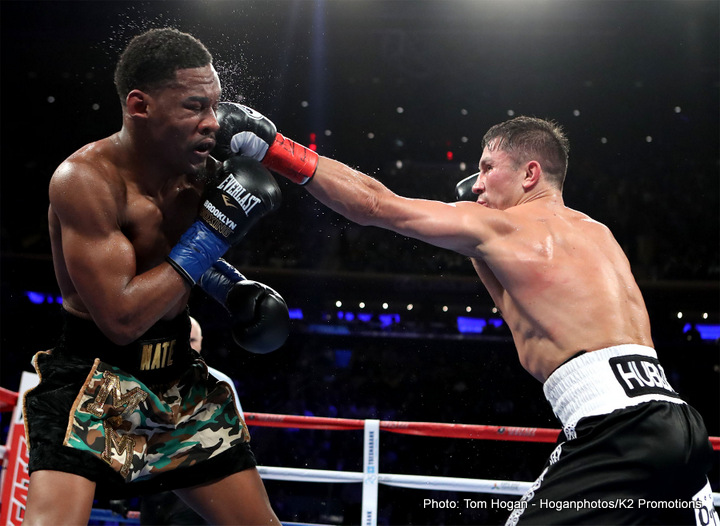 Hearn says the 33-year-old O’Sullivan wants the fight, and so does his trainer and manager, but he was told not to take the fight. That someone is possibly O’Sullivan’s promoters. He’s promoted by Golden Boy. If they’re not interested in making the Jacobs vs. O’Sullivan fight, it’s easy to understand why. O’Sullivan would be an underdog against Jacobs, and there’s a high possibility that he would lose by a knockout. The money wouldn’t be great to fight Jacobs, who isn’t a world champion after losing to Gennady ‘GGG’ Golovkin last year by a 12 round unanimous decision.

“Spike wants the fight, as does his trainer/manager, but has been told he is not allowed to take it,” Matchroom Sport promoter Hearn said on his social media site.

O’Sullivan can get a nice payday battling Golden Boy fighters David Lemieux and Saul ‘Canelo’ Alvarez. O’Sullivan would have a fairly good chance of beating Lemieux. Canelo would be a different matter, but it depends. If Canelo comes out of the second Golovkin fight depleted and no longer the same fighter, O’Sullivan might take him out. Right now, Lemieux is looking very vulnerable after the way he lost to WBO middleweight champion Billy Joe Saunders on December 16 in Quebec, Canada.

Jacobs’ new promoter Hearn is finding out how hard it is to match him. When Hearn first started promoting Jacobs, he was highly optimistic, thinking he had struck gold in signing the New York native. Hearn thought he could easily turn Jacobs into a star. Hearn is finding out that he can’t turn Jacobs into a start because he can’t get the top names to face fight him. Jacobs’ first fight under Hearn’s promotional banner was against Luis Arias. Jacobs beat Arias by a 12 round decision last November on HBO. Jacobs vs. Arias didn’t get a lot of buzz from the boxing community, and the fight itself wasn’t a particularly interesting one to watch. Both fighters played it safe more or less for 12 rounds.

Hearn said he was going to keep Jacobs busy, but that’s not happening. Jacobs’ will have been out of the ring for 6 months by the time he sees action on April 28. At this pace, Jacobs be fighting 2 times per years. That’s not busy for a contender. For a world champion, fighting 2 times per year is good, but not for an aging contender. Hearn should be fighting Jacobs no less than 3 times per year, and preferably 4 times. If the goal is to turn Jacobs into a superstar, Hearn needs to have him seen as much as possible by the U.S boxing public by fighting him 4 times per year. The problem is HBO likely doesn’t have 3 or 4 dates per year for Jacobs to fight on their network. 2 times is probably the best Jacobs can get. If Hearn doesn’t start finding good opposition for Jacobs to fight, I’d be surprised if HBO extends his contract with their network when it expires. Jacobs doesn’t fight in an exciting style like Gennady Golovkin. Jacobs does a lot of boxing, and moving. For some reason Jacobs does not seem to like to mix it up.

There’s now less than 2 months go go before Jacobs’ next fight on April 28th on HBO Boxing, and he still doesn’t have an opponent. Getting a good fighter to agree to face someone in Jacobs’ class with just 2 months’ notice won’t be easy for to do. Hearn is going to need to make a big offer to someone and he’s going to need to do it soon.

Ronald Ellis vs. Junior Younan quotes and weights for Friday »