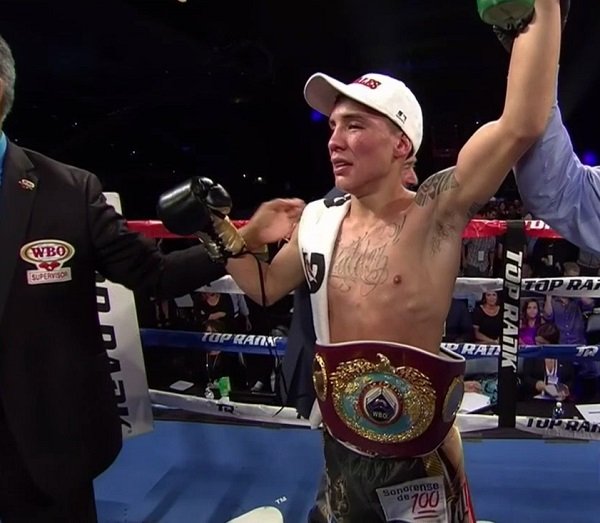 By Chris Williams: WBO featherweight champion Oscar Valdez will be fighting next against Scott Quigg (34-1-2, 25 KOs) on March 10 on ESPN. The negotiation terms have been agreed upon, according to RingTV. The fight will take place at the StubHub Center in Carson, California.

The Top Rank promoted Valdez (23-0, 19 KOs) will put his unbeaten record and WBO 126 b. title on the line against former WBA World super bantamweight champion Quigg. This is a must win fight for Valdez, who his promoters are trying to turn into a star. Valdez was exposed in his last fights as not being the fighter that many people in the boxing world originally thought he was.

”He should beat Valdez,” said Quigg’s trainer Freddie Roach to the latimes.com. ”I don’t think Valdez is that good.”

Roach’s appraisal of Valdez should concern Top Rank, because he’s basically saying what a lot of boxing fans think about their fighter. Valdez is a decent slugger, but he’s not that good, and he’s not going to stay on top for much longer unless the WBO changes the way they’re ranking guys. They have some very good fighters in their top 15 ranking right now with Joseph Diaz Jr. at No.1 and Carl Frampton and Quigg also ranked.

The 26-year-old Valdez was knocked down by his last opponent Genesis Servania last September. Valdez won the fight by a 12 round unanimous decision, but it was a close call. He was forced to box Servania in the last 7 rounds of the fight to a decision. Each time Valdez attempted punch with Servania, he was punished. Valdez’s chin has come into come into question after that fight, as it was the second consecutive contest in which he was hurt. Against Miguel Marriaga, Valdez was staggered in the last 3 rounds. Valdez won the match, but it wasn’t the easy fight that many thought it would be for him.

Before Valdez’s last 2 fights, he didn’t have a lot of guys in the division that wanted to tangle with him. Now things have changed. Valdez now is vulnerable, and very beatable. Quigg can’t wait to get in there to slug with Valdez to try and knock him out. Carl Frampton is interested in facing him as well. Top Rank is going to have to figure what they’ll do with Valdez if he gets beaten by Quigg. They might need to retool his game to make him less of a slugger and more of a boxer, because right now it doesn’t look like his career is going to be a long one with the way he’s looking.

If Quigg defeats Valdez, it’s going to be tough for him to find a place in the division. Valdez might need to move up to super featherweight, because it’s unlikely that Top Rank will match him against WBC champion Gary Russell Jr. He’s not with Top Rank. IBF champion Lee Selby will be facing Josh Warrington and then possibly Carl Frampton. Those guys are all wrong for Valdez. He could lose to all of them. It might be best for Valdez to move up in weight. WBO super featherweight champion Vasyl Lomachenko is moving up to lightweight soon. Top Rank can have Valdez fight for Lomachenko’s WBO 130lb. title once he vacates the belt. That way the title goes to another Top Rank fighter.

Valdez is from Mexico. He fought in the 2008 and 2012 Olympics. But in both times, he lost to better fighters. Valdez made it to the quarterfinals of the 2012 Olympics in London before being eliminated by John Joe Nevin of Ireland by a 19-13 score. Valdez had a good amateur career, but he was always beaten when he got near the top.

Roach will be working on making sure that Quigg can cut off the ring on Valdez if he runs like he did in his last fight against Servania. Valdez started out slugging against Servania like he does with all his opponents, but after getting knocked down in round 4 and staggered a couple of times, he had to put on his track shoes and run for the last 8 rounds. It was strange to see Valdez running from a non-puncher like Servania, but it shows that there might be a chin problem that he’s dealing with now. Valdez’s once sturdy chin has abandoned him since his fight with Marriaga.

Errol Spence ready to take Mayweather’s spot as No.1 fighter »