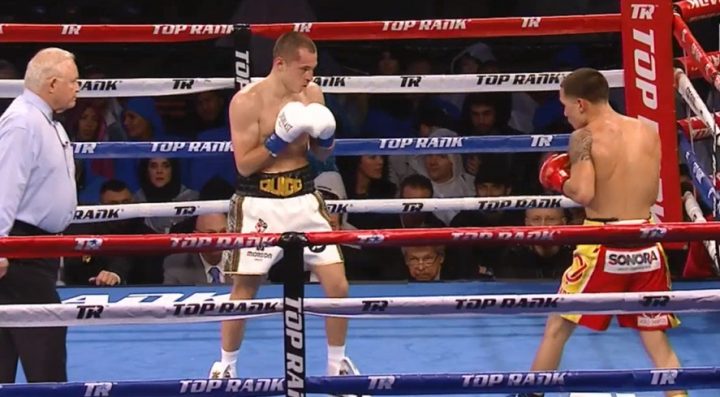 By Jim Dower: WBO World featherweight champion Oscar Valdez (24-0, 19 KOs) defeated former 122 lb. champion Scott Quigg (34-2-2, 25 KOs) by a 12 round unanimous decision on Saturday night in a fight that was a very hard one for the Mexican fighter on ESPN at the StubHub Center in Carson, California.

Valdez broke Quigg’s nose. In return, Valdez has his own front teeth rearranged. A lot of blood was pouring out of Valdez’s mouth the entire second half of the contest from his teeth. Quigg suffered a cut over his left eye in the 6th. The cut seemed to make it hard for Quigg to see out of his eye, as he was a hit a lot in the last half of the contest.

Valdez had too much hand and foot speed for Quigg to deal with. That was the difference in the fight. Valdez was able unload on multiple punches in and nail Quigg. Valdez’s tendency to throw a lot of shots at a time caused him to get hit at times in between his shots. Valdez was lucky he didn’t get clipped more often, because he could have been hurt with the style he was using. It’s easy to understand why Valdez had been hurt in his last two fights by Miguel Marriaga and Genesis Servania. Valdez forgets his defense while throwing combinations, and he leaves himself wide open to being countered. Valdez throws so many punches that he gets tired, and he loses power on his shots. He won’t be able to do that against someone with more speed and power than Quigg. Gary Russell Jr. would be a treat to Valdez if there was a way for a fight between them to take place. It’s unlikely though, as he’s with a diferent promoter than the Top Rank promoted Valdez. 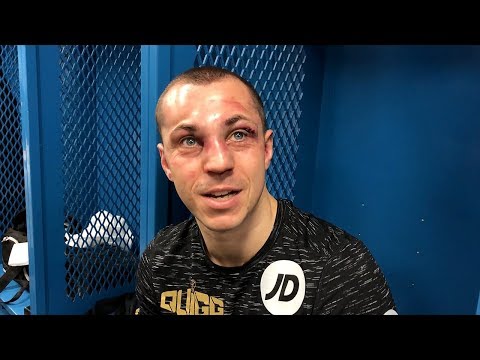 It was a good fight with lots of action. Valdez was hurt in the 5th round from a big left hook from Quigg. Later in the fight, Valdez hurt Quigg with a hard head shot in the final 20 seconds of the 11th. Valdez tried to pour it on, but Quigg started using jab and he easily held off the shorter Mexican fighter. Interestingly enough, when Quigg finally did start using his jab, he was able to keep Valdez off of him. It was a missed opportunity for Quigg not to use his jab more often in the fight, because Valdez was too short to reach Quigg when he was using his jab.

In round 12, Valdez tied Quigg up frequently and used a lot of movement to stall out the fight. It was a mostly uneventful 12th compared to the rest of the fight.

Valdez was hurt by a low blow in the 11th. Valdez chose to use a lot of time to get a rest break. It looked like he was tired and wanted to rest rather than being hurt by the low blow.

Quigg had come in 2.8 lbs. overweight at the weigh-in on Friday night, so he wasn’t eligible to fight for Valdez’s WBO title. 20 percent of Quigg’s purse for tonight’s fight was subtracted with 10 percent going to Valdez and the other 10 percent being given to the California Commission.

It was a good performance by Valdez tonight. He showed he could beat an excellent former super bantamweight champion. It’s doubtful that Valdez could beat Vasyl Lomachenko or Leo Santa Cruz. Top Rank isn’t about to match Valdez against Lomachenko, as they want to keep those two revenue strings going strong. If they match them up against each other, then one of them will lose, likely Valdez, and the boxing public interest in him could drop off. Santa Cruz is with Al Haymon, so that likely makes it impossible for him and Valdez to ever fight. 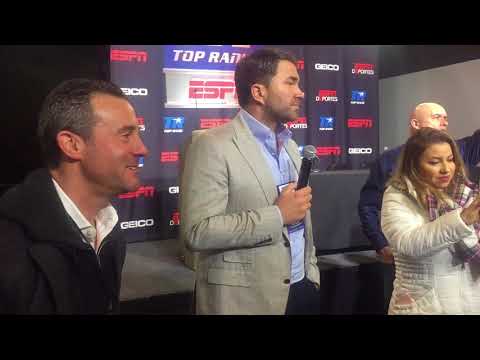