Quigg: I should have cut the ring off more on Valdez 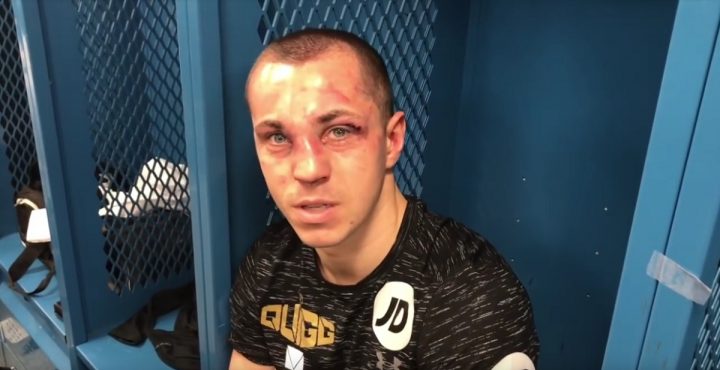 By Tim Royner: Scott Quigg (34-2-2, 25 KOs) says the biggest mistake he made last Saturday night against WBO World featherweight champion Oscar Valdez (24-0, 19 KOs) was not cutting the ring off enough to get to him and force him to fight in the middle rounds of their fight at the StubHub Center in Carson, California.

Valdez got on his bike in the middle rounds after getting hurt by a left-right combination from Quigg in round 5. Valdez used movement to box his way to a 12 round unanimous decision over Quigg. This was perhaps the toughest fight of Valdez’s career, as he took more punishment than he had in his two previous hardest fights against Miguel Marriaga and Genesis Servania. Valdez didn’t look beat up after those fights but did after last Saturday against Quigg.

Congrats to @oscarvaldez56 and his team.Again I apologise for not making weight but I couldn't have done any more in camp or in the ring last night.Its a tough sport but one that I dedicate my life to. I will be back 👊 #TeamQuigg pic.twitter.com/PE3zQnUG0S

The judges scored the fight 118-110, 117-111 and 117-111. Quigg took more punishment than he would have liked despite purposefully starting slow in the first 4 rounds. He didn’t want to mix it up with Valdez when he was fresh in the first quarter of the fight, as he felt that he would fade in the later rounds. That didn’t happen though. Valdez kept the fight at a fast pace for the entire 12 rounds and gave Quigg a beating that left him with a broken nose and a cut over his left eye. For his part, Valdez suffered a broken jaw. The way the fight was fought; neither fighter was going to get out of the match without injuries.

“I know he had a problem because he had blood coming out of his mouth after the 5th round,” Quigg said about Valdez. “I hit him with a big shot and rocked him a big. Then he started to box a bit. I gave him a bit too much room,” Quigg said.

It seemed like Quigg stayed too far on the outside and wasn’t throwing enough punches to give himself a shot at winning. Quigg kept trying to land uppercuts, but he was missing with that shot due to the excellent head movement from Valdez. What Quigg should have done is target Valdez’s body more often, because that was where he had much more success in landing his shots. Valdez was clearly trying to box and keep out of the way of Quigg’s heavy shots.

It looked like Quigg got discouraged when he couldn’t land, and he wasn’t attacking Valdez enough to wear him down. By Quigg targeting the head so much, he broke Valdez’s jaw and had him bleeding out of the mouth. The injury might have occurred in round 5. That’s where Quigg thinks he hurt Vadez with a big left hook that caused his legs to turn to jelly for a moment.

”I think it was a lot closer than the scorecards, but I think the right man won,” Quigg. ”He hit me but nothing really troubled me. He does have power, but nothing that was devastating where I was frightened to go forward or anything. In the first 4 rounds, I knew he was going to come out fast. I wasn’t going to start trading with him early on. I kept the pressure on. I was doing a lot of blocking and moving. I was making him work a lot with his shots,” Quigg said.

Valdez was beatable last Saturday night, but it would have taken more shots from Quigg to get the victory. He wasn’t willing to take what was there by going to the body. That would have made the closer. Quigg still might not have won the fight, but there’s a chance that he could have worn Valdez down if he focused his shots downstairs.

”After the 3rd round, after he’d throw some shots, he’d back off and get a breather and come again,” Quigg said. ”The plan was to keep on him when he wanted a breather. He wasn’t getting one. I managed to do that. In the middle of the rounds, he got on his bike and he boxed well. I think I was a bit slow keeping up with him. I should have cut off the ring a bit more,” Quigg said.

It might be better for Quigg to face Selby for the IBF title. Selby and Warrington will be facing each other soon. However, Carl Frampton is positioned to face the winner of the Selby-Warrington fight. Quigg will have to target the IBF belt. When the smoke clears, we could see Frampton and Quigg fighting each other in a rematch for the IBF title. Quigg lost to Frampton by a 12 round split decision two years ago in February 2016. Quigg suffered a broken jaw and had to fight through a lot of pain to make the fight close at the end. After that fight, Quigg won three consecutive fights before losing to Valdez.

I hope the fans enjoyed it. It was an easy fight. I apologize for coming in overweight,” Quigg said. I take full responsibility. I rehydrated to the same amount as I would if I made 126.”

Quigg took a massive amount of heat from boxing fans for coming in 2.8 lbs. over the featherweight limit for his fight with Valdez. Quigg said he fractured a foot while jumping rope a month ago, and he couldn’t train properly to take off the weight due to the injury. It wasn’t intentional on his part to come in overweight. He tried to take weight off without being able to run, and it wasn’t possible. Quigg says his rehydrated weight last Saturday was the same as it was for his fights when he made the featherweight limit. Quigg was a little heavier than Valdez last Saturday but not enough for it to have been a big deal. Quigg not agreeing to be weighed in on the morning of the fight for the secondary weigh-in looked bad, even though he didn’t put a lot of weight back on. Not agreeing to be weighed in gave the appearance that Quigg was looking to gain an advantage over Valdez. Quigg lost more than 20 percent of his purse for the fight in penalties for coming in overweight.


« Give Canelo a Break