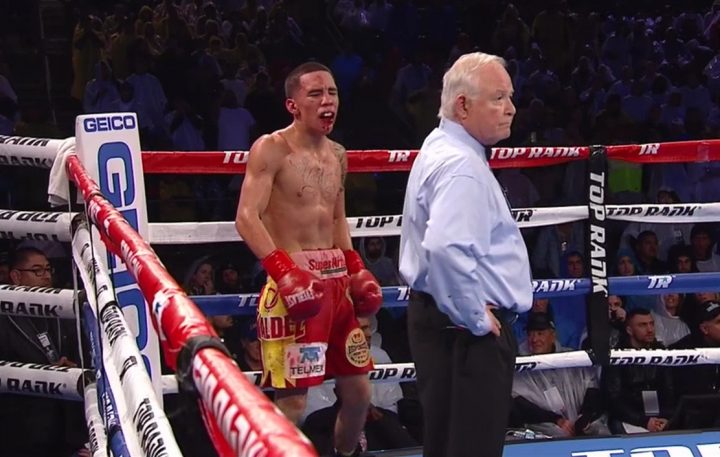 It’s too early for the 27-year-old Valdez to come back from the broken jaw he sustained in his last fight against former super bantamweight champion Scott Quigg on March 10 on ESPN from the StubHub Center in Carson, California. Valdez dominated Quigg from start to finish winning by a 12 round unanimous decision by the scores 118-110, 117-111 and 117-111.

It’s good that Valdez’s promoter Arum isn’t trying to rush him back into the ring so soon, as the last thing he needs is to have his jaw re-broken. Arum seems to be in a little more of a hurry for his fighter Vasyl Lomachenko, who had surgery on his right shoulder this week to repair a torn labrum he suffered in his last fight against WBA lightweight champion Jorge Linares on May 12. Arum is already talking about having Lomachenko return to the ring to fight on December 8 against WBO lightweight champion Ray Beltran, who he promotes. It’s a very quick return that Arum wants for Lomachenko.

“The wires are out, he’s eating solid food now, feeling a lot better and he’s under medical supervision,” Arum said to ESPN.com. “They’ll let us know when he’s good enough to train and spar again, but I don’t anticipate he’ll be fight again before November or December, and maybe not until early next year,” said Arum.

The two-time Olympian Valdez suffered his broken jaw in round 5 of his title defense of his WBO 126lb title against Quigg. Valdez got too close to Quigg, and he paid for it by getting nailed by a big left hook that staggered him. While Valdez was able to take the shot, his jaw was broken, and he fought the rest of the fight with blood trickling out of his mouth. Valdez fought through the pain and was able to go the full 12 round distance to get the fight. In hindsight, it might have been better for Valdez to have the fight stopped, because fighting with a broken jaw is a risky thing. If the fight had taken place in New York, I wouldn’t be surprise if it were stopped.

It was an exciting fight with both guys taking major shots to deliver their own big punches. Quigg ended up suffering a badly broken nose. Valdez is accustomed to getting fast knockouts, but in this case, he was forced to battle hard for 12 rounds to get the victory. It was a very hard fight for Valdez and Quigg. I’m sure boxing fans would love to see a rematch, but it’s unlikely Arum will take a chance at letting that happen. Valdez can’t be in too many more wars like Quigg gave him without quickly deteriorating. When Valdez does come back,. he’ll probably be matched softly by Arum in his first fight back.


« Loeffler: GGG deserves more than a 65/35 split for Canelo rematch