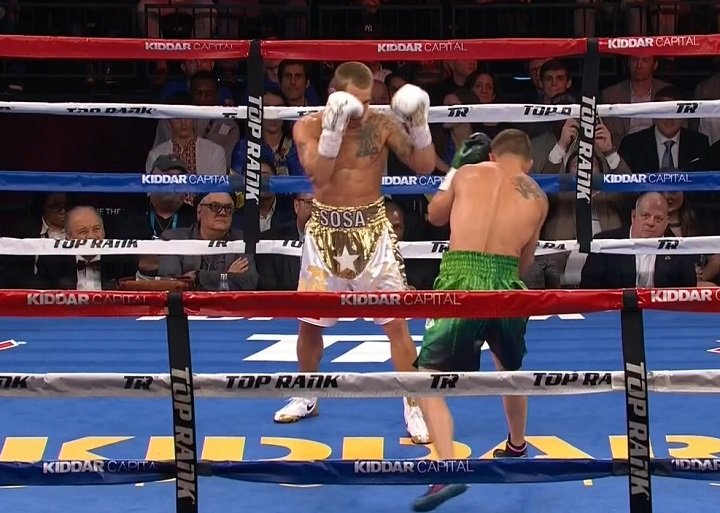 By Jim Dower: WBO super featherweight champion Vasyl Lomachenko (8-1, 6 KOs) put on a boxing clinic in giving former WBA 130lb champion Jason Sosa (20-2-4, 15 KOs) a beating in stopping him at the end of the 9th round on Saturday night at the MGM National Harbor, in Oxon Hill, Maryland. The fight was stopped by Sosa’s trainer at the end of the 9th round. He didn’t want Sosa to continue to soak up needless punishment at the hands of Lomachenko.

Sosa was hurt badly in the 8th round after getting hit with a hard body shot from Lomachenko. With Sosa barely able to stay on his feet, Lomachenko hit him with an avalanche of punches to the head and body. To Sosa’s credit, he stayed on his feet during the flurry of shots.

Lomachenko taunted Sosa at the end of the 8th after hitting him with a body shot. It was unnecessary for Lomachenlo to tease Sosa, but he’d been doing the same thing earlier in the fight. Lomachenko seemed annoyed that Sosa wouldn’t go down, so he started to imitate him. Sosa was landing shots throughout the fight, but they became rarer as the fight moved into the second part.

Lomachenko did a good job of making Sosa miss with his shots, but he couldn’t get out of the way of everything that he threw. Sosa landed more shots against Lomachenko than any opponent has landed since his loss to Orlando Salido in 2014. Where Sosa went wrong was throwing too many head shots. Those were not going to land with any kind of accuracy. Salido was able to get the better of Lomachenko by throwing body shots. He had watched enough of his fights to know that he wasn’t going to have much luck in aiming his shots to the head. Sosa failed to learn from Salido’s blueprint.

“I came to show my “High Tech” style and to prove that I am the best fighter in the world,” Lomachenko said. “I think I did my job.”

Sosa did a pretty good job of connecting with his power shots in the first 2 rounds. Lomachenko clearly got the better of him, but the fight wasn’t out of control at that point. Sosa was connecting with some nice shots, and he looked like he belonged inside the same ring with the Ukrainian.

The fight started to get out of hand in the 3rd round when Lomachenko began to throw fast 4-punch combinations. Lomachenlo was focusing more on speed than power, and he was able to connect with many of these shots. Sosa made the mistake of covering up during these flurries rather than punching with Lomachenko. It would have been risky for Sosa to throw while Lomachenko was throwing, but he would have had at least been able to counter him and land something. The reason why Lomachenko was able to throw his flurries is because Sosa was covering up and he’d always wait until Lomachenko was done throwing before he would start to throw his own shots. That was not a smart thing to do with Lomachenko, because he does well against fighters that try and take turns throwing. He’s more vulnerable when he’s unloading his shots. 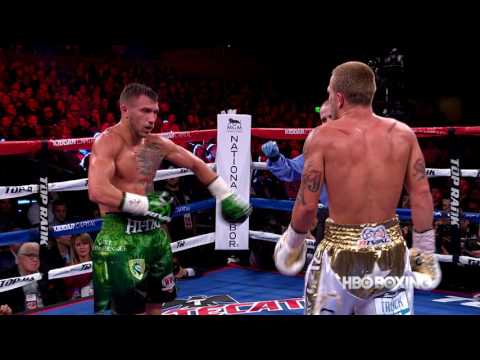 In round 4, Lomachenko boxed Sosa through most of the round, changing angles constantly with his punches by shifting his feet quickly. Near the end of the round, Lomachenko threw a flurry of punches that cause Sosa clean. He took the shots well, but it was beginning of the end. The stopped being competitive at that point and began to look more like a full scale rout.

Round 5 was totally one-sided with Lomachenko landing punch after punch without getting hit with anything back. Sosa’s corner might have done well to stop the fight in this round because it was clear that he had no chance of winning. Near the end of the round, Lomachenko hit Sosa with 6 consecutive left hands to the head. Sosa failed to block any of the punches. The crowd was really feeding off of what Lomachenko was doing. Sosa had words with Lomachenko at the end of the round.

At the start of round 6, Lomachenko toyed with Sosa, taunting him and pretending to be a matador with a cape playing with a bull that he was torturing. Lomachenko imitated Sosa by throwing a wild shot in the same way that he’d been throwing wild punches during the fight. It seemed that Lomachenko was bothered by what Sosa had said to him at the end of the 5th round, so he decided he was going to pay him back by taunting him for the entire round. It was kind of petty because Sosa was getting schooled from round 1, and it wasn’t necessary for Lomachenko to toy with him. Sosa landed almost nothing in the entire round. It was hard to watch because it was no longer a fight. It was a torture session watching an over-matched guy get pounded by Lomachenko.

Lomachenko continued to hit Sosa with blistering fast shots in round 7. Lomachenko wasn’t loading up with his shots the way you would think he should have if he wanted to get him out of there. It looked more like Lomachenko wanted to get a stoppage win by throwing speedy shots until Sosa collapsed. Sosa was able to take the shots despite getting hit with a ton of punches.

In round 8, Lomachenko hurt Sosa with a hard body shot followed by a flurry of punches that had him staggering and ready to go. Somehow Sosa was able to stay on his feet during the round. It was hard to believe that Sosa was able to take the kind of shots that he was hit with without going down. The referee was really patient not to stop the fight because he would have been perfectly justified in doing so. It looked like the referee was able to stop the bout at one point, but Sosa threw a right hand that hit Lomachenko. This caused the referee to let the round continue to the end. Sosa only initiated one or two clinches during the onslaught by Lomachenko. Sosa would have been better off holding as much as possible to try and ride out the round.

In between the 8th and 9th rounds, Sosa’s trainer told him that he was going to give him 1 more before he stopped the fight. He said he was concerned with his health and didn’t want to let him take a beating.

In round 9, Lomachenko took it easy on Sosa in some way. He wasn’t throwing a lot of shots with the power that he’d done in rounds 7 and 8. It looked like Lomachenko wanted Sosa to be able to finish the fight on his feet. If Lomachenko had wanted, he could have taken out the badly hurt Sosa at any time in the 9th, because he was moving around the ring like he was punch drunk and still hurt from the previous round.

It was a good win for Lomachenko tonight. It was a mismatch though. Lomachenko’s promoters at Top Rank picked out a guy that was made to order for Lomachenko by putting him in then ring with a brawler in Sosa. Lomachenko may be moving up to lightweight to look for bigger fights. There’s nothing more he can do at super featherweight. He’s probably not going to get the other champions to fight him. If Lomachenko stays at super featherweight, he’ll be stuck defending his WBO title against the obscure contenders. Lomachenko will move up to lightweight shortly and go after a fight against WBC champion Mikey Garcia. That match will create a great deal of noise in the boxing world and make huge news.