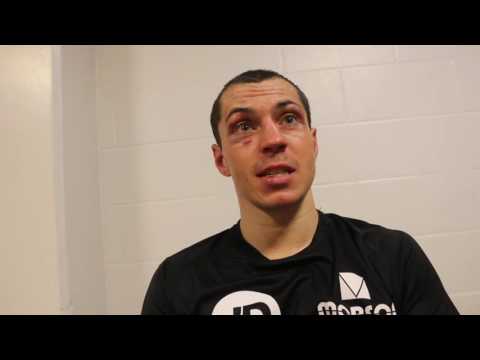 By Scott Gilfoid: Former WBA super bantamweight champion Scott Quigg (32-1-2, 24 KOs) stopped the game but limited Jose Cayetano (20-5, 9 KOs) in the 9th round in his debut at featherweight on Saturday night at the Manchester Arena in Manchester, UK. Quigg, 28, dropped the 31-year-old Cayetano with a right hand to the head in the 9th.

Each round of the fight was virtually the same with Cayetano fighting with his back against the ropes, hitting Quigg with pesky shots, and getting hammered by his bigger punchers. Quigg’s power did not look at all impressive. He was hitting Quigg with the power of a super bantamweight, and not hurting him at all. The only reason Quigg got the knockout was because he was able to hit Cayetano with so many shots in the fight. Cayetano backed up against the ropes made it easy for Quigg to get the KO, because of the Mexican fighter had stayed in the center of the ring, he likely would have never been hit with the knockout punch.

Despite winning the match by a 9th round knockout, it was not impressive stuff from Quigg. His power didn’t move up with him in moving up from the 122lb division. Cayetano had zero problems taking the shots from Quigg despite getting royally hammered in each round. It was all one-way traffice in the fight, as Cayetano had no power to speak, and he couldn’t trouble Quigg with any of his shots. Cayetano did land a lot of punches, but he just didn’t have any power. It was a case of good match-making by Quigg’s promoter Eddie Hearn to find a light hitter for Quigg’s debut at featherweight. It doesn’t matter.

Unless Hearn is going to steer Quigg in the direction of the light hitting IBF featherweight champion Lee Selby, it’s hard to imagine that he’s going to find much success in the featherweight division. The way that Quigg looked tonight, I think he would be destroyed by WBA champion Jesus Cuellar, WBC champ Gary Russell Jr., WBA ‘Super’ champion Carl Frampton and WBO champion Oscar Valdez. I can understand Quigg wanting to get a payday by fighting Frampton or Selby, but I cannot see him succeeding anyone but Selby, who many boxing fans see as the weak link in the division.