Hearn: ‘If Quigg loses to Carroll, he probably RETIRES’ 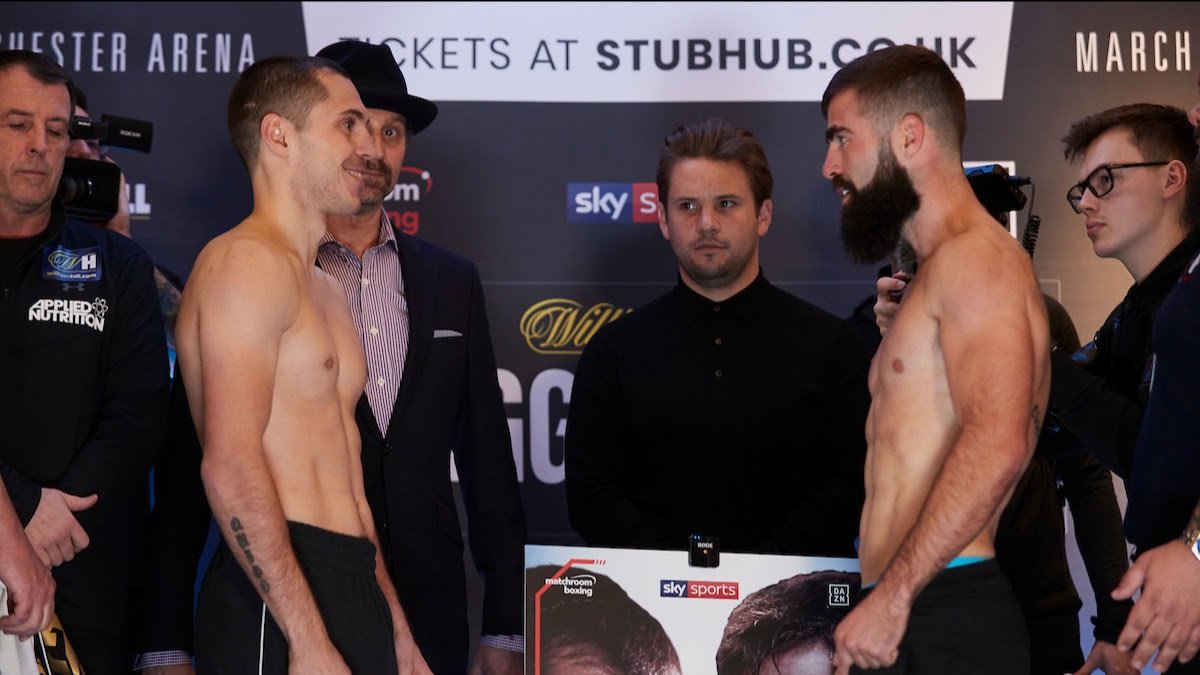 By Charles Brun: Scott Quigg has an important fight tonight against the always tough Irish fighter Jono Carroll in their headline attraction LIVE on DAZN and Sky Sports from the Manchester Arena in Manchester, England.

Quigg’s promoter Eddie Hearn of Matchroom Boxing believes that he may retire if he loses to Carroll tonight, considering he’s not facing an elite level 130-pounder. If Quigg can’t defeat a guy at Carroll’s level, then he’ll probably walk away from the sport.

How much does Quigg have left?

The 31-year-old former WBA super bantamweight champion Quigg (35-2-2, 26 KOs) is fighting for just the second time in two years since suffering a PUNISHING 12 round unanimous decision defeat to Oscar Valdez (27-0, 21 KOs) in March 2018.

Quigg took a career worth of nasty punishment at the hands of Valdez and he ended up with a broken nose a bad cut under his left eye. At the end of the fight, Quigg’s face was unrecognizable. It was badly bruised and nose had swollen up to the point where he looked nothing like himself.

The good news for Quigg is his opponent for tonight, Carroll (17-1-1, 3 KOs), isn’t much of a puncher. With a career knockout percentage of 15.79%, Carroll isn’t much of a threat to stopping Quigg. However, the combination of Quigg’s inactivity and the beat down he suffered against Valdez, it evens things out for tonight’s fight.

If Carroll were fighting the pre-Valdez version of Quigg, he’d probably stand very little chance of winning, but that’s not the case. Quigg has slowed his own career with inactivity, and the fight with Valdez took a lot of him. Just how much we don’t know. That’s what Hearn is anxious to find out tonight, as we all are.

“A lot of people talking about it, and it’s ‘what does Scott Quigg has left in the tank,’” said Hearn to IFL TV on Quigg’s fight against Carroll tonight. “There’s nothing to think that he won’t have a lot left in the tank. His last performance in Boston [against Mario Brione] was really good, but he [Quigg] has been out of the ring for over a year with an injury.

“We’re going to find out everything we have to know. I think if Scott Quigg loses tonight, he probably retires because I don’t think he would want to box anything other than at the world level. If Jono Carroll wins, it’s a massive win for him,” said Hearn.

Quigg is a massive favorite to win tonight, and there’s no way of comparing the two. Carroll has struggled mightily when fighting on the world level in losing badly to former IBF 130-lb champion Tevin Farmer by a one-sided 12 round decision last year in March. The other notable fight for Carroll was a 12 round draw against fringe super featherweight contender Guillaume Frenois in December 2018.

It would be a huge victory for the 27-year-old Dublin, Ireland native Carroll if he were to take Quigg’s scalp tonight, and a clear signal for Scott to hang them up. Going into this fight, the biggest win of Carroll’s eight-year pro career was a narrow 12 round split decision victory over John Quigley in 2017. Quigley isn’t a world level fighter though.

“You got Hughie Fury back against Pavel Sour, who he was supposed to fight in Monaco,” said Hearn. “Remember he pulled out the day of the fight with illness. I kind of feel the pressure is on Hughie a little bit. Obviously the pressure is always on because his cousin is Tyson Fury.

“He’s had criticism over the years about his style, and when you think he’s so young, and look at who he’s boxed. Look at his resume. He’s boxed Povetkin, Pulev in Bulgaria, he’s boxed Joseph Parker in a close fight in Manchester. And he has always boxed a little bit negatively.

“I don’t know if that’s 100% his style or just because that’s the level he’s up against. Maybe his confidence [isn’t what it should be]. Now he’s talking about his hand injury he’s had for a long time, and fighting virtually with one hand for a long time. But now he’s saying, ‘Watch tonight, watch the improvement.’

“Now I feel like fans are really quick, we all are, to jump [on him]. If after one round, Hughie boxes negatively, ‘Ah.’ It’s like Okollie, isn’t it? Okollie steps up and gets in one clinch, ‘Oh, he’s always holding this geezer. He’s always holding.’ So I feel like the pressure is really on Hughie Fury tonight to put in a good performance.

“Sour’s not bad. He [Fury] should win the fight, but he’ll have a go. People have got to understand sometime, you’ve got to be entertaining, and it’s not a case of being reckless and getting beat. If you’re entertaining, the fans will entertain you. So I’d like to see Hughie go in and let his hands go, and try and look good.,” said Hearn.

Asking heavyweight Hughie Fury (23-3, 13 KOs) to fight in an entertaining manner is asking too much of him, and Hearn should know that. Although Hughie is still young at 25, he’s been a spoiler since he turned professional in 2013, and that’s something that’s not going to change.

Fury’s opponent 37-year-old Sour is someone that he should be able to knockout if he goes after him early.

Zach Parker vs. Rohan Murdock battle for #1 with WBO

“A really good fight for the #1 position for the WBO super middleweight between Zach Parker and Rohan Murdock,” said Hearn. “It’s the kind of fight where Zach Parker has been waiting for this opportunity. He boxed on a couple of WBSS’s, so he’s not that well known. Rohan Murdock is from Australia, and he’s #1 with the WBO.

“He’s quite unknown as well. It’s kind of gone under the radar, this fight, but it’s a really, really good fight. Zach Parker can fight. I watched Rohan Murdock in the workouts. He looks good, really sharp and strong. Anthony Fowler is fighting [Theophilus] Tetteh. Jack Flatley busted his ankle on Monday, so Tetteh is a late replacement. He’s tough enough,” said Hearn.

One reason why few people are talking about the Parker (18-0, 12 KOs vs. Murdock (24-1, 17 KOs) fight is because neither of these fighters have been fighting world-class opposition in their respective careers. For that reason, they’ve been largely ignored going into tonight’s fight.

“Fowler should look good getting the win. Jack Cullen, Robbie Davies Jr., Dalton Smith, all in good fights. Reshat Mati, the Albanian Bear from Brooklyn, coming over for his first UK fight. Aqib Fiaz. Who else is on the card? Blane Hyland. It starts at 4:30.

“We started doing this thing where we’re trying to televise every fight now. So from 4:30, it’s before the bell with our build-up show, which will now go into the live-action with Parker and Chris Lloyd commentating.

I think there are three fights on there, and then we go Facebook at 5:15 with Sky Sports, and that is Dalton Smith and Robbie Davies Jr. And then we go Cullen, Fowler, Mati, Parker-Murdock, Hughie Fury, Scott Quigg, Jono Carroll. It’s a lot of action. It’s a nice card. You always need a bit of luck, you know? I’m hoping we get a good one,” said Hearn on tonight’s Quigg vs. Carroll card.

Once you get past the main event, the undercard is really nothing special. Hughie is a fringe level fighter facing a journeyman, and junior middleweight Anthony Fower (11-1, 8 KOs) is facing a replacement opponent Theophilus Tetteh (19-7-2, 12 KOs). There’s not much to see hear. Hearn usually puts together great undercards, but this isn’t one of them. He has some excellent fighters on the card, but they’re facing woefully bad opponents.