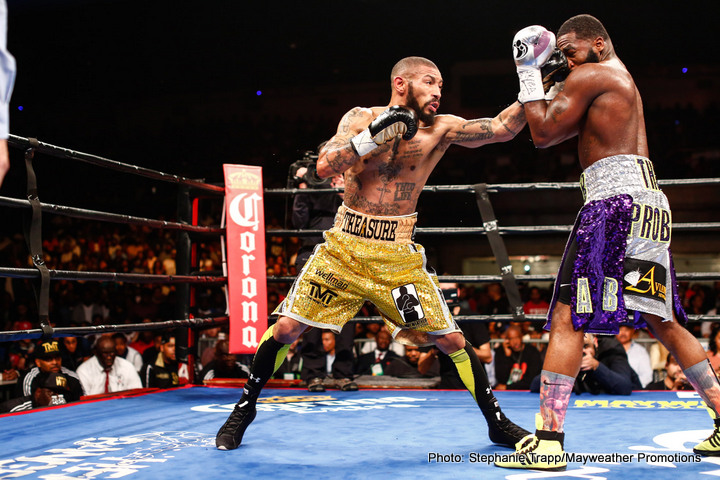 By Scott Gilfoid: The recently knocked out Ashley Theophane (39-7-1-KO11) says he wants to face new WBA light welterweight champion Ricky Burns (40-5-1, 14 KOs) because he feels he would make for a good opponent for him. Burn won the vacant WBA light welterweight title last Saturday night in stopping Michele Di Rocco in the 8th round at the SSE Hydro Arena in Glasgow, Scotland.

Theophane, 35, was once a sparring partner for Burns, and he feels that he gave him problems during his sparring session. Theophane believes that he’s got the talent to defeat the 33-year-old Burns and take his WBA title from him.

That might be reason enough for Burns’ promoter Eddie Hearn to ignore Theophane and look for someone that he feels certain he can beat.

Theophane has a several strikes against him when it comes to him as a potential opponent for Burns. First off, Theophane was knocked out in the 9th round by Adrien Broner in his last fight in April in a failed attempt to win the vacant WBA light welterweight title. Broner, 26, failed to make weight for the fight otherwise he would still be the WBA champion.

The other things Theophane has going against him is he’s not ranked in the top 15 by any of the sanctioning bodies right now, and he’s also not a huge name. Burns made I very clear after the fight with Di Rocco that he wants to fight a big name.

Two of the names Burns mentioned are Broner and Terence Crawford. Those guys are probably about as big of names as you can get right now at 140. The division has thinned recently with Danny Garcia moving up in weight to 147.

If this is the only fight that Burns can get, it would be kind of disappointing because Theophane is someone that really needs to rebuild his career before he starts talking about wanting to fight for another world title. If Theophane were to get back to back world title shots for the same title, I think it would be grossly unfair to the top contenders in the World Boxing Association’s rankings that have been working their tails off trying to get in position for a world title shot.

Instead of Theophane getting another crack at the WBA title, I think one of these guys should get a title shot:

“The only fight in the UK that interests me is Ricky Burns, because it would be a world title fight.” said Theophane.

Roach: McGregor got beat up a little bit by my guys in sparring »