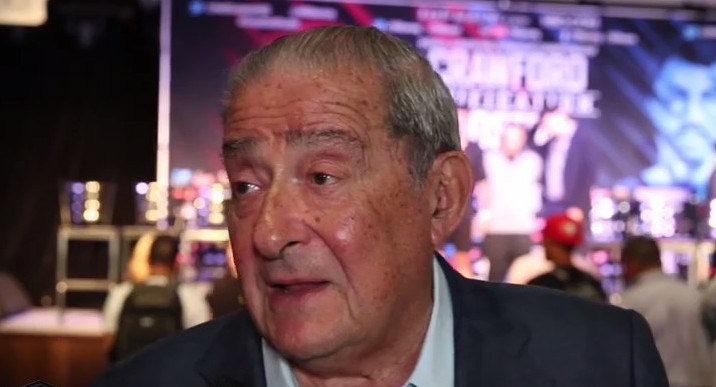 By Dan Ambrose: Top Rank promoter Bob Arum says he doesn’t think former two division world champion Saul “Canelo” Alvarez won’t bother fighting Gennady Golovkin in 2016. Arum thinks Canelo made a mistake in saying he would fight Golovkin at 160, and then changing his mind about it later and backing out. After Canelo defeated Amir Khan earlier this month on May 7, Canelo said he would fight Golovkin at 160.

Arum suspects Canelo won’t fight Golovkin before his own fighter WBO super middleweight champion Gilberto “Zurdo” Ramirez (34-0, 24 KOs) gets a crack at the Kazahstan fighter. Arum wants to match Ramirez against Golovkin at the first available date in 2017. Arum plans on having Ramirez defend his WBO title twice in 2016 against other opponents.

If he wins those two fights, then Ramirez will face Golovkin in early 2017. Ramirez’s next fight will take place on July 23 against Dominik Britsch on HBO PPV from the MGM Grand in Las Vegas, Nevada.

“Canelo dropping the middleweight title doesn’t concern me. What concerns me is what Canelo didn’t say after his fight with Amir Khan. Inviting Gennady Golovkin into the ring, saying he would fight him at 160,” said Arum to Fighthub. “That was stupid. What Canelo should have said is, ‘Look, Triple G is a great fighter and I look forward to fighting him, but first I’ve got to test myself a 160. And then fight [David] Lemieux or somebody else t 160 and see how it goes and then next year fight Triple G.’ But he made himself look bad by saying in effect that he would fight Triple G and then three days later backing out. I met with Tom Loeffler and his first priority is to try to get Canelo. He realizes he probably can’t. If that’s the case, then Gennady Golovkin wants to fight in September. We’re fighting at the end of July with Zurdo. If Zurdo is successful in this fight, we’ll get him another fight in the fall and then look for the first possible date next year matching Ramirez against Golovkin. I’m very friendly with Loeffler, the promoter of Triple G, and we’ll be able to put this fight together no problem. Zurdo is a big, big guy for 168. He can’t move down any further. I think Golovkin can come up to 168 at least that one fight. He could always go back down to 160,” said Arum.

It would be good if Canelo did agree to face Golovkin in 2016, but it remains to be seen whether he’ll do that.