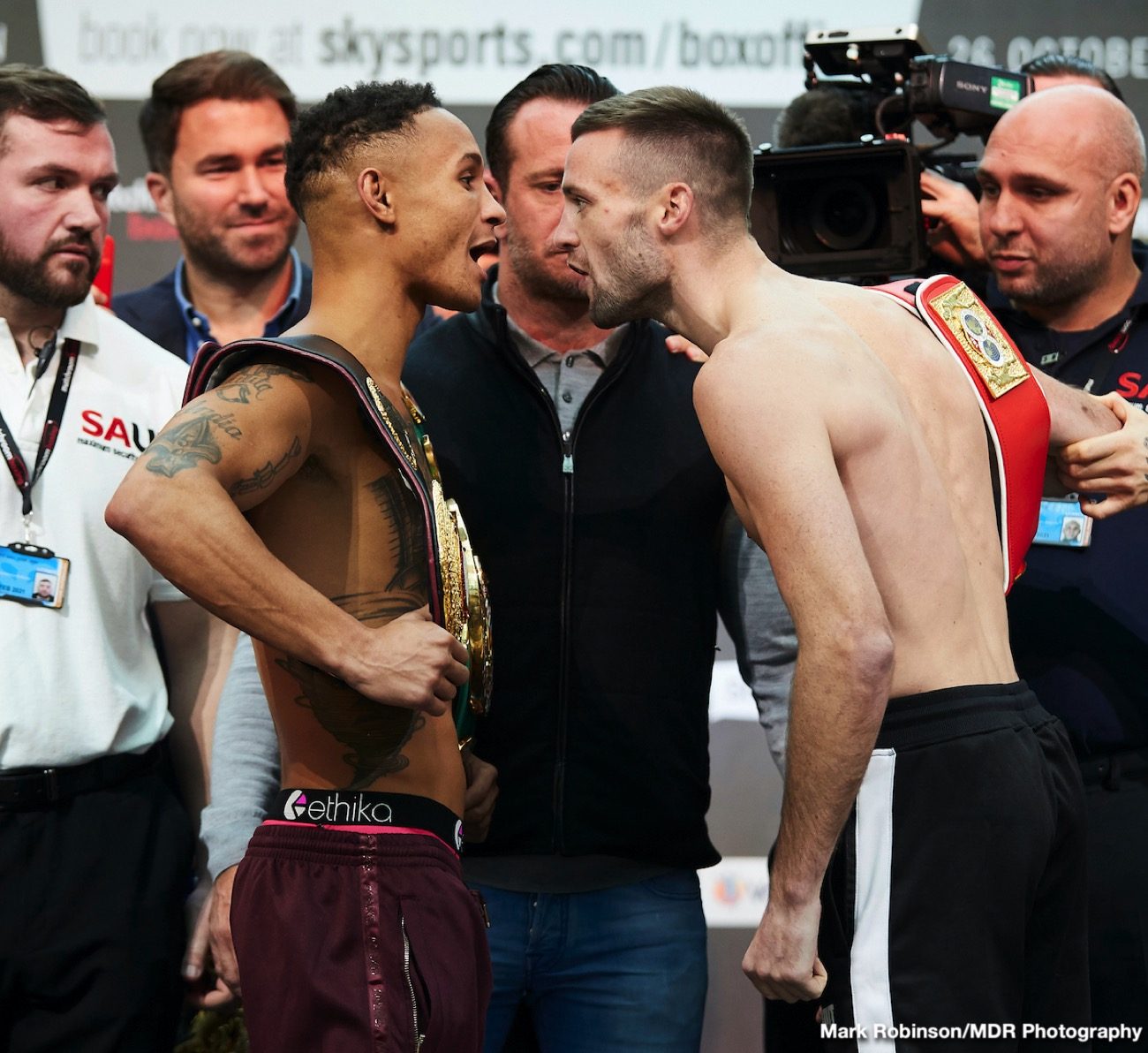 By Barry Holbrook: Tonight the O2 Arena will host three interesting fights with Regis Prograis battling Josh Taylor in the headliner along with Dereck Chisora fighting vs. David Price and Ricky Burns taking on Lee Selby. That’s not all though. Lawrence Okolie faces Yves Ngabu at cruiserweight.

In the main event, WBA light welterweight champion Regis Prograis (24-0, 20 KOs) fights IBF champion Josh Taylor (15-0, 12 KOs) in the World Boxing Super Series 140-lb final. This is a match-up that fans have been waiting for since last year. The card is loaded with fights tonight, but the Prograis-Taylor match-up has hogged all the attention. Those two have attracted most of the attention from the boxing world.

Prograis is too good for Taylor

For this writer, it’s hard to pick against American Prograis, as he’s looking incredibly good right now. He’s got the power and accuracy to win this fight going away. Where Taylor has a problem is fighting on the inside, and that’s Prograis’ specialty.

In watching Taylor’s fights against Ivan Baranchyk and Viktor Postol, he had problems each time those guys got the inside against him. Postol, 5’11”, didn’t need to fight in close, because he had the height advantage over Taylor. But when he did get in close, he exposed Taylor’s inability to fight in close.

Prograis takes this fight by knockout. He’s going to put on Taylor, and blast him out with shots like he did his last opponent Kiryl Relikh. Look for Prograis to stop Taylor by the 7th round. It could be earlier if Taylor gets a little too ambitious.

“The 140-pound division was just floating since Terence Crawford left,” said Prograis. “It was just floating around, and everybody wanted to see who’s the best. For me, I always wanted a fight like this. My first fight [in World Boxing Super Series tournament] was Terry Flanagan. It was only two choices. It was either him or Ryan Martin. For me, I took the tougher test. I just wanted to prove everybody wrong basically. So I out-boxed him for 12 rounds. I hurt him, and he’s never been dropped before. He’s never been hurt. I hit him with a big punch, and I hurt him.

“I proved all those things, and I checked all the boxes for me. And I proved to the world that I had the defense. He barely touched me, and I did 12 rounds easy. I felt like I could have done another eight to ten rounds, because I did it so easy. For the [Kiryl] Relikh fight, I went out and proved that I could do this [score a knockout] too, and I went out there, and barely got touched, and was slick and defensive. And I showed my power. I didn’t get hit in those two fights, and I barely got touched in those two fights. Relikh didn’t hit me or nothing like that,” said Prograis.

Regis: I barely got touched in my fights in WBSS tourney

“In his [Josh Taylor] fight with Baranchyk, he made it a war,” said Prograis. “I wouldn’t have had to do that. Baranchyk wouldn’t have hit me, especially with those wide punches he throws. He wouldn’t have touched me with none of that s—. Look at mine [fights in WBSS tourney], and look at his [Taylor’s]. I barely got touched. That was 18 rounds I fought so far, and I barely got touched. You can be faster, more stronger, and more quicker. You still not going to beat me,” said Prograis.

Regis boxed a masterclass in defeating Terry Flanagan and Kiryl Relikh in the WBSS tourney. Those were VERY easy fights for Prograis. In contrast, Taylor took a lot of punishment in beating Baranchyk. Although Taylor easy beat Ryan Martin in the tourney, that’s a guy that didn’t belong at this level.

Prograis vs. Taylor is best fight at 140 says Diamonte

“I don’t want to disrespect [Jose] Ramirez by saying they’re [Prograis and Taylor] are the two best, but they’re definitely two of the best,” said ringside announcer David Diamonte to IFL TV about Prograis and Taylor. “I don’t think you’re going to get a better fight at 140 than this. And I think this is a boxing fanatics dream, this fight. I’ve been waiting for this fight for over two years. In July of 2018, I hosted the WBSS gala in Moscow, and these guys were the guys I wanted to meet.

I remember it like it was yesterday. They’re both undefeated, and they’re both champions and southpaws. And they’re both in their primes. This is a hell of a fight. I just can’t wait for this fight. This is what I love about boxing,” said Diamonte.

Diamonte is being diplomatic by not admitting that Prograis and Taylor are the two best fighters in the 140-lb division, but that’s the belief the boxing fans have. Watching WBC/WBO champion Jose Ramirez struggle to beat Jose Zepeda by a CONTROVERSIAL decision earlier this year, it’s clear he’s not as good as Prograis and Taylor.

You’ve got guys from different parts of the world,” said Diamonte. “Regis from Houston. Josh is a tough Scottish guy, and he’s a real fighter at his heart. He’s sharp and he’s focused. This fight is a real close one to call. I think it’s a true I’m going to give the 51-49 edge to Taylor in this fight, because I think his boxing acumen. If he can punch in between the punches, it’s all about timing, speed and accuracy. If he can do that, he can create a real problem for Regis,” said Diamonte.

Taylor has looked great in the WBSS tourney in beating Ivan Baranchyk and Ryan Martin. However, those were weak opponents, and not indicative of what he’ll be dealing with tonight against Prograis. Taylor’s performance against Postol last year in June 2018 is more of a true example of where he’s at in terms of talent. Josh BARELY beat Postol, although the scores from three judges had him winning a one-sided 12 round decision.

That wasn’t the fight that took place inside the ring on the night. Postol gave Taylor the fight of his life in coming close to beating him in his hometown of Glasgow, Scotland. Off that performance, Taylor is going to have his hands full against Prograis tonight.

“The problem though for Taylor is he does get hit some time, and Regis punches on a different level than anyone he’s ever faced,” said Diamonte. “He punches harder than [Viktor] Postol, and he for sure punches harder than [Ivan] Baranchyk. Ivan Baranchyk can punch, but he’s more of a volume puncher. Prograis is a true puncher. I wanted a lot of his fights when he was younger, and I’ve seen him punch guys in the chest. It looked like the guys were going to have a heart attack.

“I’ve never seen dudes stop guys with a chest punch. I’m not talking solar plexuses. No, I’m talking chest. Regis can punch, so that’s the equalizer there. In boxing, it only takes one. Taylor is going to have to be very careful, but if he can do that, I think he has the edge in this fight. It’s very slight, but I think he has the edge.

David Price (25-6, 20 KOs) has looked sharp recently in winning his last three contests, and he’s going to be ready to hand Dereck Chisora (31-9, 22 KOs) his 10th career defeat tonight. It doesn’t seem likely to happen though, as Chisora punches hard, and is in the best shape of his life. Chisora knows what’s at stake for this fight, and that’s why he pushed extra hard to get in tip top shape.

Chisora is coming off one of the most impressive performances of his career in stopping Artur Szpilka last July.

Chisora wins by a 3rd round knockout. Price is too weak in the chin department to last more than 3 rounds.

Unbeaten Lawrence Okolie (13-0, 10 KOs) challenges EBU cruiserweight champion Yves Ngabu (20-0, 14 KOs) for his title tonight. Okolie is a knockout waiting to happen. He’s got good power, but he’s all arms and legs. Ngabu could win this fight if he can keep Okolie from clinching him all night. Look for this to be an ugly fight with a lot of holding by Okolie each time he misses with a shot. He fights like he’s not altogether coordinated. Okolie is too flawed to go far in the cruiserweight division, but he’ll likely still win tonight.

Okolie wins a 12 round unanimous decision.

Former three division world champion Ricky Burns (43-7-1, 16 KOs) faces former IBF featherweight champion Lee Selby (27-2, 9 KOs) in a 12 round fight tonight. Both of these fighters have seen better days, and they’re playing out their string. Burns, 36, is the bigger and more talented guy of the two.

The 32-year-old Selby looks shot to pieces. In his last fight, he won a controversial 12 round decision over Omar Douglas in February of this year. Selby was fortunate to get the win, as a lot of boxing fans thought Douglas was the better guy. In Selby’s fight before that, he was beaten handily by Josh Warrington last year in May 2018. Warrington beat the weight drained Selby with ease.

Burns wins easy 12 round decision. Selby lacks the power to fight at 135, and he’s going to get taken apart by Burns in this fight. It would be a good idea for Selby’s corner to have the white towel ready to throw in the ring to pull him out. 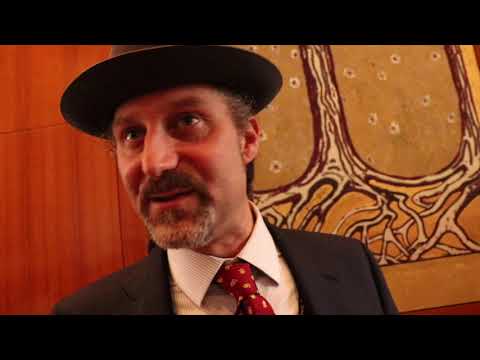